As the earth rotates, the zenith shifts almost half a kilometer westwards every second, if you are at the equator. Even in Tawang, this is close enough to the truth. It was also close enough to the truth to assume that dawn broke when the zenith was 90 degrees to the west of the sun and sunset was when the zenith moved 90 degrees to the east of the sun. A little correction, and that gave us 10 hours to cover the relatively small distance from Tawang to Bomdi La. The earth itself presented us with tall barriers, but we also handicapped ourselves by losing the first four hours of sunlight to the slow process of waking up and having breakfast. In terms of actual movement our progress was rapid: three and a half hours from Tawang to Se La, including breaks, another two hours to Dirang, and a final one and a half hours to Bomdi La. If we had really tried to race the earth, we could easily have reached Tezpur between dawn and sunset.

But it was nice to stop now and then. At Jang I spotted an ATM and stopped to get some money. In Tawang my card had crashed one ATM, another refused to accept it, and a third had long queues. The the Avatar spotted a petrol station and insisted on topping up an already nearly full tank. This gave The Family time to do some useful birding. Then further on we stopped to look at a frozen stream. The temperature had fallen due to the snow fall near Bum La the previous night, and even at 11 in the morning the temperature was just a little above freezing. The edges of the stream had formed ranks of icicles, with ice stalagmites reaching up from below each (photo below). The stream itself looked frozen. If you looked closely, then below these plates of ice you could see the slow trickle and flow of the stream. For people like us, from the steam-bath of Mumbai, this was a fantastic sight.

We stopped at a point just below Jaswantgarh for a last look at Tawang. Far below us the Tawang Chu flowed in its valley, and in the distance we could see the sloping plateau on which Tawang town rests, the monastery perching on the highest ridge on the plateau. A couple of bends in the road on, we were at Jaswantgarh. We stopped for the samosas. The free tea warmed us. Half a week ago there were as many tourists coming south as going north. Now we saw nobody on the way north; perhaps they would arrive later in the day.

From Jaswantgarh it was a steep climb to Se La. A wind blew up the valley of the Nuranang river as we climbed. When we reached the tip of Paradise lake, I asked Avatar to let me off. I wanted to walk the rest of the way and meet up with the gang at the army canteen at the pass. This lake looks like an artificial lake created by damming a stream. Reading the histories of the India-China war of 1962, it seems to me that this must be part of the old effort to fortify the pass and use it as a fall-back position. This strategy had failed in 1962. One hopes that the rivalry between India and China never reaches a stage when it has to be tested again.

Although we had reached the edge of the Tibetan plateau in our trip, I had the feeling that I had not walked enough. Now, as a cold wind blew up from the valley behind me I had a wonderful walk. I was at a height of over 4000 meters, and the only vegetation around me was sparse grass. The sky was blue and nearly cloudless. Around me circled a mass of large black birds; crows, I thought first. But their calls were more musical. As a small part of the flock landed near me I recognized them as yellow-billed choughs. I walked on in the cold breeze, the desolate landscape, the absence of people, the call of the choughs. I wished I had had more time during this trip for such walks. My hour was soon up, as I arrived at the army canteen to meet up with The Family and the Victors. 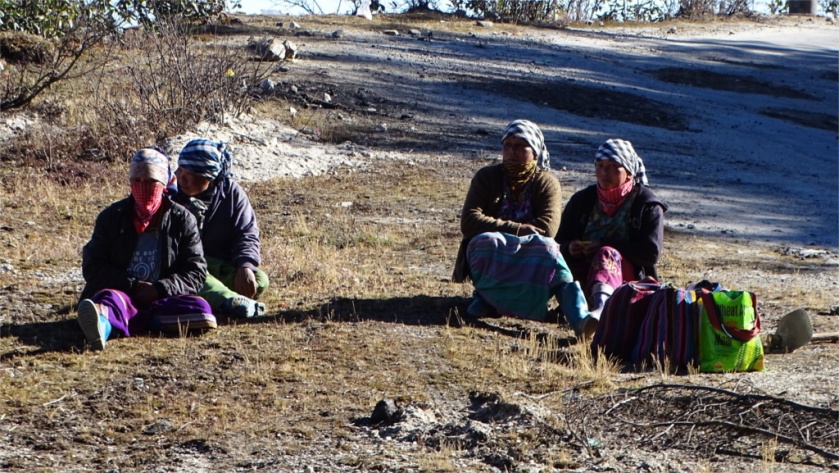 It was a little warmer on the other side of the pass, but still cold in absolute terms. Work gangs were repairing the monsoon damage to the road. The lack of technology was remarkable; and it meant that there were people working at jobs which did not need them. More than anything else, this drove home to us how poor and underdeveloped this part of the country remains, in spite of the pious hopes we read about in newspapers. Later in the day we passed a small village, and when The Family saw a pretty young girl walking along by the road she wondered aloud what this girl could expect out of life. A little below Se La I saw this group of women from a work gang taking a little rest. It was so cold that they had covered their faces. Life in India is hard for many people, but it seems much harder up here. The pursuit of happiness is a luxury here.

We reached Dirang before sunset, and stopped at the market for a samosa chat at the bazaar’s most popular spot: Sanjay Hotel. The public toilet in Dirang bazar turns out to be very clean, and a boon to travelers. We pressed on. The sun set before we reached Bomdi La. It became dark very quickly, but as we climbed it got a little lighter. I stopped to take a shot of the last colours in the sky. Trucks were passing by, headlights blazing. I managed to catch one such headlight painting the vegetation by the side of the road a lovely yellow to go with the dark hills and the fading sky. We drove into Bomdi La in time for tea. We would have an early dinner and turn in, because there was little to do after dark in this little town. The next day was a short drive down to the plains. Our holiday was almost over.

9 thoughts on “Racing the earth”