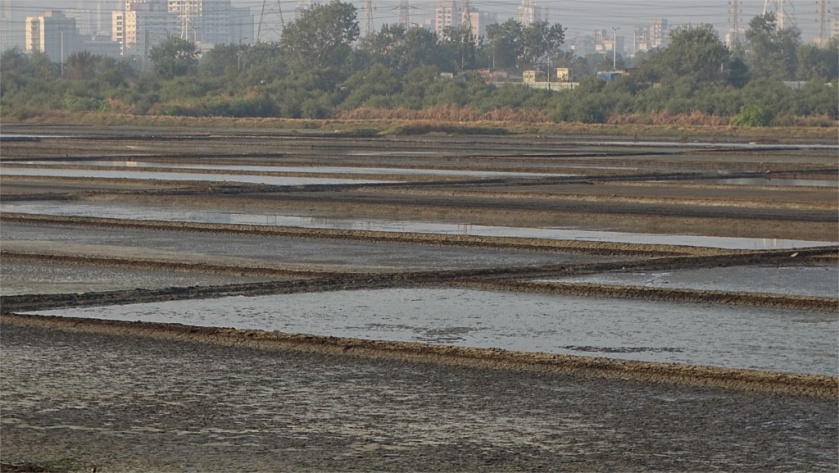 When you travel along Mumbai’s eastern artery, past Chembur and towards Thane, you see empty lands on the eastern flank of the city, broken occasionally into the regular grid-work of salt pans. This neglected part of the city hides some of its best bird-watching spots. One which has attracted much attention in the last few years is the Bhandup Pumping Station.

Few people used to know how the city disposes of its considerable volume of sewage. Now, most birders in the area know that this involves a network of aeration tanks which allow the material to be degraded by bacteria until it is deemed safe enough to be pumped into the sea. One of the places where this is done is the Bhandup station. A fantastic bonus (to misuse a phrase invented by Elisabeth Lloyd) is that the local enrichment of the sea water increases the population of marine species, so attracting water birds, and birders, to the location.

I’d been there with a bunch of very good birders a couple of years back. Today, alone in a taxi on the highway, on a whim I asked the driver to turn in to the pumping station. We found our way in. When the sounds of the highway faded to a distant roar, I stopped the taxi and got off. There was a narrow path through the grass towards the east. I told the driver that I was going to walk in, and he could either stay with the car, or come with me. He elected to walk with me.

On our drive in we had seen many boards announcing that the area was a protected wetland. As soon as the engine was switched off, I could hear a variety of bird calls around me. I saw a flock of small birds descend on the path to pick at something. I took a couple of long shots: they turned out to be a mixed flock which disappeared into the tall grass as soon as I moved on to the path. I’m a terrible spotter; when I’m birding with The Family I’m totally at her command. Now I could barely spot anything apart from occasional small birds through the thick of the grass (you can see one between the stalks in the photo above; it was a little larger than a sparrow, rust on top and a blue or bluish grey below).

I could hear the sound of water birds splashing around to my left. Mangroves obscured my view. Above me I could see various birds flying: egrets mostly, but also some swifts, various gulls and terns, a stork. The gap to the sky was small, along most of the path, so these were flashing glimpses. However, because we were also obscured by the trees, several of the birds flew very low overhead. I saw a small egret fly an arm’s length overhead. Away, to the right, I saw the electric blue of a kingfisher flash by. My companion was marvelling at how the place reminded him of his village. A family of common coots swam past. I saw a cormorant drying itself. My bird list did not grow much.

The light was wonderful. The few birds I managed to photograph looked spectacular in this light. I had to agree with the taxi driver, if you forgot that we were walking across a narrow causeway between two arms of a creek then the foliage looked like it could be a village well outside of town.

When I got home, The Family was preparing for a presentation she has to give tomorrow. She laughed at my small bird list, and agreed to come with me next week.

Part of the reason the bird list is so small is that the tide was high. At low-tide you see many water birds picking at food in the exposed mud.

4 thoughts on “A drain inspector’s report”