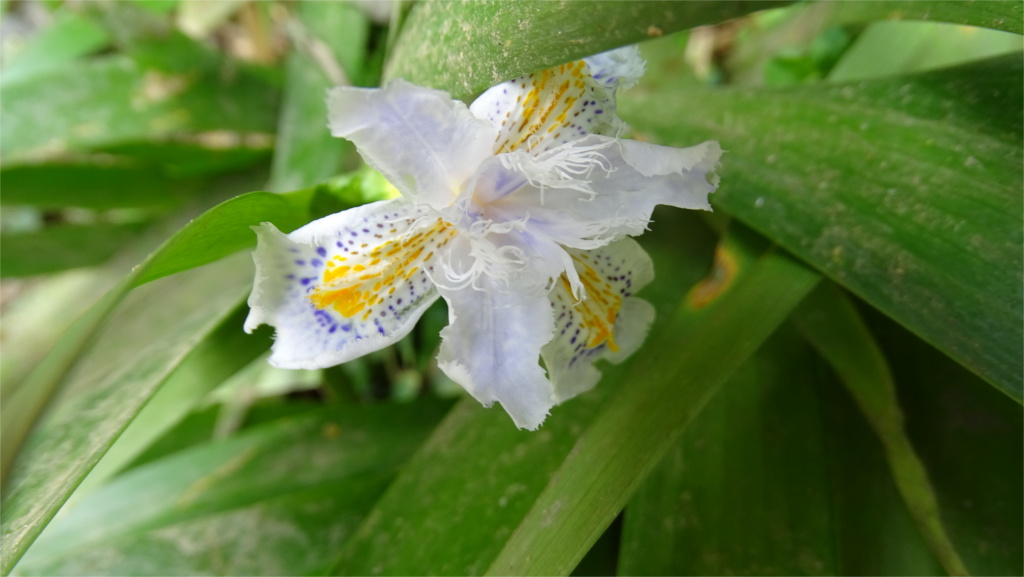 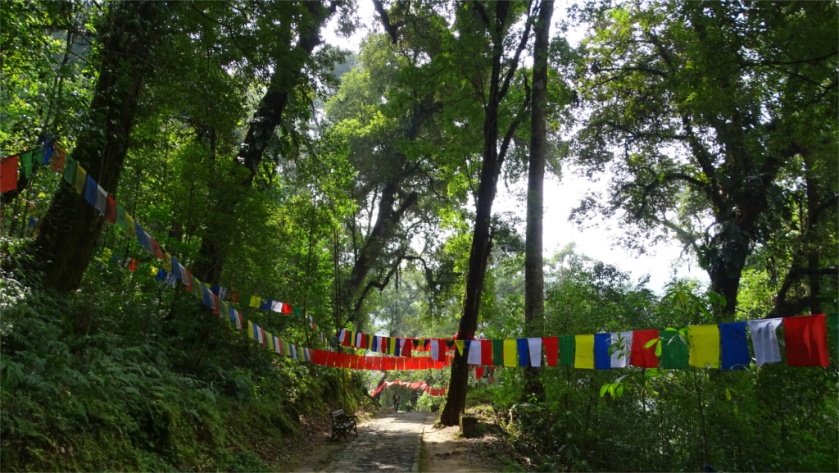 The lake near the village of Khecheopalri should properly be called Sho Dzo Sho, but every hotel, driver and web site calls it the Khecheopalri lake. Hem Kumar drove us from Pelling to the lake. The morning was bright and sunny, although Kanchendzonga remained obscured by clouds since before sunrise. There is parking above the lake, some stalls for food, and a toilet. These are ringed by notices which tell you that the lake is sacred, and lists things you must not do when you get to it. The lake is holy to Buddhists as well as Hindus. We’d read how this lake was considered as holy as Yuksom, Tashiding and Pemyangtse.

We were happy to pay ten rupees each for tickets, since this money goes towards conservation. The ticket told us that this was a "wish fulfilling lake" and that visitors are blessed with health and happiness. The happiness bit we could easily believe. A very pleasant path leads from the parking lot to the lake. It was cool and sunny. The light filtered through the green leaves and streamed on to lines of colourful prayer flags hanging across the path. We passed people walking back to the parking, talking in low voices which did not break the serenity of the place. The tourist season had not yet started, but the worst of winter had passed. There were many flowers by the path. I stopped to take photos of some Iris. There was a prayer wheel and a chorten by the path. We decided to look at them on the way back up.

The lake is large. When you get down to it you see only one corner. There is a monastery on the neighbouring hill, and it is said that you get a complete view of the lake from it. Hem Kumar later told us that the monastery is more than a kilometer uphill. It didn’t look likely. The Family and I decided to do the walk on our next visit. The part of the lake we saw was full of prayer flags. Many people had made cairns of five flat stones, signifying luck, along the path. We looked around for flat stones, but couldn’t find enough. In any case, The Family said, our luck brought us to such a serene place.

We arrived at a little covered pier which jutted out into the lake. A signboard at the entrance to the jetty asked us to take off our shoes. Both of us were wearing our trekking shoes, and I felt a bit lazy about taking it off. In a temple when you are told to take off your shoes in order to walk into a sacred area, you may keep your shoes on just outside this area. I followed this principle but made an error of judgement due to the placing of the signboard: I thought of the pier as the sacred area, not remembering that the whole lake was sacred. I kept my shoes on and walked through the bog surrounding the water. Some carps milled around below the surface of the water near the pier. Soon a guardian monk spotted me and shouted at me to get back. I walked back apologetically. The Family was more rule-abiding, and had a much better time at the lake.

It is said that the surface of this lake is always clean; that leaves do not float on the surface. This was certainly true while I looked at it. Since the lake is surrounded by a tree-less bog, the story could have a natural explanation. Far away I could see a group of ducks fishing together. They were at the extreme range of my camera, and the reflection from the surface of the water made it difficult to see colours. What we could see, including the social fishing, led us to identify these as common Mergansers. This is about the southern limit of their wintering range. We were lucky with the place, and also with the time, because they would probably be gone in a few weeks.

On the way back we stopped at the large chorten we had seen. It was taller than a man, and very decorative. A depression visible in a stone near it is said to be the footprint of Guru Padmasambhava. Inside a glass front, the chorten held a statue of Tara. One of the origin stories involves Tara, whose footprint caused the lake to form. The other says that Shiva’s feet caused the depression. The truth is as awesome: it seems that glacial action carved out this lake several thousand years ago. The various beliefs about this lake mean that there are religious festivals associated with it.

The festivals occur in Magha Purnima, Falgun Purnima and Nag Panchami, and generate about 3 metric tons of solid waste every year which pollute the lake. Increase of population in villages near the lake has put increased pressure on surrounding forests due to demands of grazing lands, and removal of forest biomass for human use. As a result, the forest is degraded, and the water holding area has decreased. We understand that corrective steps are being taken.

We saw few birds. The common Merganser was one. We heard many birds while walking through the forested path to the lake, but couldn’t spot any. The growth was too thick. The unseen birds included some warblers. From the car park we had a view of the tree-tops. A rufous tree pie was sitting on a high branch of a bare tree. Some common pigeons flapped around the tea stalls. There were no raptors flying in the sky. The lack of birds was partly due to the fact that it was now pretty late in the morning, but also partly because birds had still not migrated up from the plains. We will take this into account in our next visit.