I must have read about the Centrale Montemartini some time. When The Blessed told me about a museum where Roman statues stand majestically poised against electrical generators from the thirties, it rang a bell. An added attraction was that it was not in the usual touristy regions of Rome, but in the grungy Ostiense Marconi district near the Tiber. So I accompanied my Rich Friend and The Blessed to the museum.

For us the easiest way to get to the museum was to take Metro B, get off at Garbatella station and walk the short distance to the museum. It does not look very special as you walk in.

The power station was opened in 1912, and initially produced 7 MegaWatts of electricity. A decade later another 9 MegaWatt capacity was added. In 1933 Benito Mussolini inaugurated the two diesel generators from Franco Tosi, which together produced 12 MegaWatts of electrical power. When the plant was decommissioned in 1963, it would have been producing significantly more power with the added diesel equipment from Brown Boveri. The building with its mosaic floor is an example of the transitional industrial architecture of the early twentieth century. Its conversion to a museum space was the first time such a transition was made.

The top level of the museum, called the Boiler Room, contains some of the art which I liked most. These included two mosaics: a huge hunting scene with deer, rabbits, a boar, dogs and human figures from the 4th century CE was found in 1904, and another which portrays the changing seasons. In one corner of this hall I found a emotional sculpture of the flayed Marsyas. He was a faun who challenged Apollo to a musical contest, lost, and was flayed as a lesson to others. This level is full of smaller sculptures which I found very moving.

The main Hall of Machines (featured image) is dominated by the two diesel generators. Here I saw two female figures in a dark igneous stone; they are called the Celian Hill figures, and date perhaps from the 1st century AD. One of them is named the Victory of Simmaci. The head shown above is a copy of the head of Agrippina the Younger, more easily identified today as the mother of Nero. The 3rd century marble head in the previous photo is unidentified, and was found in 1933 in Rome.

The entrance level of the museum is called the Hall of Columns, and contained some of the exhibits which surprised me the most. One was a statue of a person wearing a toga and carrying two busts in his hand. Apparently in the 1st century CE, middle class families appeared in public with busts of parents and grandparents, in order to emphasize their lineage. 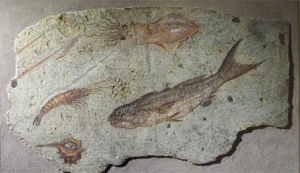 I could begin to understand why at this time the story of Marsyas would have been popular.

This level contains household and funerary objects. The slave-holding structure of the Roman empire becomes visible in the exhibits. The distinction between portraits of Romans and defeated barbarians is interesting to see. The marble sculptures are punctuated by beautiful mosaics.

I was charmed by two marine mosaics from the 1st century BCE. Both of them were discovered in 1888 in Rome near Via Panisperma. The beautifully detailed execution allows you to identify the species. The subtle variations in colour needed for such detail requires immense amount of work to source and shape the tesserae required to execute these pieces. The cost would have been immense. The merchants who could afford to have such work installed in their homes would have been the Roman equivalent of today’s top industrialists.

We walked out into the bleak streets of Ostiense Marconi. The project to turn this into a district of arts and sciences has been stalled by global economics, and the huge contraction in Italy’s GDP.