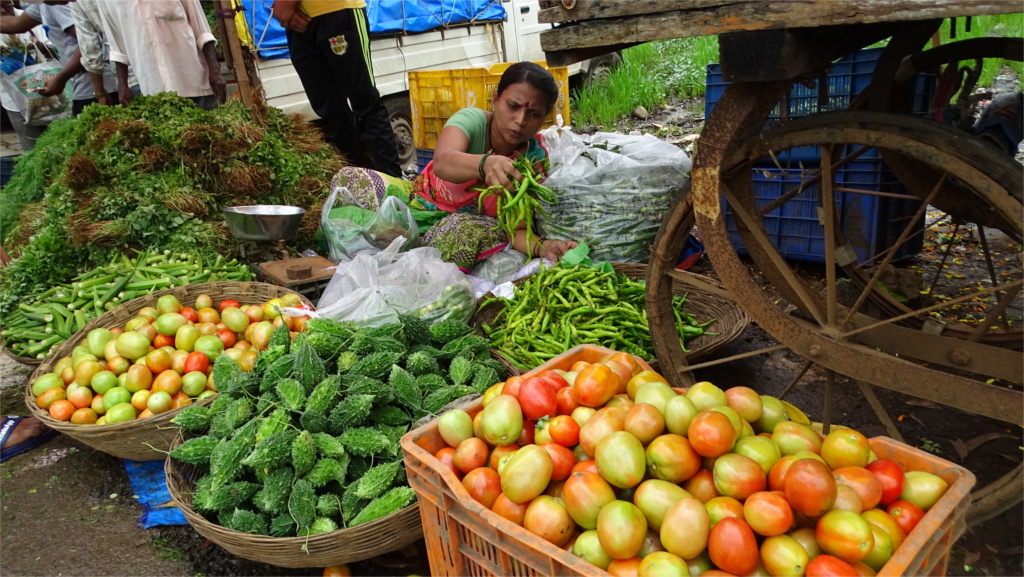 We tried to follow a road which petered out after the market square in Dolkhamb. It was flanked by two long structures. One was an office, and the other, which you see in the photo below, was a row of shops. This was one of the larger villages we had passed in the previous twenty kilometres. Off to one side was a little open space where several utility vehicles were parked: they serve as local buses. The market was crowded. We oozed through it to ask for directions. As we talked to the "bus" drivers, more vehicles arrived, bringing people to add to the crowd.

For some time now we have been trying to eat a larger variety of vegetables and greens than what our meals had reduced to. So the sight of a village market brought out the gatherers in us. On a side of the road was a line of people who had set up makeshift stalls. The featured image shows the lady nearest to us. She had four different kinds of vegetables: tomatoes, knobbly green karela (bitter gourd), fresh okra and large green chilis. Not a large variety, but incredibly fresh. The okra was crisp and snapped easily between my fingers. After her a man sat with small heaps of dried fish. There were fruits further on. The Family bought bananas and apples. The apples were small and not very colourful, but when we bit into them they were extremely flavourful.

Once upon a time these were available in all markets in Mumbai. Now WTO rules force us to import apples which are too expensive to be sold anywhere except in big towns and cities. As a result, these profitable markets are almost completely shut to local apples. We love to eat, and we are not politically committed to local produce. We do like the fact that globalization brings us food from far away, but we are also aware of the variety that local produce can bring to our table. We have read enough about the carbon cost of pushing fruits around continents to begin to take the trouble to visit farmer’s markets. 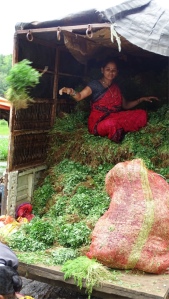 It would be a pity if we were forced to make a choice between the planet and the economy without thinking through sustainable middle paths. (I’m afraid that sentence might succeed in offending both sides of a political divide which exists, but need not).

The most exciting discovery was a truck of assorted greens, presided over by a lady in a red sari (photo alongside). People walked up to a boy, probably her son, paid him and asked for the greens they needed. He would shout out the order, and she would throw it out of the truck. We bought a bunch of fresh fenugreek and coriander greens from the duo. This family also pushes vegetables around in a box which burns hydrocarbons. But they travel tens of kilometres, not thousands. With fresh produce in the car and virtuous thoughts in our heads, we ignited the non-renewable fossil fuel in the tank of our car and drove out along the road the local drivers told us to take.