Since this post is about creatures fairly high up on the food chain of the Kaas plateau, I could start with the top predator I saw: the funnel-weaving spider (family Agelindae) you see in the featured photo. This one had laid down a huge sheet of a web covering several Topli Karvi bushes, and was waiting for food to fall out of the sky. When an insect lands on the web, it usually runs very fast to it and engulfs it in silk. Now, with rain drops falling intermittently on the web, I’m sure this guy had his work cut out, trying to distinguish rain from food. Other insectivores on the plateau are plants: sundews and bladderworts. I’ve written about them elsewhere. 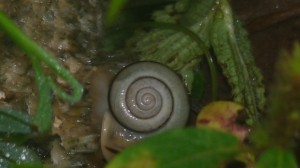 This snail is about the largest animal I took a photo of on the plateau. There are birds; the Crested Lark (Galerida crestata) had put in a hazy appearance in the morning mist. After it started raining we saw no birds. The rain does not stop a snail, as it munches the roots of Topli Karvi bushes. This was on its way from one bush to another, when I saw it. It didn’t seem to move as I took the photo, meaning it would take an age and half to get to the next busg. The western ghats harbour a large variety of land snails; I’m not sure which species this is. Any expert comments?

One of the more common animals which inhabit these parts are grasshoppers. Judging by where it was sitting, this one probably feeds on the leaves of Topli Karvi. It has a silly startled look, as it turns its head slightly to take a look at the relatively large camera lens looking at it. I couldn’t get a shot of the three eyes it has on top of its head. Again, I have no idea what species this is, and have to depend on the kindness of an expert to provide the answer.

A very strange animal was this leaf piercer.

It stood on this leaf for a long while as people tried to photograph it. The early photos show a little spot of sap on its long snout. By the time the last photos had been taken the sap had disappeared: it had done its version of licking its chops. I have no further idea about the classification of this beautiful and strange beast.

Interestingly, none of these animals are pollinators.

This tiny moth which flew on to a Topli Karvi leaf while I watched is also unlikely to be a pollinator. It is quite likely to be another herbivore. Interestingly, the leaf it is sitting on already has been attacked. Usually true bugs (order Hemipteran) attack plants in this way. Unfortunately I didn’t see any.

I didn’t see a single butterfly in my few hours in the Kaas plateau. It was raining, and butterflies don’t like to get their wings wet. More likely, the butterflies had not pupated yet. I had evidence for this soon afterwards when we arrived at a grassy meadow full of caterpillars. I don’t know which butterfly they will metamorphose into, but the complete fearlessness with which they crawled across the ground, and the absence of predators, probably means that they are toxic.

I’m sure I missed a very large number of insects. It was raining hard, so most of them were probably hidden under leaves. Since it was muddy, I was not intent of kneeling or sitting to peer under the low leaves of the Karvi. So I’ll have to leave the job of talking about more beasts of the plateau to someone else.

3 thoughts on “Beasts of Kaas”