I was told that if I happened to be in Lake Inle or its neighbourhood, I should not miss the group of pagodas called Shwe Inn Thein in the village of Indein. We ran into a traffic jam on the canal as our boat approached the village. Many boats were trying to dock. We got off and took a walk through a bamboo forest to reach a covered walk. Our local guide, Ni Ni Leung, had told us about the many shops that line this walk, and warned us not to be distracted. This was good advice. When we reached the site with its hundreds of old brick stupas, we were stunned by the beauty that needs to be reclaimed from decay. Many stupas are in the condition that you see in the featured image. 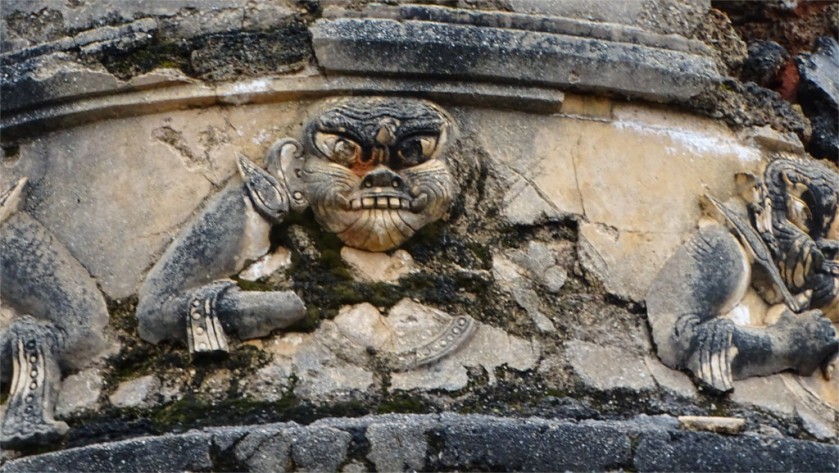 Most of the stupas date from the 16th and 17th centuries CE, I am told. However, the oldest which can be dated comes from the 14th century. The Shan kings founded a state which was roughly contemporary with the Bagan kingdom. It is said that Anawratha, the founding king of Bagan, erected a stupa in Shwe Inn Thein. Later I read that it is believed, by some, that the site hosted stupas from the time messenger monks from the Magadha empire, dispatched by the Indian emperor Ashoka, brought Buddhism to this area. Apocryphal stories of miracles and great antiquity often adhere to places which are old. So I don’t know whether this is true. However, in the spirit of that most wonderful of guide books, The Hitchhiker’s Guide to the Galaxy, I choose to repeat the most colourful story about this site.

I saw much renovation going on: ancient stupas are being covered in undecorated plaster and painted gold. Ni Ni Leung told us more than once of the difference between renovation and restoration. When one sees the renovated golden stupas, one longs for thoughtful reconstruction. The decorations on the old stupas are exquisite, as you can see in the example above, and in the featured image. We saw only one which has been restored with any care. The present government of Myanmar is very culturally conscious. It is possible that it will invest in the education needed to make sure that this site receives the care that Bagan now gets. In any case, this is a sight that should not be missed if you are in the neighbourhood.

5 thoughts on “Two and a half thousand years?”