Lake Inle is one of the largest lakes in Myanmar, with a surface area of over 100 square kilometers. Most of our movement was in very shallow water, through watery villages, and canals cut into various islands.

Only when we took the "highways" between them did we move into deeper waters. Houses on the lake are raised on stilts, as you can see here. A framework, the floor and the roof are made of wood, and often the walls are mats. The space below the floor is a convenient garage for boats. Some of the houses were simply constructed, like the one above. 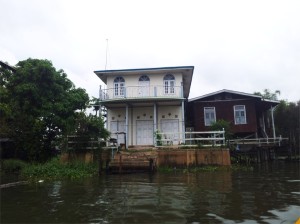 Others were entirely made of wood, and could be very nice looking, like the one in the photo here. We saw houses up to three storeys high.

Occasionally we saw gardens built of mud piles up and held in place by little dikes. There were flowers in such gardens, and also banana and papaya trees. There are large floating farms on the lake. These are made by clumping together water hyacinth and naturally growing reeds together into a living mass secured by bamboo poles. Then ash is poured on it; over this dredged mud from the bottom of the lake is piled on, and you have farm land. We saw tomatoes and gourds growing in these farms, and heard that cucumber and pulses are also grown.

There seemed to be a large population of villages. Shallow areas around villages are fenced off, as you can see in the photo above. This seems to indicate not only the boundary of the villages, but also clear paths of deeper water over which boats can travel at speed.

Closer to a village I caught sight of a man trundling along in his boat using the traditional Inle rowing style: standing up on the boat and poling through the water using a hand and a foot. This wonderful style also leaves a hand available to hold up an umbrella against the continuous rain. But I’m told that the main advantage of the style is that one can stand up on the boat and look down at an angle steep enough to see and avoid snares of tangled weeds.

Within villages the waterways are kept clear, and both men and women row sitting down as usual. I loved the sight of people rowing up and down these little channels, calling out to each other, and coming to a halt now and then when they see someone they want to talk to. It is the Inle village equivalent of walking around the neighbourhood.

I was a little put out by the fact that we were zipping about the lake in a long boat with an outboard motor. I’d expected to spend my days on the lake floating about on row boats. Slowly another fact about living in a lake seeped in. Our boats were the equivalent of what would be buses on the land. The row boats were the equivalent of walking on land. When you want to get from one village to another, walking can be slow, and you might want to hop into a bus. Once I realized this I found, sure enough, that there were other locals on similarly powered boats. As you can see from the photo below, there are two kinds of these "buses". The ones on the left are the luxury buses for tourists, with reclining chairs. The ones on the other side of the canal have no chairs, and are used by locals.

During the first half of November we found overcast skies and drizzle almost continuously, with occasional heavy showers. It makes me quite envious about the photographs I see elsewhere of the lake in bright sunshine. On our "luxury buses" each of clutched an umbrella against the rain. A "local bus" went by with a bright yellow tarp pulled across it to cover a full load of schoolchildren. They grinned at us and waved; I just had enough time to wave back. I wished I had my camera out to catch this wonderful sight.

In the drizzle the conical hats which locals wear seem to be the correct gear to take along. My arms were tired of holding up the umbrella all morning as we looked at the floating garden and reached the workshop of the lotus-silk weavers. What else do people work at on the lake? I discovered that making jewellery is a major trade here.

I groaned a bit to myself when we approached a jeweller’s workshop: an unavoidable stop for tourists. But it turned out to be very interesting. Gold and silver workers were beating out very intricate work. In one corner a girl was threading pearls into a necklace. In front of her was an oyster shell with pearls still embedded into it. 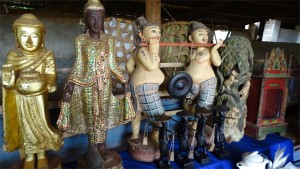 Elsewhere on the lake we saw woodcarvers at work. This seems to be as common here as in the rest of Myanmar. We saw many attractive pieces, some painted, some polished and a few gilded. Among works which looked like traditional depictions of the Buddha or everyday life on the lake were things which were designed for tourists. We saw a pile of beautifully carved boxes in the shape of fish. Inside them were crude figures of cows and sheep, and a mother and a baby. The person showing this to me said "Christmas". One last bit of produce from Inle is famous; that’s the Burma cheroot you see in the hand of the man in the featured photo.

We’d read much about the ill-health of the lake. It was visible around us. Water hyacinth grows in large mats. The floating farms are large, and growing to keep up with the growing population. This is supposed to be the biggest area of concern today. The increasing number of tourists take up many resources, from space for the floating hotels of the kind we stayed in to dirty outboard motors spewing black fumes. Less visible is the slow eutrophication and siltage in the lake, leading to the growth of bacteria and algae. One sign of this was the price of water.

The lake is beautiful and relaxing, and I hope that things turn around.