We stopped near a peaceful lake on an afternoon in Ranthambore. It took a little while for us to see the crocodiles lying on the bank: you can see them near the reflected glare of the sun in the photo above. They must have just come out of the water and were basking in the sun, warming themselves again.

The Indian fresh water crocodile, also called the mugger, is one of the thirteen species of crocodiles presently found around the world. One of the things about crocodiles that I find really interesting is its jaw. I’ve often seen them sleeping with their mouths open. Apparently this is a way for them to cool off, like the panting of dogs. Their jaws can exert a pressure fifty times more than ours, so for crocodiles biting through a leg is probably as easy as biting through an apple is for us. But they have very little strength in opening their jaws; even a rubber band can keep one from opening. This must be the esoteric knowledge that crocodile wrestlers use. 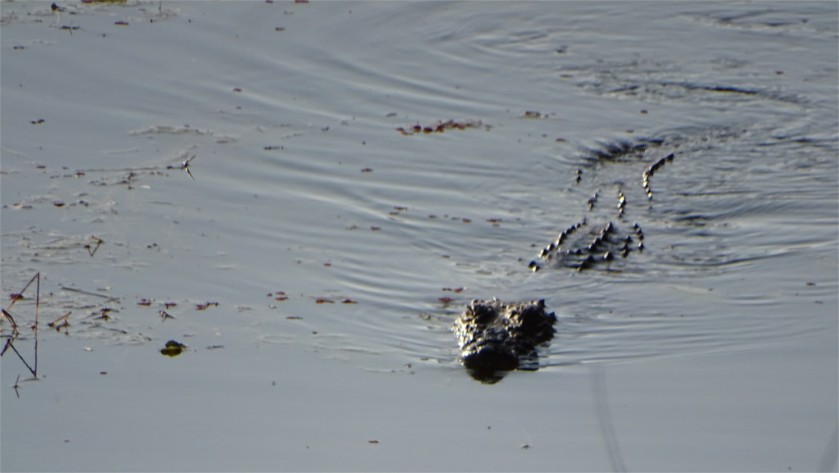 When I saw a crocodile glide through the water (photo above) it was not hard to imagine that it can get to a speed of over 30 Kms an hour. It looks perfectly adapted to the water. It is a very successful hunter, with acute senses: colour vision, smell and hearing. I’ve never had the luck to see a crocodile make a kill, but I’m told it crushes the victim with its jaws and swallows it whole. I’ve also heard that it swallows small stones to help with digestion.

This is entirely believable, because some birds do this, and crocodiles are closely related to birds.

Earlier in the day I’d seen a crocodile motionless on a spit of land jutting out into a lake. Its stomach seemed full. Someone asked whether it had just eaten. No one knew the answer. I searched later but could not figure out how long a crocodile takes to digest food. Did we just miss a kill, or had it fed more than a day ago?