We decided to spend a couple of days in Bangkok imagining a relaxed time in a large city on the way back from Myanmar. We did manage to relax, but in taxis stuck on the road. On one memorable occasion, during the evening rush hour, our taxi took more than half an hour between two successive traffic lights. According to a year-old article, during the evening peak hours, Bangkok’s traffic moves at one-tenth the speed it would have on a clear road. On the average the traffic moves at half the speed that it would have on a clear road.

One sure sign of bad traffic is multiple layers of roads and flyovers. In the featured photo of Bangkok (taken near Sukhumvit) you can see the road, then the pedestrian walkway from which I took the photo, a flyover for road traffic, and an elevated corridor for the metro. This photo was taken a little after three on a weekday. Two hours later, the traffic was a standstill. 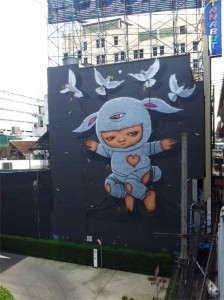 I’ve seen such multiple layers of roads in China before, and they are now coming up in India.

Some claim that Bangkok’s traffic has become worse since the government decided to refund the tax to first-time car buyers. Mumbai had prepared us for Bangkok. When we were stuck in traffic, The Family and I tried to take it as an opportunity to spend some quality time talking to each other. When we couldn’t bear the incredible joy of being thrown into close contact with each other for long, we took the sky trains. The coverage of the city is minimal, but at least it can be used to reduce the distance you have to travel in traffic. Another joy of travelling by metro is that you get a view of really kitschy hoardings meant to cover up construction sites (above).