Our time in Bhutan was coming to an end. We checked out of our hotel in Bumthang and spent the day driving to Lobeysa, a long drive. We passed again through the mixed forest on the way down, catching glimpses of the wonderfully greenish-blue Verditer Flycatchers (Eumyias thalassinus), black drongos with their forked tails (Dicurcus macrocercus) and the bright colours of Scarlet Minivets (Pericrocotus speciosus), 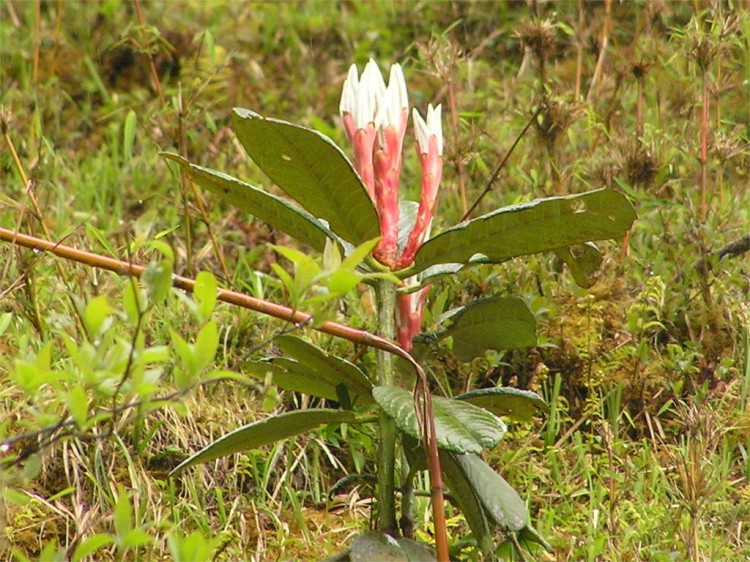 On our way up, we’d seen that there was no food on the road, so this time we packed lunch. When we stopped to eat we saw this interesting orchid poking out of the ground next to the road. I have no identification. Can anyone help?

At another stop we saw what looked like a piece of fungus growing on a stone (highlighted in the photo above). Then suddenly it began to move like a caterpillar, its body hunching in the little waves that propel a caterpillar forward. Before I could change the setting on my camera to take a video, the primitive animal had disappeared into a crack in the stone. What a marvellous piece of camouflage. I guess that this was the larva of a Geometrid moth.

Then as we came lower we entered a zone of the forest full of Dendrobium fimbriatum orchids growing on trees. We probably caught them at the end of their flowering season, but they were spectacularly in bloom along kilometres of the road. We wondered how we’d missed seeing them on the way up. They are fairly common and can be found in many parts of India, the Himalayas, and south-east Asia. Still, it takes unspoiled forests of the kind that exist in Bhutan for it to bloom so spectacularly. Bhutan is estimated to have around 500 species of orchids, so we scarcely observed the surface of this immense diversity.

Many years later I came across the wonderful travel book called The Riddle of The Tsangpo Gorges by Frank Kingdom Ward which describes the flora of Tibet and the eastern Himalayas. As I begin to end the description of our trip through Bhutan nine years ago, the wonderful first line of the book comes to mind: "I have often observed that no matter how much I read about a foreign land before visiting it, I find by experience that it differs widely from what I expected."