When you try to spot a tiger in the wild you spend really long hours in one place. If you are lucky, you will have found shade. If this is near a waterhole, then there are many things to watch as you wait. On a burning summer afternoon, I watched a band of gray langur as I waited for a tiger. They had found a leafy tree to settle in, and, after the first couple of minutes, ignored us as they went back to their normal life. A few would venture cautiously down to the water’s edge now and then, after surveying the area for any sign of danger, dip their faces to the water to drink. They would then saunter back to the tree with their tails held parallel to their body, pointing forward.

It wasn’t just tigers that would send them back up; it was also the burning afternoon sun. As I tried to photograph them, I realized that they were all huddled in the shade. As a result, they mainly presented silhouettes to the camera. Most of their time was spent grooming each other. I liked the sight of one with an arm raised, as another groomed it (featured photo). It looked so comfortable that I wished we could spend some time in the jeep scratching each other’s backs. 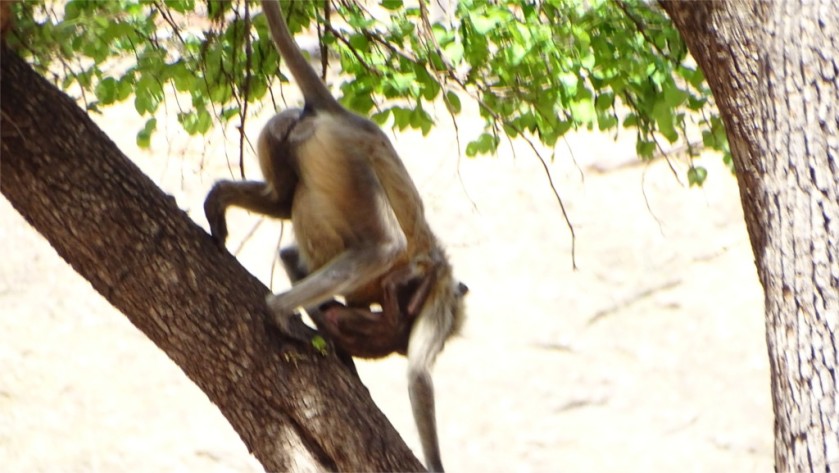 I couldn’t figure our whether this was a band with multiple males or just one. The male langur are generally larger than the females, but in a band dispersed on a tree, some hidden, it is hard to figure this out. There were several young which chased each other round the branches. Two especially boisterous ones swung from the tails of some adults, who ignored them completely. There were several babies clutching on to their mothers. I managed to get a photo of one only when the mother moved from one perch to another (photo above). Langur are generalized herbivores, happy munching leaves, fruits, and flowers. They are also reported to eat larvae of insects.

A sudden commotion brought us upright. But it wasn’t a tiger. A small band of rhesus macaques had wandered into the tree. There was much chattering, and running around. In the shadows it was not clear whether the langur were more agitated than the macaques. But soon the macaques were gone and the langur were back to their quiet grooming. Their size allows langurs to dominate the smaller macaques in the wild. Nothing much more happened, and the afternoon was soon over.

2 thoughts on “A long and lazy afternoon”