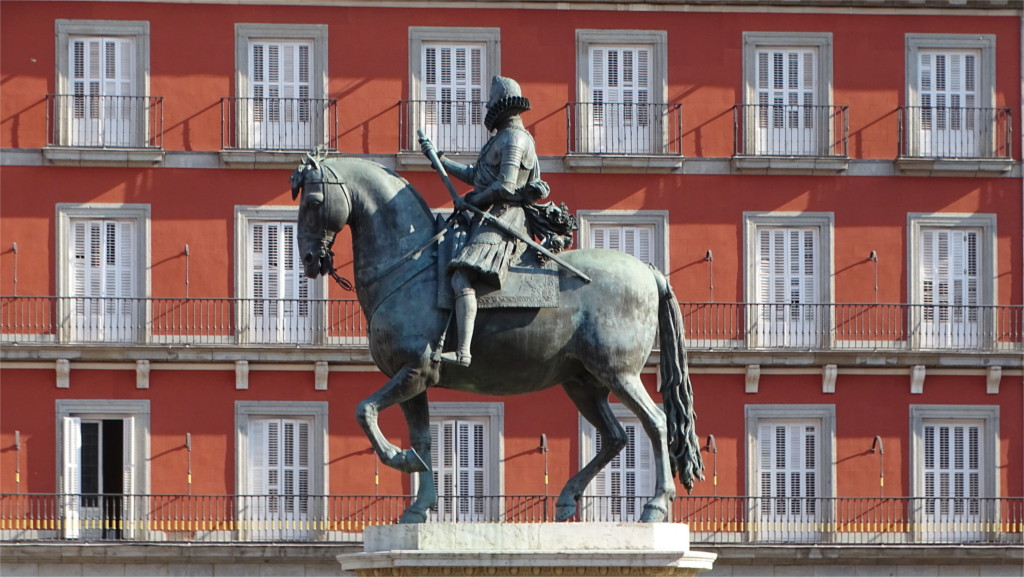 Plaza Mayor today is a fun place: a large enclosed pedestrian square lined with cafes, restaurants and shops. We strolled through the surrounding arcades, window shopping, before we decided to eat at one of the restaurants around the plaza. The plaza was alive with people in the warm summer evening, as you can see in the video below. There was nothing to remind us of the public executions, beatifications, bullfights, or the burning of heretics by the Inquisition.

If you read the history of the plaza, you see an emperor’s desire to remake the city into a grand capital by removing what must have been a congested marketplace at the crossing of the roads to Atocha and Toledo. Juan de Herrera drew up the plans under Philip II but construction started only in 1617, during the reign of his son. This is why the equestrian statue of Philip III stands in the middle of the square, as it has, intermittently, over the last couple of centuries. The present look of the square dates from after the fires of 1790s, and is due to the appropriately named Juan de Villanueva. I did not take photos of the frescoes made in 1992 on the northern facade to celebrate Madrid’s year as Eucrope’s cultural capital.