The Memorial to Murdered Jews is a strong name. I was aware of the many different responses to this memorial to the Holocaust two blocks away from the Brandenburger Door. One opinion was voiced in an article in Der Spiegel, which asked “…is it really possible to sense mortal fear? And how exactly can it be triggered by this mass of concrete, surrounded as it is with the street noise of a busy metropolis?” This was a response to Wolfgang Thierse’s assertion in the Bundestag that a space has been created which lets you feel “what loneliness, powerlessness and despair mean”. 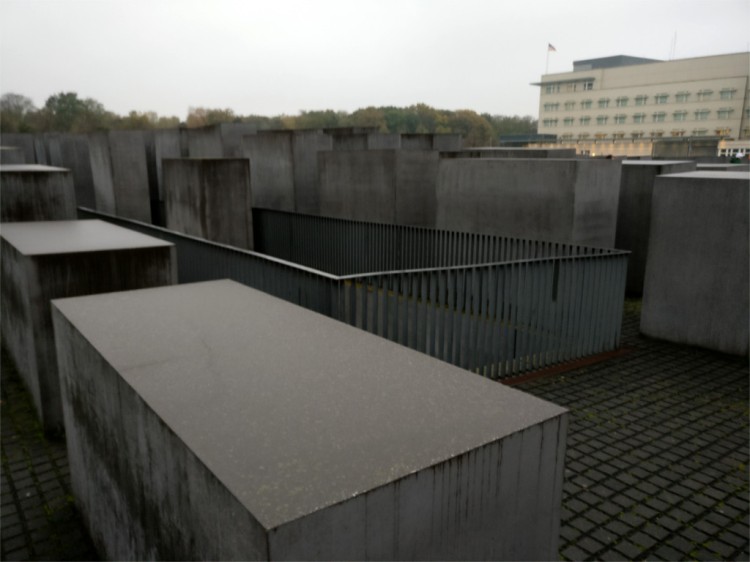 The coffins rise higher around you as you progress into the memorial. The ground undulates under you. Walking through these narrow paths between the dark columns, The Family and I had similar thoughts which we shared later. It is a memorial to political murder, and we both felt that it worked better since the six million dead had not been named here. That was the opinion also of the designer, Peter Eisenmann. An article in The New Yorker grants the complexity of the emotions raised by walking through the stelae. However, it differs from Eisenmann in the idea of not integrating the specific murders with the memorial. It asks the pertinent question, how do you understand 6 million murders while also keeping in mind the individuals who died?

The article in Der Spiegel says how the underground information center “…realized against Eisenman’s will, [will] make the memorial into a memorial. Even for those who doubt the symbolic value of the concrete blocks above, the confrontation with stories of deportation and annihilation will not fail to have an effect. It’s like a punch line of history that the worst crime in German history will be remembered underground — just a stone’s throw away from Hitler’s bunker.” True enough. But we had no stomach to walk through the flattened site of the murderer’s bunker after this.

Walking through the memorial I wondered whether there will be any ever for the two million Bengalis murdered through deliberate starvation when the imperial British government withdrew stores of rice from Bengal during the same war in order to prevent food from falling into the hands of the advancing Japanese army. We know today that the orders to do this came directly from Winston Churchill, who acted against the recorded advice about deaths that would result. Offers of landing food from the USA and Australia were refused. The refusal of all successive British governments to own up to these murders till today stands in stark contrast to this monument in the center of Berlin.

I don’t hold with apologies. The past is past, once the murderers are dead. If justice is to be done, the murderers have to be tried in their lifetimes. But acknowledgements, even if late, help everyone to see the clay which is dressed up with marble.