A decade back Mumbai was full of butterflies. You could see the bright grass-yellows fluttering in and out of traffic wherever there was an island with some greenery. If you stopped near one at a traffic light, you could see the fluttery flight of a Psyche or the almost invisible motion of small grass-blues. The potted plants in our balcony would be visited regularly by a host of larger butterflies, and on a Saturday afternoon I would take my camera and go for a half hour walk in the garden to take photos of a variety of these delightful animals. Then with the rise of mosquito-borne diseases, everyone decided to pump huge amounts of insecticides into our cities, and the butterflies suddenly vanished. The fluency which I had picked up in identifying butterflies also faded away.

Now, when I see butterflies during a walk in a forest, I feel like I can barely remember a few words of a language which I once knew well. The lemon pansy (Junonia lemonias)in the featured photo brought back a quick memory. I realized that when you have forgotten names, you see fewer butterflies. During our trip to the jungles around Thattekad I tried to train my eyes again to spot Lepidoptera, and I did manage to catch a glimpse of many Nymphalids (brush foots), Lycaenids (blues), Pierids (yellows), and Papilionids (swallowtails), from the little grass-blues to a fleeting glimpse of the yellow-and-black Southern Birdwing, India’s largest butterfly.

Butterflies are an undemanding pastime. You don’t have to wake up at unearthly hours to see them. They become active in the middle of the morning. The six-lineblue (Nacaduba kurava)that you see in the photo above is a typical low-level butterfly. The upper surface of its wing is a shimmery greyish blue. It hovers usually in bushes and undergrowth at the level of your knees, but comes to frequent stops to perch on a sunny leaf. If it settles on a chest-high leaf, grab the chance to take a photo. It will usually wait for you to take several shots. 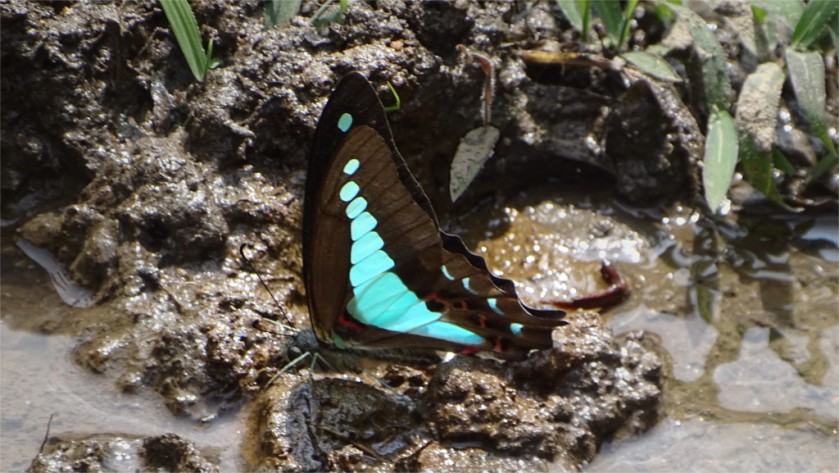 The common bluebottle (Graphium sarpedon), like most larger butterflies, inhabits a higher world in the forest, often flying at a level above my head. It is harder to photograph, since it perches for a very short time. I managed to take the photo that you can see above because around noon it decided that it had had enough sugars, and needed some of the minerals that it can only suck up from wet mud. Such mud-puddling butterflies give you a great opportunity to take photos. 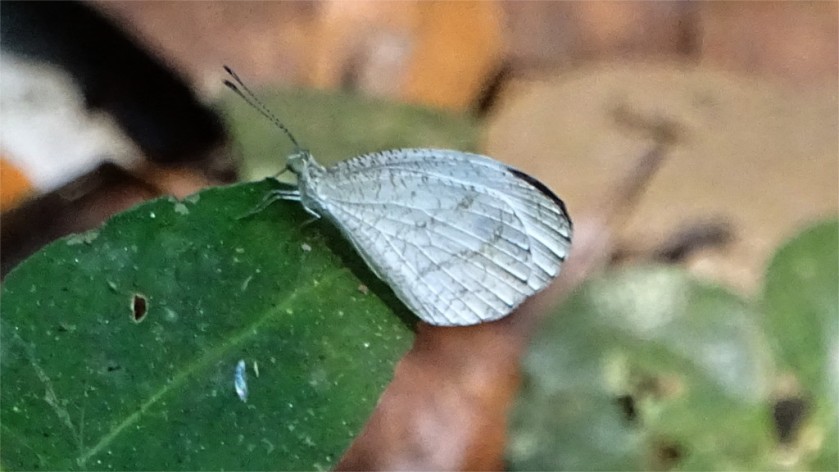 The butterfly which you see above is the Psyche (Leptosia nina). It is so common and widespread that think of it as the sparrow of the butterfly world. You can see its weak and fluttery flight everywhere there is some grass or some low bushes or herbs. I noticed this butterfly as far afield as in the Andamans and Myanmar, and it spreads well beyond that to the east. Like the lineblue, this is another small butterfly which flutters among vegetation below your waist. 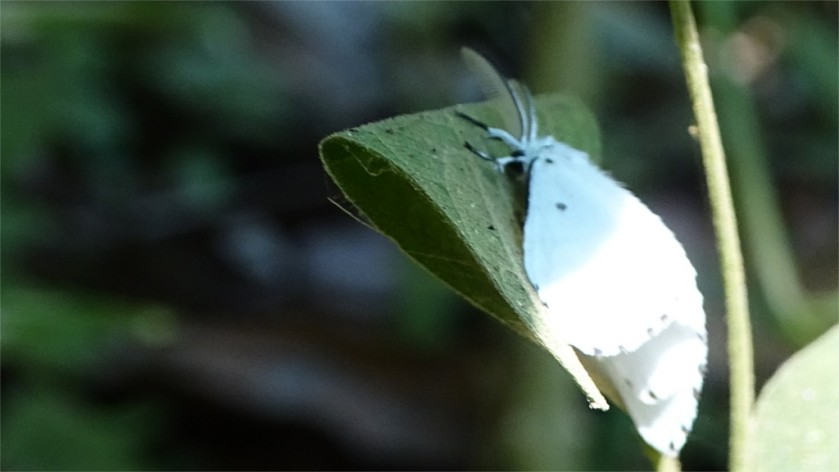 There are very few experts on moths. These are vast families of Lepidoptera which defeat an amateur. The relatively smaller number of butterflies are easier for amateurs to recognize because they are well-differentiated by wing colours and patterns. Moths are often drab, well-hidden, and requires finicky attention to differentiate from each other. I took this photo of a day-flying moth perched on a leaf. You can tell that it is a moth and not a butterfly by its antennae. All butterflies have the thin antennae with a club-head at the end which you can see in the other photos. Moths have a wide variety of antennae: the extremely feathery antenna of this one probably means that it is male. Some day I must make a trip with an expert on moths.