I first saw the Malabar giant squirrel three years ago in Valparai, napping in the upper branches of a tree late in the morning. If you look up descriptions of this squirrel you’ll find that they eat in the morning and evening and sleep the rest of the time. When I saw one again, early morning in Thattekad, it was very active in the upper branches of a tree. It scurried along, eating flowers and berries. Like all squirrels, it is quite dextrous with its front paws. I saw it grasp distant twigs and bend them to its mouth. It jumped from one tree to another, a couple of meters away, and I followed it. It scurried between the middle and top of the canopy, offering many opportunities for photographs. It seldom comes down to the ground, so most photos you will see of this squirrel have trees or sky in the background. By hoarding fruits and nuts, the giant squirrel disperses seeds widely. It seems that they may have had important influence in the evolution of some trees. 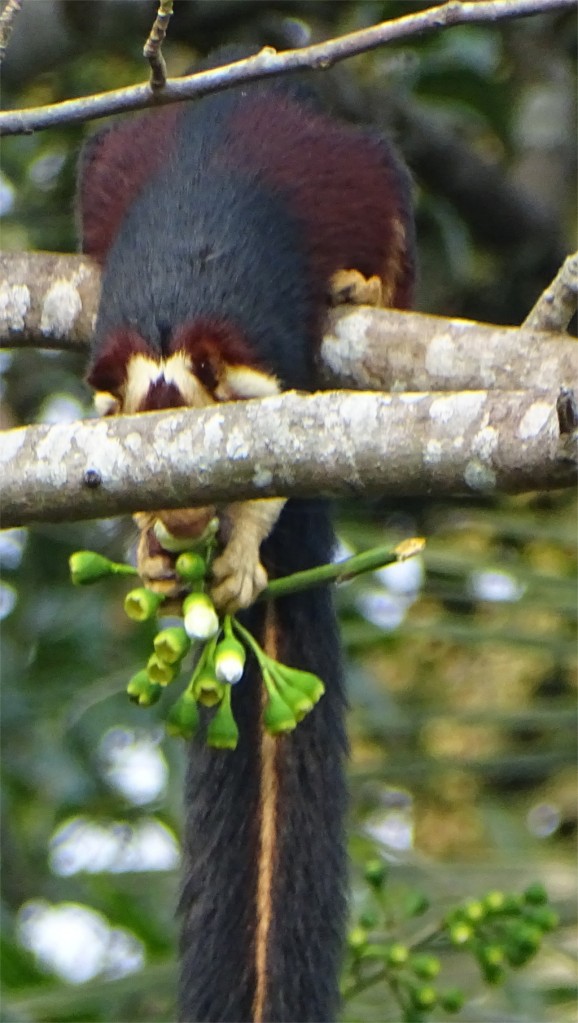 The lovely beige, tan and black colour of the coat are characteristic of the southern population of these squirrels. The beige stripe down the tail, spreading into a beige patch at the end of the tail marks out the subspecies Ratufa indica indica. In the area around Thattekad there is an overlap of the ranges of the R. indica indica and the Ratufa indica maxima, of which you see a photo below. Two or three other subspecies are named, and there is some talk, on and off, about elevating them to species. Even before this debate can conclude, one of the subspecies, R. indica dealbata has become extinct. In its original habitat of Gujarat, the forests have given way to plantations. Local extinctions have also been documented in parts of Karnataka, So, although IUCN has reclassified the giant squirrel from “near threatened” into “least concern”, there are many surveys in recent years which indicate that it should really be classified as “vulnerable”.

At the edge of the forest, I saw a squirrel eating coconuts. As forests are cleared, behaviour like this will bring it in conflict with humans. Currently the squirrel is protected by law, but the law is never very much of a deterrant in man-animal conflicts. Very little is currently known about Ratufa indica. A captive animal in a zoo was observed to live up to 20 years. It is guessed that they breed all through the year. Usually two, and rarely three, pups are seen together with the mother. Not much is known about their relationships to other squirrels. There is some evidence that Ratufa may have existed 30 or 40 million years ago. Perhaps the long summer of the squirrel has passed.