As you travel through the Sivaliks you see forests of pine slowly give way to oak as you climb higher into the Himalayas. At the Jalori pass, which is at an elevation of more than 3 Kilometers above sea level, you see mainly brown oaks towering above you. Then, once you are over the pass, a whole vista of the Himalayas open up: across the broken ranges of the forested middle ranges right up to the high Himalayas. The snow covered peaks that you see in the photo above were probably closer to us than Parvati Parvat (whose peak at an altitude of 6.6 Kilometers makes it the highest in the district of Kullu).

A closer zoom towards the peaks shows little more. The nearby forested ridges hide the higher mountains from view. The photo which you see above was taken from the Jalori Pass in Himachal Pradesh. At this height the forest around us was dominated by brown oak. As you climb higher, these are the last trees to die out. So the trees along the top of the ridge in the photo are probably brown oak. The distant snowy peaks are likely to be about 5 Kilometers above sea level.

Views of these peaks raise the travel-nerd in me. I see the next ridge, and I feel like exploring that. Then, of course, there will be the next ridge, and the next higher one, as you slowly climb. I have done that in the past, but this trip was a simple one, taking The Young Niece with us up to a height where she would still be comfortable. We looked at the meadows on the far ridges. The Family climbed up to a meadow on a near ridge while I walked with The Young Niece under the green trees of this middle earth, between the plains and the mountains.

The weather changes fast on the mountains. Storms raced across the hills during this week, bringing dust-storms to the plains. The next day, we walked to the edge of high cliffs and looked out again on the high Himalayas. The ice in the high valleys two Kilometers higher shone bright even in the diffused sunlight which filtered through the clouds. 50 million years ago, the Indian plate crashed into Asia, slithering into the magma below it, and pushing the Tibetan plateau into the sky. The Himalayas mark that catastrophic but slow collision. The Sivaliks, otherwise called the lower Himalayas, were made by crunching together the detritus left over from this collision, and were raised about 15 million years ago. 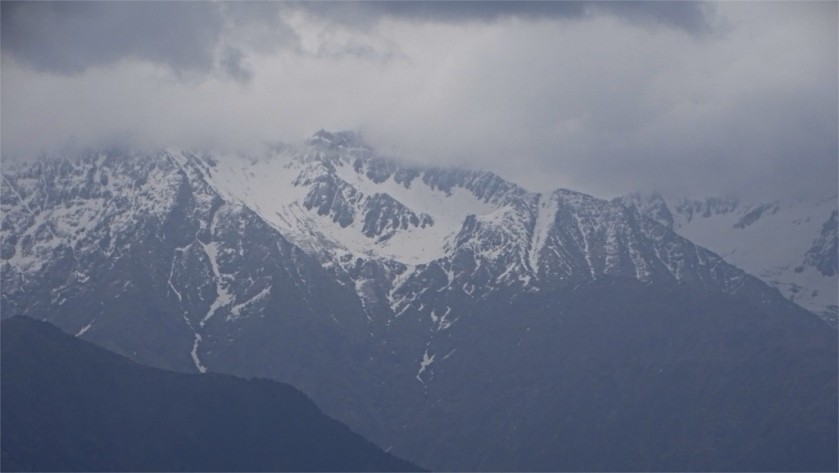 The Family never finished reading The Lord of the Rings, but it contains a verse, written in the Sindarin language which the old Don made up, which is appropriate for her. In English it goes “We still remember, we who dwell in this far land beneath the trees, the starlight …”. She cannot tear her eyes away from those distant peaks. We stood together, looking out at that harsh landscape of rock and ice. I was lost in matters of zoom and foreshortening, mulling the turbidity in the air, as she imagined herself walking up those rocks. 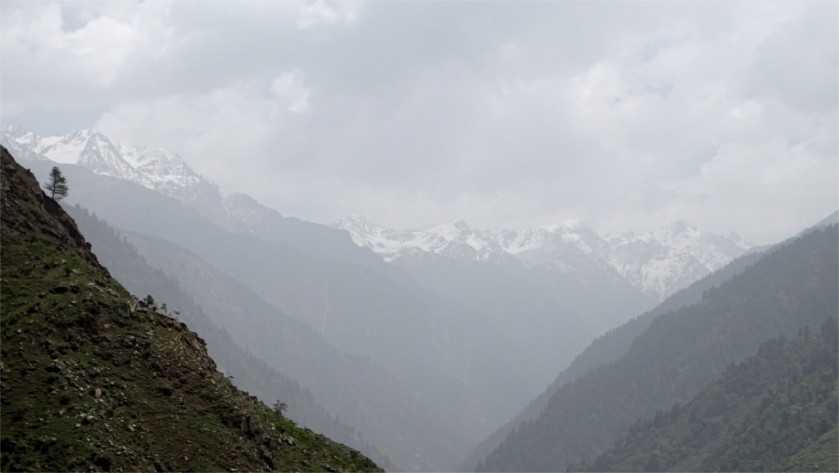 Our first view of the Himalayas on this trip was after an unproductive morning of bird watching. We were coming down from a drive up to Rohla. The Lotus had decided to walk down while the rest of us took our time piling into the car. We drove down to a turn in the road where we could look across the Great Himalayan National Park to the peaks where the Tirth river originates. The air was foul again, and the glacier could not be seen. The Lotus came down the mountain and all of us looked into the distance, knowing that it was a seven day walk to the mountains that we could see.

7 thoughts on “Beyond blue mountains”