As we walked along the road above the Falachan river valley, we came to a bend. There was a little temple here, a couple of houses, next to the road, and a few more above and below. The temple doubled as a bus stop. There was a little general store next to the temple. This was the center of life in this village. It was the best place to take a few photos, I thought. A couple of men were waiting for the bus, and obliged to be my subjects. You can see them above, layered up against the chill that would descend as soon as the sun disappeared behind the mountains, and with that wonderful Himachali cap. Unfortunately, neither of them had tucked a flower into the cap, a style that I saw several times in passing.

A few women sat in front of the store chatting. They agreed to let me take a photo. I saw both men and women running businesses in Kullu district of Himachal Pradesh. The two women on the right seemed to run this shop. They are also layered up against the cold. But while the men wear closed shoes, the women wear open sandals. I liked the clutter in the shop, food and clothes shared display space. 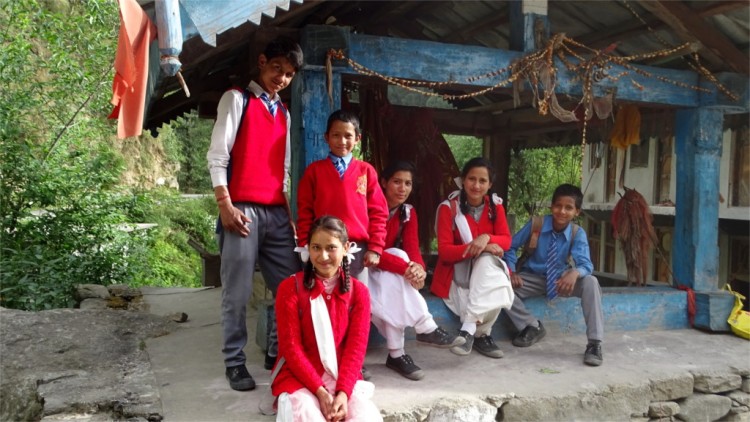 I walked back later and found these children strung around the slope chatting. I think they must have been discussing whether I would stop and take a photo (I must have become a famous photographer in the village that afternoon). As soon as I asked one of them whether I could take a photo, she broke into a big grin, called the others and said something like “Yes, he will.” The local dialect is not far from standard Hindi, and they switch back and forth easily, although they use only the dialect with each other. The whole bunch of them came together for this shot.