The Jami Masjid of Mandu is a grand building. First of all, it is grand in size. Apparently it encompasses 88 square meters. In the thick fog which enveloped it when we came to it, this makes it a mysterious place. At its height Mandu must have held a large population to require a mosque of this size. I’d forgotten that you must climb up stairs to enter since this stands on a high plinth. We did, our tickets were checked, and we entered. The fog was too thick for us to see the grand dome built by Hoshang Shah’s architects, who continued to labour after his death under Mahmud Khilji, until they completed the structure in 1454 CE. 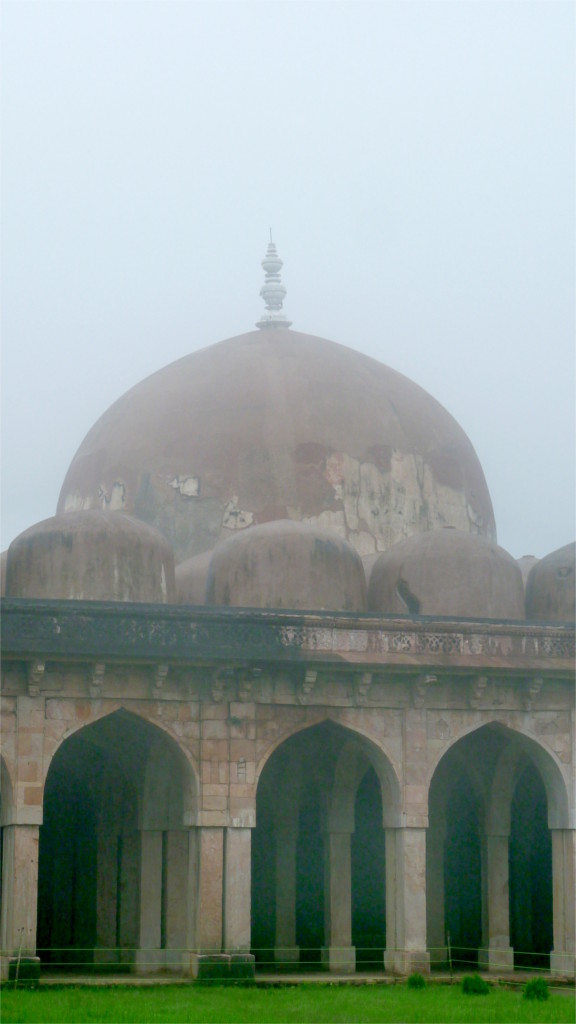 Above the entrance is an inscription which says that the mosque was modeled on the one in Damascus. the early 15th century CE was the era of Islamic internationalism, when the cultural world spread from Al-Andalus in the west all the way to kingdoms of what is today Indonesia. On our earlier visit the fog was thinner, and I got the photo looking west from near the entrance which you can see above. Standing below the dome I looked back at the entrance door and took the featured photo.

The fog converted this grandeur into a mysterious space. There were many other visitors, but they were lost to view, and their voices came to us muffled. As we walked through the southern gallery I took the photo which you see above. The pillars are completely plain; it is the sheer numbers which gives the place its grandeur.

The height of the ceiling decreases from the courtyard to the back wall. In the photo above, you can see the vaulted ceiling over the last row. This kind of groin vault is typical of Indo-Afghan architecture, and seems to be imported directly from earlier buildings in Delhi. The row of prayer niches (mihrab) on the back wall are just set into a curtain wall. The load of the ceiling and roof is taken entirely by the pillars. Another interesting thing that you can see in this photo is the minbar or pulpit. Contemporary travelers compared this decorative minbar favourably with the carved wooden pulpits of the Maghreb or the decorative stone pulpits of Egypt.

This hall was not made of bare undecorated stone when it was new. I looked a little more closely at the main mihrab. The remnant of white and blue tiles can still be seen. It was quite dark, and I could not see any inscriptions here, although they are said to be legible. Six centuries have not been kind to the mihrab. On the other hand, if you compare the wear on the flagstones, the prayer niche seems to be in reasonably good shape.

Another characteristic of Indo-Afghan architecture of Mandu are the stone screens on windows. In these two windows you can see that most of the panels use geometrical designs of octagons and eight-pointed stars. I liked the panels with eight-petaled flowers. Equally interesting are two of the other panels which mix squares of two sizes with eight-pointed stars. Unlike most of the other panels, this design can be repeated over and infinite sheet, and constitutes what would today be called a tiling of the plane. I wonder whether there were stone-masons trained in geometry, or whether the design and execution of these panels were separated functions.