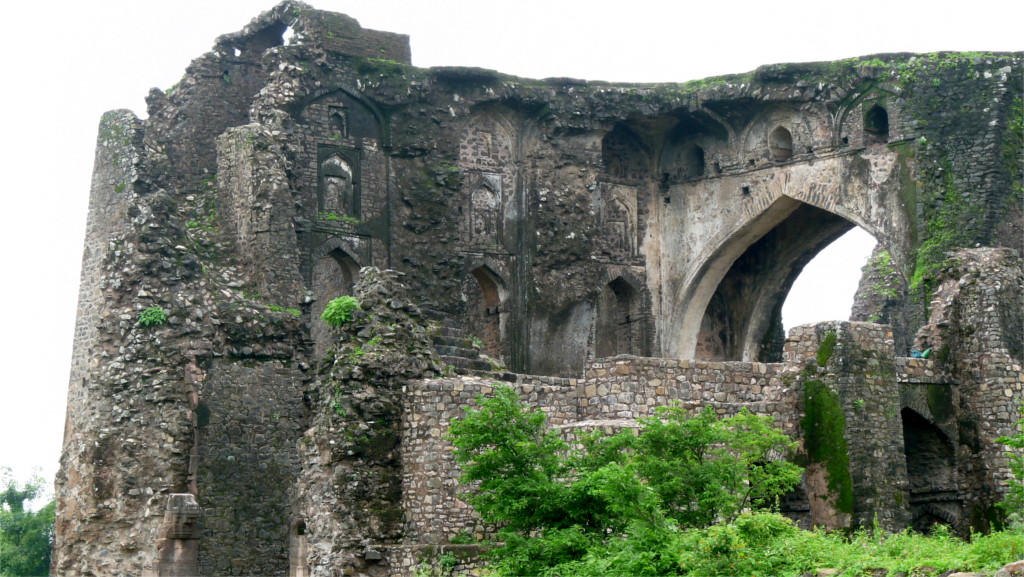 Years ago when we spent several days exploring Mandu we had the time to walk into smaller groups of buildings. One interesting group was the one near Sagar Talao. These are palaces and tombs of people who are not remembered. The structures in the royal enclosure are intact, but here walls have crumbled and roofs have fallen down. Like a beginning student of architecture, I strolled through these ruins marveling at how five centuries can destroy stone walls and flat roofs, while doing little damage to exposed arches until I discovered a little more to the story. 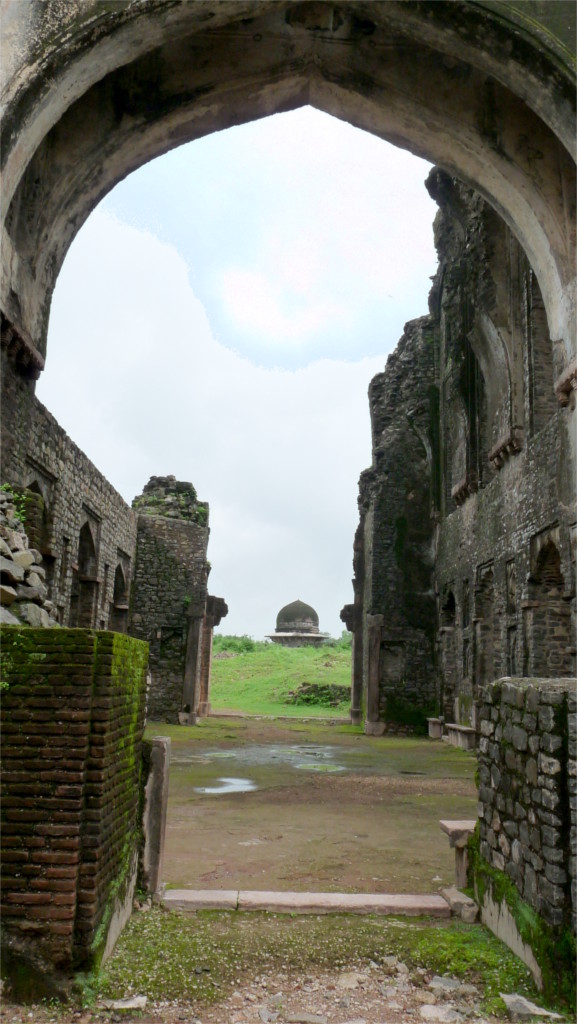 After a while I began to notice more details about these tumbled walls. Most obviously, you see the rubble masonry inside the walls. You can see the ill-fitting stones which would have been held together with mortar. I’d earlier noticed the incredibly thick walls of Hoshang Shah’s tomb. The marble that one sees there cannot have been cut in such thick slabs; probably those are thin sheets covering a rubble filling. In these lesser buildings, there seems to be little cut stone used (see the featured photo). So, once the mortar was weathered away, the walls could begin to crumble. In the foreground of the photo above you see the base of a pillar on the right made with ill-fitting stone. The base of the pillar on the left is made of tightly fitted bricks. This was a surprise. Who built with bricks? 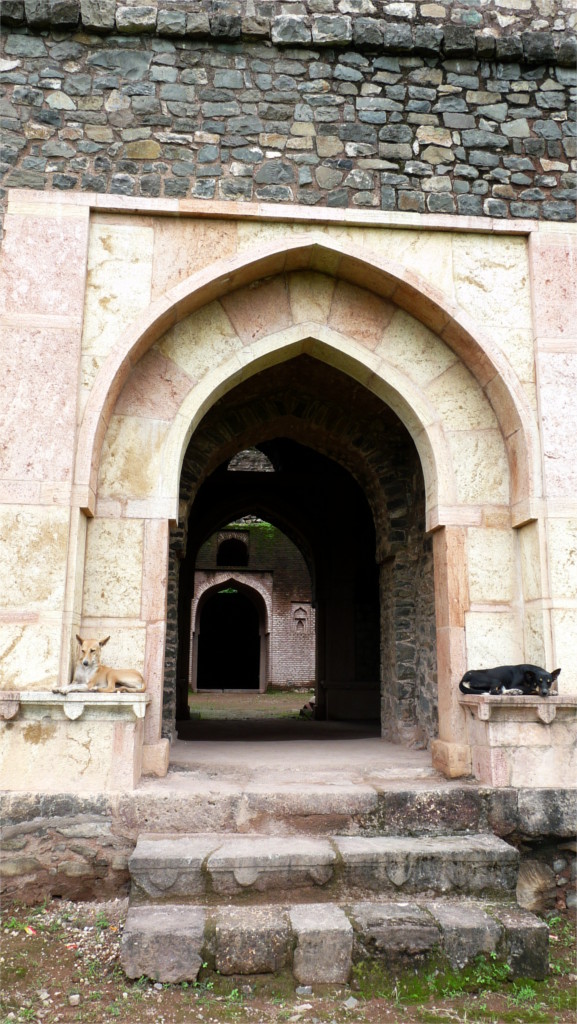 I liked the doorway which you can see in the photo above not just because of the two dogs guarding it. I thought that the sandstone was very well-chosen, with two different colours in the arch. I don’t know whether this comes from the 15th century CE, or a hundred years later. In these centuries the architecture of Delhi did marvelous things with coloured stones. What is interesting is that in its own smaller way, the provincial court of Mandu also tried this out. 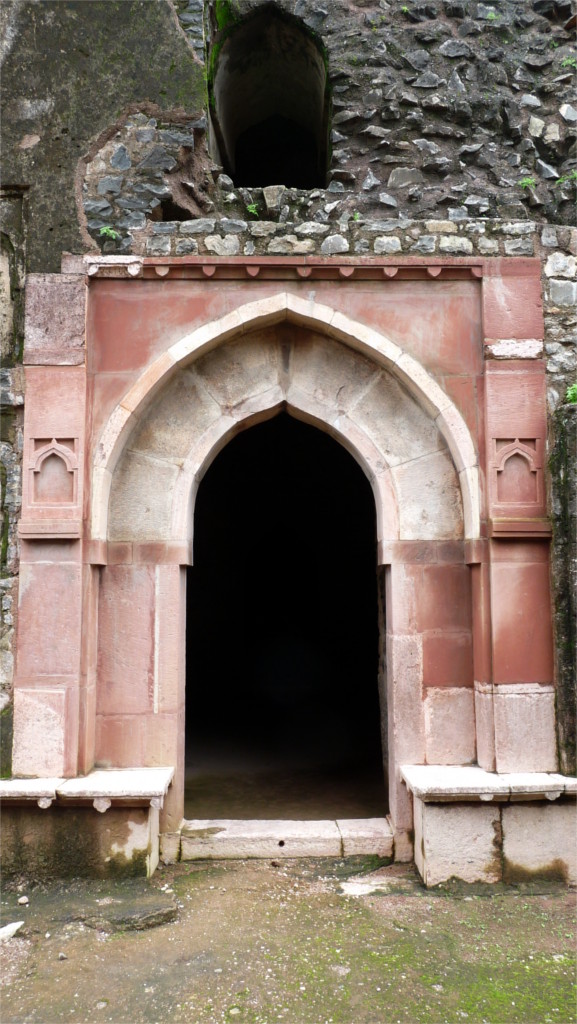 The arch in the photo above gives a complete picture of the method of construction. The doorway is beautifully constructed in carved sandstone. It is set into a rubble wall. You can see the mortar which binds the unshaped pieces of stone. The wall was faced with a thick layer of mortar. You can see parts of it still covering the rubble filling. Moss covers the facade. Any cracks in the mortar will lead to water seeping into it, and softening it until it falls away. These lesser nobles could not afford marble or sandstone to cover the whole wall. Inside one of the palaces (photo below) I saw niches made of plasterwork. The floors seemed to be made of mortar rather than the flagstones of the Jami Masjid or the royal buildings. 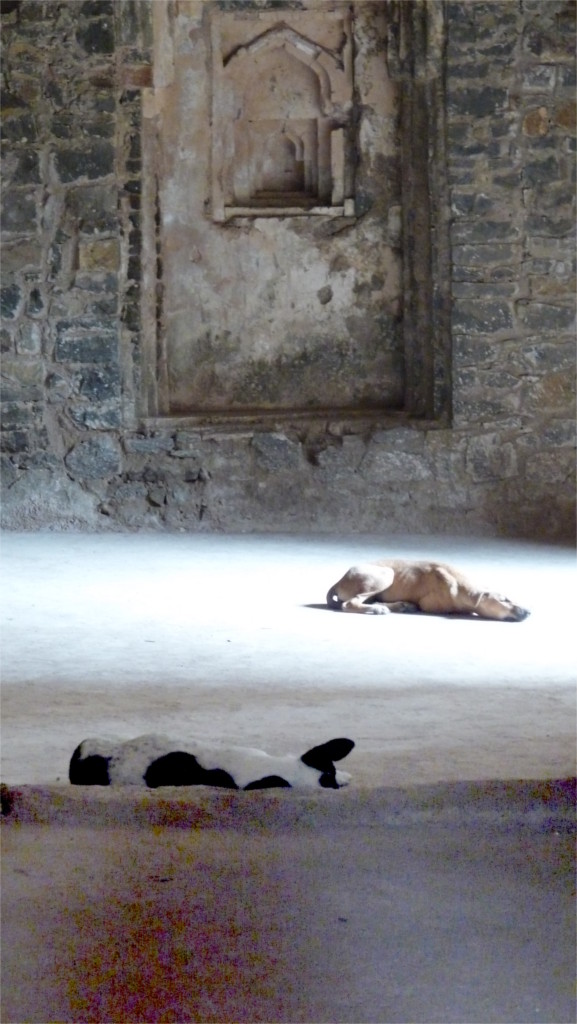 Even just outside the royal core of the citadel, the history of buildings and tombs are forgotten. Mandu was a center of literature and arts in the days of the Sultanate; its books are known, its histories documented not only by their own court, but also by travelers and neighbouring kingdoms. If you doubted that history is harsh and forgetful, a stroll through these huge ruins will convince you of your error very quickly. There are two structures in this group which have names that we know: Dai ka Mahal, and Dai ki Chhoti Behen ka Mahal. Both are tombs; the first of a royal wet nurse, the second of her sister. Would they be minor nobility or slaves? I never found out which royal was nursed, nor anything else about the persons who were memorialized in these tombs.