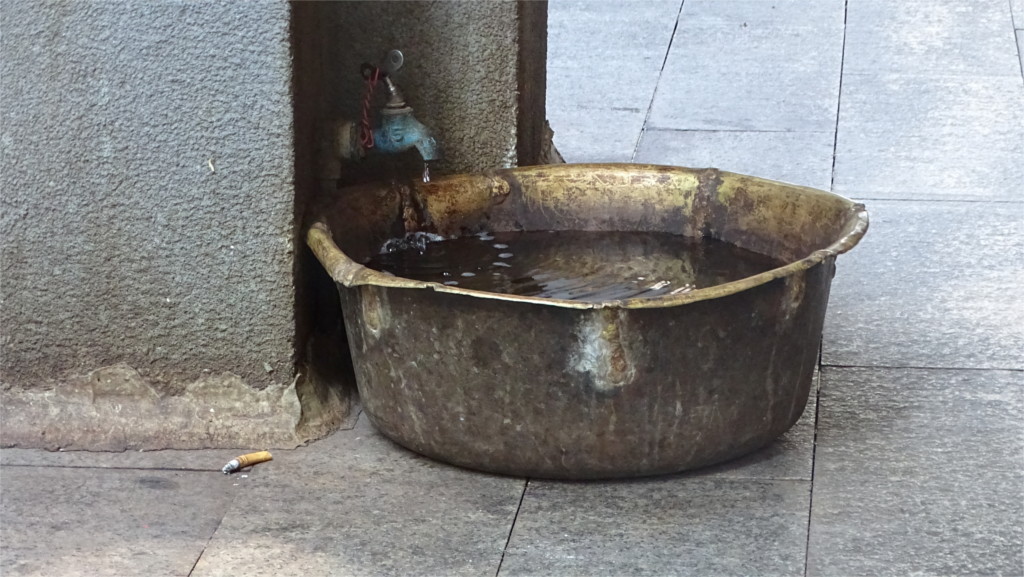 Tourist guide books don’t talk much about the Liwan district of Guangdong. A bland entry in Lonely Planet pointed us towards Enning Road, with the Bahe Opera’s guild hall. When we go there late in the morning we were totally flabbergasted by the gentle charm of the place. This was not what we had expected at all. This was a superlatively relaxed neighbourhood, where time seems to have halted in the 1930s. We were so charmed that we kept going back here.

Street signs pointed out the one thing that we knew about this area. The Family asked “Have you heard of Litchi bay?” I hadn’t yet. But looking for it gave me an entry into the literature on this area. A century ago this was the western end of the city, so the area was called Xiguan (western customs gate). The Lizhi bay was a maze of water channels which permeated the area and connected to the Pearl river (Zhujiang) immediately to the west. It was home to the Bahe guild of the Cantonese opera, and it was said that you could always hear music in Xiguan. We didn’t, but then Cantonese opera has fallen on relatively bad days. 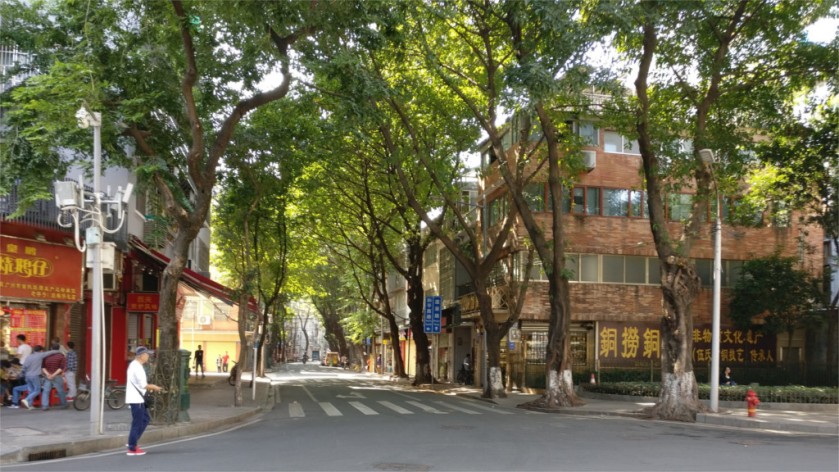 We walked along admiring the atmosphere we saw. The photo which you see above was one I took quite randomly just because I liked the sun filtering through the trees. We walked through arcaded roads and admired the roadside eateries where people were already sitting down for lunch. This reminded me of the Xintiandi area of Shanghai, where we had walked into back streets and tried to find lunch at one of the simple and crowded eateries there. 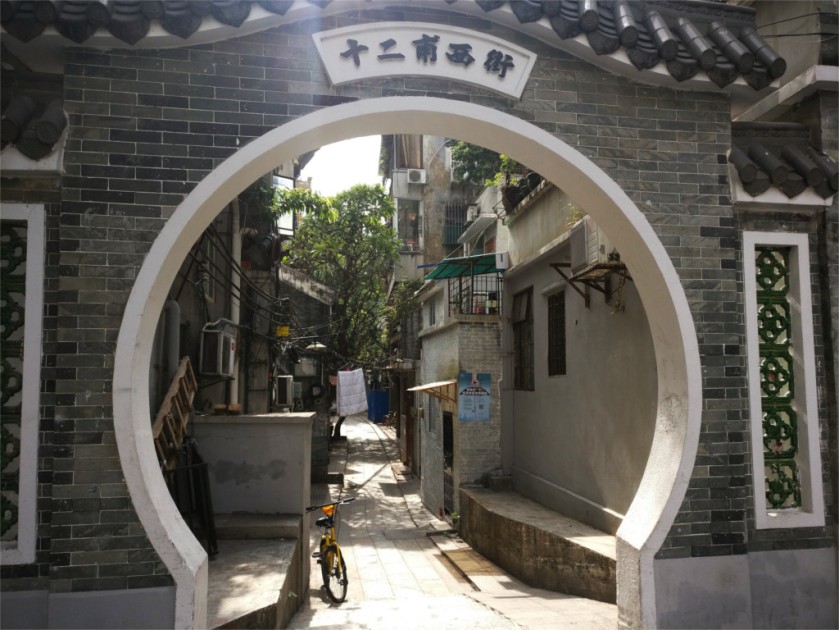 We passed a moon gate. I’d come to associate moon gates with gardens or other ceremonial entrances, but here it just served as an entrance to a block of houses. Was this moon-gated community special in some way? There was no way for us to find out, although I would have loved to hear the story behind it, if there is one. Should we go in, I wondered. The Bahe Guild Hall closed at noon, so I decided to hurry on.

It took us some time to find it. When we saw that the road signs no longer pointed to the Guild Hall, we realized we’d passed it. I asked someone, and they looked at the phone and directed us back down the road. The Family was certain that an interesting set of doors was where it was located. There was no sign giving the name of the place, but after asking a few more people, we found that it was indeed the place that The Family had noticed. Unfortunately they seemed to be closed for the day. The doors were barred, but not shut. There was no one around who could let us in. We decided to explore the area a bit more.

One of the specialties of Enning Road is brass. Near the Bahe Guild Hall we saw a brass worker tapping away at his wares. A basin was shoved under a leaky tap to catch the drips of water that inexpert plumbing had not stopped. Next to it was a bench. I sat down and observed the man at work, while The Family looked more closely at the things on display. This shop specialized in kitchen-ware, and about half of the things on display would be perfectly at home in an Indian kitchen. The other half is special to Cantonese food with its reliance on steaming and braising. 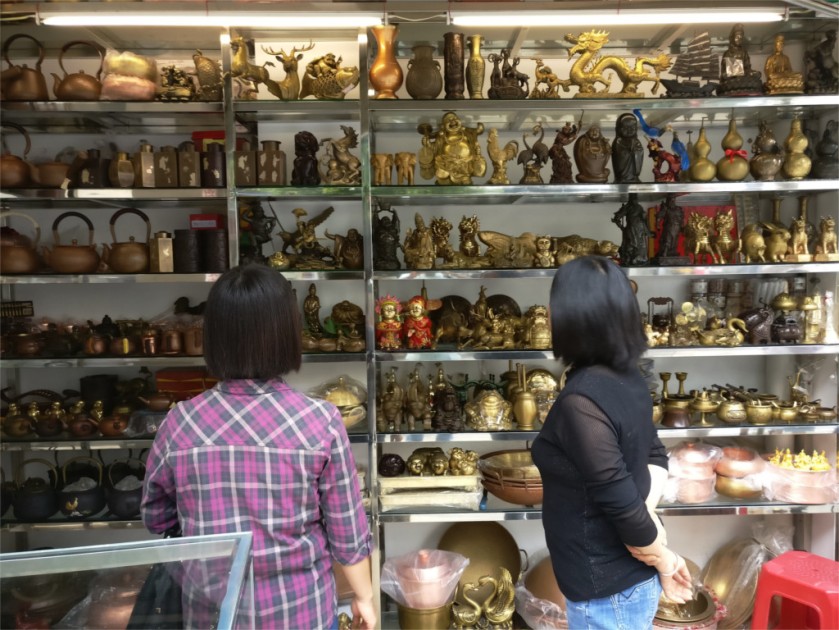 There were other shops which specialized in the little bronze and brass pieces which would be perfectly at home in a tourist’s suitcase. We stopped to admire the laughing Buddhas and the dragons, but stayed on to examine the rabbits and ducks. The pieces on display were clearly interesting enough for locals as well. Guangdong was the origin of the first Chinese diaspora, and there are many ethnic Chinese people who live in the US, but remain strongly rooted here. I wondered whether shops of this kind also cater to their tastes.

The most obvious architectural feature of Enning Lu is the arcaded street. Another is the very distinctive doors that I saw here, and nowhere else in Guangzhou. The patterns of the red, white, and green glass are consistent across the whole neighbourhood. I wonder whether one business made a killing supplying doors to all the houses on this road. When I saw a bicycle parked in front of such a door, I realized that there was a photo which captured the spirit of the place. China today is a place which embraces modernity, perhaps even defines it in some ways. At the same time it clings to certain aspects of the past. The combination of a modern bicycle and a century-old door seems to be a nice visual to say this.

We discovered a museum of Cantonese Opera a little further down the road, and then came to a little warren of lanes which contains a house where Bruce Lee may have grown up. We had not planned on spending time at any of these places. In our earlier visits to China we’d found that this is another country where you can have wonderful experiences just walking around, following your nose. So our planned schedule in China now allows for serendipity. We also admired other specialties of this street, such as furniture. The prices were comparable to those which we would pay in Mumbai, and the pieces looked nice. If we’d needed something then we would have tried to figure out shipping. But since we were not in need of furniture, we could just admire the pieces. 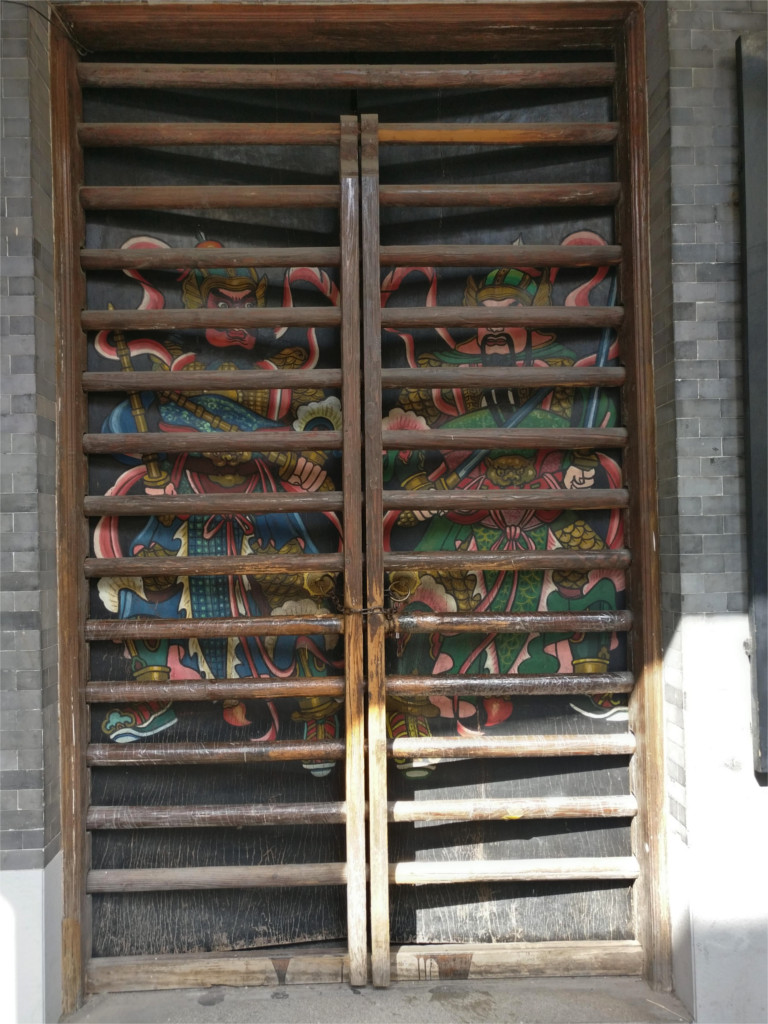 Eventually, when we walked back down the road towards the nearest Metro, we passed the Bahe Guild Hall again. This time the doors were definitely shut. We admired the two layers of safety: the scary guardians at the back, and the more mundane sliding bars across the front, secured with a single chain and lock.

13 thoughts on “The discrete charm of Enning Road”