There’s the standard Bruce Lee related lore which everyone knows. He was American by birth, lived mainly in Hing Kong, and was the star of four full length movies made in the last four years before his death at the age of 33 of cerebral edema. There is a long page on him in Wikipedia which I read after I realized that his father, Hoi-Chuen Lee, was a famous star of Cantonese opera, and lived for a while in the Yongqing Fang complex on Enning Road in Guangzhou. The stories that go along with the recent renovation of this complex are that this was Bruce Lee’s ancestral home (false, because his paternal grandfather’s house is in Foshan town in Guangdong province, close to Guangzhou) or that young Bruce grew up in this house.

This is not impossible, although I couldn’t find independent documentation. Bruce Lee was born in San Francisco in 1940 while his famous father toured the US in Cantonese opera shows in the Chinatowns of that country. At the end of 1939 Guangzhou came under Japanese occupation, and his parents took him back to Hong Kong when he was three months old, and just before Hong Kong came under Japanese occupation for almost four years. Immediately after the end of the war, Hoi-Chuen Lee resumed his acting career, and could have spent brief periods in Guangdong with his wife and son. 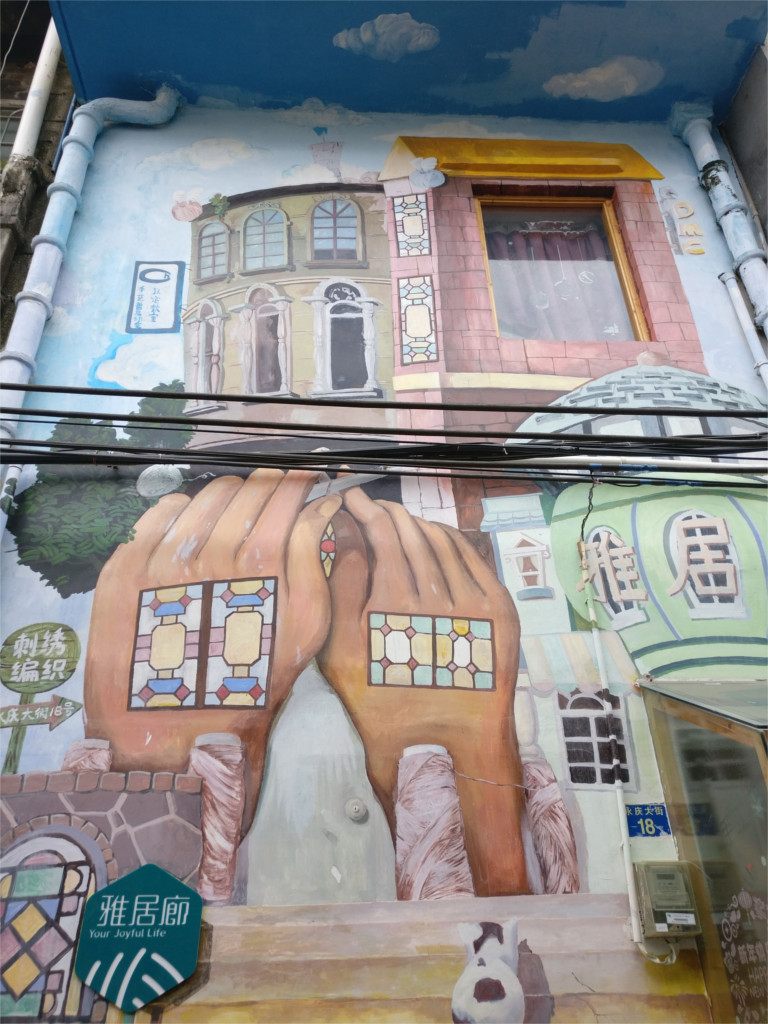 The Yongqing Fang complex has turned into a mixed use neighbourhood which allowed me to see the Xiguan style of housing up close. This is the kind of development that has allowed Shanghai to retain its old Shikumen style architecture in the areas called Xintiandi and Tianzifeng. Like those areas, this place is filling up with trendy little cafes and restaurants, and art galleries, cheek by jowl with people living in some of the houses. The mural that you see in this photo captures the unique style of doors that I saw on Enning road (the panels on the back of the hands). This mural was a very popular selfie point.

We made a beeline for Bruce Lee’s father’s house. From some photos I’d seen in a travel guide, I’d expected a small museum dedicated to Bruce Lee inside. Surprisingly, all that had been stripped away. The house was bare, but with enormously decorative internal doors. Since everything but the brick and woodwork was stripped away, the bare house was a great place to view Xiguan style houses. I walked up the wooden stairs which you see in one of the photos in the slideshow above. The Family refused to make this climb. Upstairs were a few rooms and an open terrace which looked out on the street. It wouldn’t be a small house for a family of three.

The place was full of slightly disappointed fans of Bruce Lee. You could tell who the fans were if you stood by a painting of the star on the rolling shutters of a neighbouring building. All the fans would come and pose here. I indulged in a little more of ambush photography here. My favourite fan was the lady who had her husband pose very reluctantly in front of this portrait. I discovered that The Family was a Bruce Lee fan when I was co-opted to do a shoot of her in Kung Fu poses in front of this painting. I wonder whether someone ambushed our photo session.

I liked the redevelopment because I’m a tourist, but it surely must feel like a bit of an imposition to the people who still live here. I wouldn’t have wandered through these alleyways unless if they hadn’t been restructured to draw in people like me. I understand that Xiguan, and Enning Road, were desirable addresses until the Japanese invasion, but fell into bad times after that. The opening of the museum of Cantonese opera and the renovation of this Yongqing Fang complex are part of Guangzhou’s efforts to rejuvenate the area. This will of course undermine the quiet charm of this currently low-key part of town, but eventually it may be a good thing for Guangzhou.

I was not surprised to find a cafe like this in the complex. I’d expected very high quality espresso, and I was not disappointed. China has reached the stage where a young person can dedicate several years of his (or her) life on doing a little thing very well and make a decent living by it. This young barista here does coffee and cakes well. We sat here and discovered that the morning had gone by, and we were running late for lunch again. Eventually we found a Japanese restaurant in the complex and sat down for a quick lunch.

But before that I could indulge in my new passion for ambush photography. It is, of course, a form of street photography, but differs from the usual runs of street photos in that you ambush a group of people who are posing for another camera. It could be a professional movie or fashion shoot, or a group of friends taking each others’ photos, or a photographer and her model, or a person taking a selfie. Ambush means that your camera captures what was meant for another camera. This photo came out well, and when the group realized that I’d taken their photo there were the usual questions about which country we came from. We left after sharing smiles.