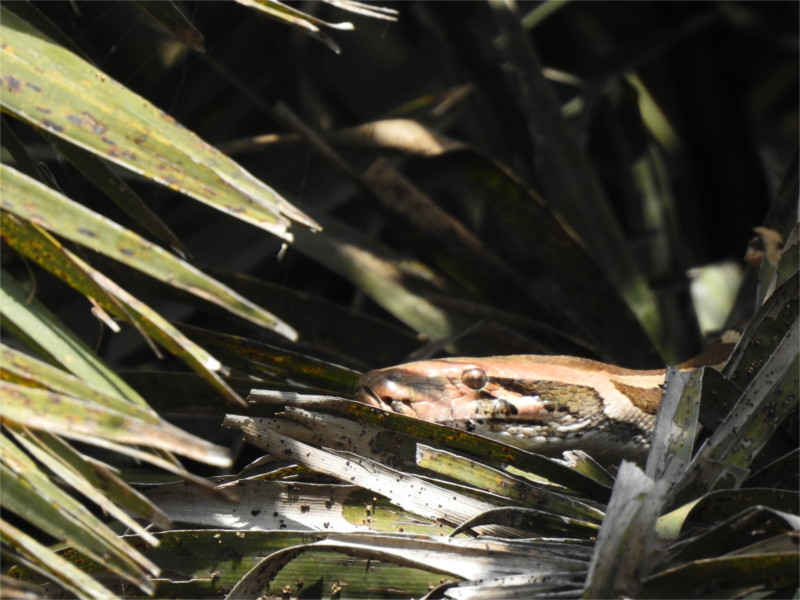 No, definitely not Monty. The large snakes that I saw in Keoladeo National Park were the non-venomous Indian Rock Python (Python molurus). There was quite a population of them around. I was most surprised by the one up in a tree. Had it gone up there to look for nesting birds? Apparently they’ll eat any animal, but have a slight preference for mammals. Perhaps because you can eat mammals without having to climb trees or fly. They are practically comatose after a meal. We saw one at the side of a road. It looked dead, but after some time it moved slightly. Only then I realized that there was a bulge a little way below its jaws, meaning it had just eaten.

Elsewhere I saw one slowly emerge from a burrow (they are known to take over abandoned burrows of other animals) and crawl away towards a thicket. It moved very slowly, and with only minor undulations. This was a large animal, easily half again as tall as me, so likely to be an adult. They lack eardrums, so we could talk as much as we wanted without disturbing the animal. However, they feel vibrations through the ground, and therefore are sensitive to movements. The fact that this one crawled away from us could mean that it had detected our footsteps or impatient shuffling. They are quite shy, and will try to flee if approached.

Interestingly, someone has studied their social behaviour. it was found that the males have a simple dominance hierarchy with different individuals strictly ranked. Social hierarchies are used by many animals to defend territory or mating rights, often without actually fighting. Some time ago I’d seen two male nilgai establish a hierarchy without any contact. Apparently pythons are less adept at such conflict avoidance, and have to fight to establish dominance. Given how few there are, it is something that I don’t think I’ll ever see. 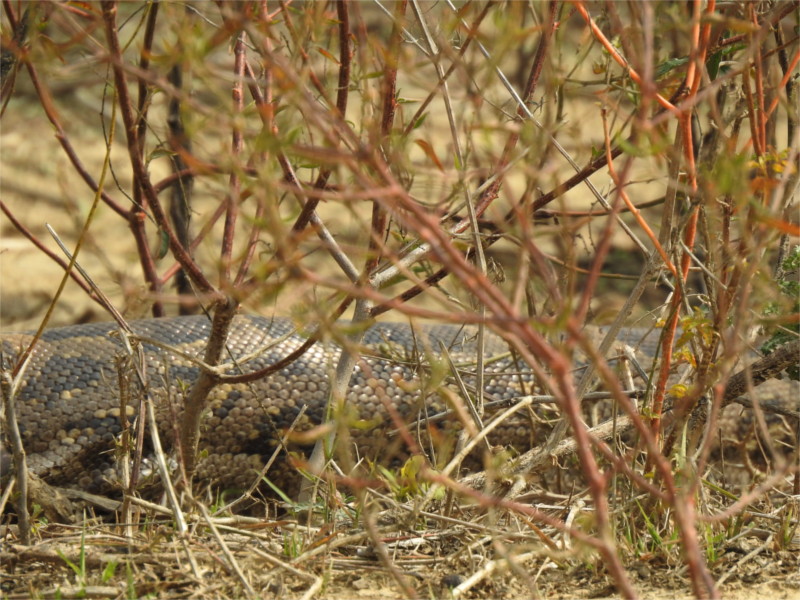 Pythons branched away from other snakes about a 150 million years ago, but share with many other snakes the ability to sense infrared using something called a pit organ (you can see it in the two photos of python heads above). What sets the rock python apart from its other cold-blooded cousins is that the female can control its body temperature when incubating eggs. A classic study found that it does so by rhythmic contraction of muscles to generate heat. These fascinating creatures are now classed as near threatened by IUCN, which means that it is slowly being squeezed out of existence by our need for space. How many more human generations will see them before they go the way of the dodo?