When I saw video clips of flames leaping from the caved-in roof of Notre Dame de Paris, I thought of all the times it has touched my life. But when I looked at my folder of photos, I could find only two of the cathedral. In others, its 19th century spire is in the background; I must have more photos from the time I used film. This reflects accurately the role Notre-Dame played in my view of Paris. It was my entry point to the city, but it quickly receded into the background, used only as a landmark.

This supposition that the Greek temple is an imitation in stone of a wooden hut is of the same order as that which refers the architecture of our Gothic churches to the forest avenues of Gaul and Germany. Both are fictions well adapted to amuse the fancy of dreamers…
“Lectures on Architecture”, Eugene Viollet-le-Duc

I remember one summer when Victor Hugo’s book by this name was my constant companion on the Metro, to and from work. After work I would walk through the streets of Paris, trying to follow the routes taken by various characters. It wasn’t easy; the cathedral was built in the 12th and 13th centuries CE, and St. Germain, now in the 6th district, was then outside the city walls. The intervening years had changed the city as much as the cathedral. When I realized this I started looking at the city in terms of its history, so that the addition of a glass pyramid to the Louvre seemed like a continuity. 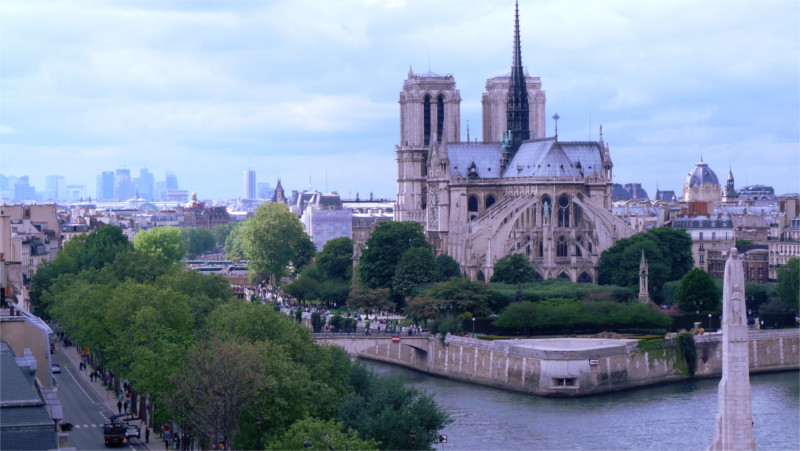 When I first visited Paris in the 1980s, I would sometimes meet up with friends in the pleasant square in front of the cathedral, a short walk from the pubs and restaurants of Odeon, St. Michele, or Jussieu. The last time I stood there and took photos was in the 1990s when The Family and I first went to Paris together. The two medieval bell towers and the rose window (one of the few remaining works of art from the 13th century) were as wonderful as ever, but the press of tourists had increased. After that we decided to leave the front to new tourists, and walked around the back.

My first illegal walk was at 20, between the towers of Notre Dame.
Philippe Petit, high-wire acrobat, referring to his walk of 1971

We’d spent a pleasant afternoon one May sitting on the lawns behind it, eating sweet and juicy cherries from a bag, and admiring the superb flying buttresses. The Family was as enchanted by the gargoyles as I’d been a decade before. Our admiration was not reduced by the discovery that they were 19th century additions, like the spire. The architect of this renovation was Viollet-le-Duc, who turned many things into his fairy-tale version of medieval.

The bridge behind Notre-Dame, Pont de Sully, is named after Bishop Maurice de Sully who started building this iconic structure. It became our favourite place to stand in evenings, holding cones of ice cream from Berthillon, as we admired what Sully’s cathedral had become more than 800 years later. Ironically, the view from this bridge was dominated by the spire and roof added by Viollet-le-Duc. These are the parts which collapsed in yesterday’s fire. Not having heard anything to the contrary, I assume that the rose windows which date from the 13th century are intact.