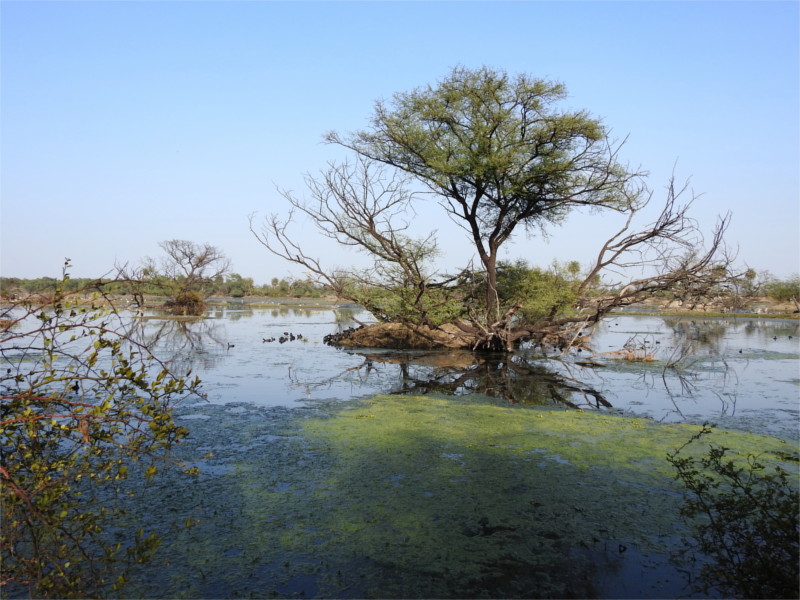 On late winter afternoons Keoladeo National Park in Bharatpur looks beautiful and calm. It is a lovely time to be outside, watching shadows lengthen slowly over still waters. The Family scanned the surroundings; she’s very good at spotting hidden birds. I am visually lazier, looking at open spaces, attention on obvious things like that huge tree jutting out of a little islet in the pond. I wondered whether the tree created the islet or it sprouted on an already existing mound. The green moss on the blue water looked nice, so I raised my camera to take a photo.

One edge of the island was crowded with Common Coot (Fulica atra), which are highly visible winter migrants because of their distinctive white bills. You can see them in flocks like this, or paddling singly or in pairs in ponds across India in this season. It seems that they are extremely territorial and aggressive in their breeding range in the northern latitudes, so I find it a puzzle that they flock together like this while they winter in India. The answer, it seems, is in the cost of vigilance. Watching out for predators takes time away from other activities. Many eyes watching out would improve the ability of flocks to feed better, even with more competition for food due to flocking at the same place. The island also had other birds; you can see a Watercock (Gallicrex cinerea) near the edge of the frame.

At this time of the afternoon the birds are quite active, probably getting a large meal before settling in for the night. I tried to get extreme close ups, but the level of activity was so high that the birds kept disappearing under water leaving only large splashes on the surface. I’ve often seen long leaves hanging from the bills of coots when they come up again. It seems that they feed on leaves and seeds more often than on invertebrates. When I found this I wondered whether they can be as bad as some more common herbivores, which can denude a landscape if their numbers increase. Very often, when you ask a question someone else has asked it before. So I could get an immediate answer: no. Good to know that this abundant and un-endangered bird is not the cause of the disappearance of other species. You can say that in this respect they are pleasantly inhuman.