One of the oddest things to see in Cappadocia are the underground cities. We visited a place called Derinkuyu. You walk down a set of stairs and suddenly you are in a maze of passages carved out of the volcanic ignimbrite. It is the caves of Cappadocia written large; large enough to hold about 20,000 people. The spaces are totally bare: not a single decoration or touch of ancient paint. Any signs on the walls and all the lights are all modern.

Very little is known about the origins of these cities. Some people point to passages by the Athenian historian Xenophon as the earliest known records of these places. That would date them at about 5th century BCE. They could be much older. Hittite origins have been speculated; that would push the origins back to about 5000 years ago. What we seem to know for certain, from contemporary records, is that during the centuries of Arab-Byzantine wars, the 7th to 10th centuries, these underground cities were used as refuges by the local population for short times. The lack of knowledge makes speculation easy; there are some who would like to believe that extra-terrestrials came to earth just to dig holes in the Anatolian plateau. Some of the ancient structures cannot stand by themselves, and had to be strengthened by later arches, as you can see in the photo above.

The roughness of the walls, the uneven supporting columns, the occasional falls show that the level of technology that was used to carve out a place like this was not terribly advanced. I looked up at a ventilation shaft and wondered whether it would bring the rain down. Sheer dedication, and several hundreds of years of chipping away at rocks, would have been responsible for a place to grow as extensive as this. What we seem to know is that the Greek-speaking inhabitants of Anatolia continued to use these caves until the population exchange of 1923. After that it was forgotten, and rediscovered only in 1961. 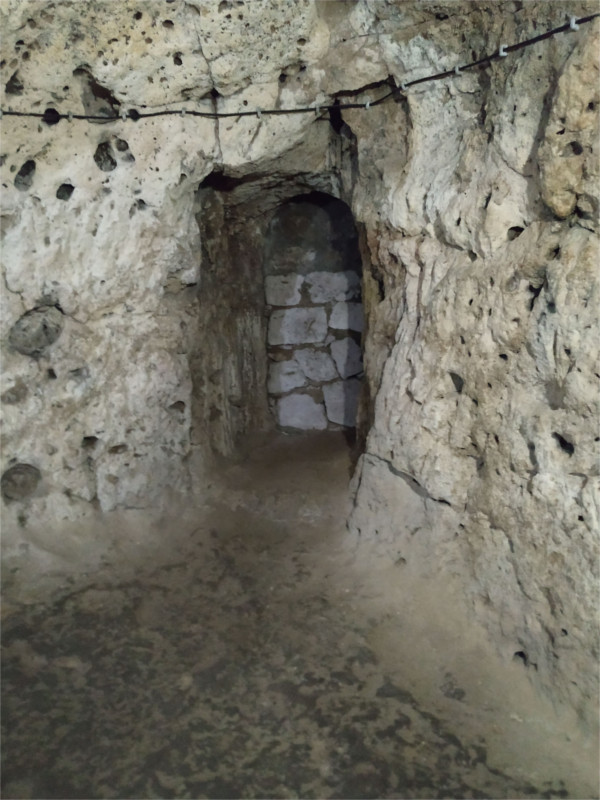 Anatolia is geologically active, and there have been many earthquakes recorded in history. However, the Cappadocia region is rather stable. In spite of that one could expect that underground excavations would occasionally collapse. I saw one side chamber walled off with a modern wall. Perhaps the area beyond that had become unstable. Most of the interesting things were at lower levels, but I was already developing a backache from stooping. The Family decided to go on down while I climbed back up to the sun.

After about an hour The Family came back up talking of having to walk bent down through long and low corridors as she went down to the eighth level. She’d seen niches carved into living spaces, beds, tables, and benches carved out of stone, little cubicles for livestock at the second level. There were no paintings or decorations visible, she said. I looked at one of thefew photo she had taken (above) and found it interesting that the steps are carved much more finely than the walls. In any case, the photo convinced me that I’d made the right decision in not going further: the corridors were too low.