If my trip to Turkey taught me anything, it was the single most visible difference between a Greek and a Roman amphitheater. Greek amphitheaters are built into slopes of mountains or hills, whereas the Romans built them as free-standing structures. The amphitheater in Miletus (featured photo) is therefore clearly built during Roman times. When you begin to explore the structure you realize that nothing that old is so simple. What we see today is the Roman era rebuilding of the theater, after later Byzantine works were removed by 19th century archaeologists. There is a little hill at the back into which the earliest Greek theater was built.

Theaters were largely used for watching games in Greek and Roman times, much like today. I thought for a moment that the relief sculpture near the entrance (photo above) showed gladiatorial fights. But when I looked closer it seems that they are more heroic than that. It is not unlikely that gladiatorial fights were staged here, but there were possibly more uses to the arena. 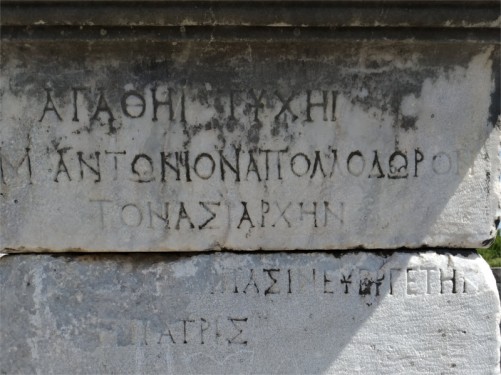 We saw scattered stones bearing sculpted decorations, and much writing in Greek. Even in the Roman era, the language of this region continued to be Greek. I suppose that this constant linguistic friction between the east and west of the empire was at the root of many problems, including the Great Schism of the later part of the millennium. We should really have taken some time to examine the graffiti on the seats in the theater, but I felt too lazy for that. While The Family climbed up the tiers of seats, I looked for a way into the structure. 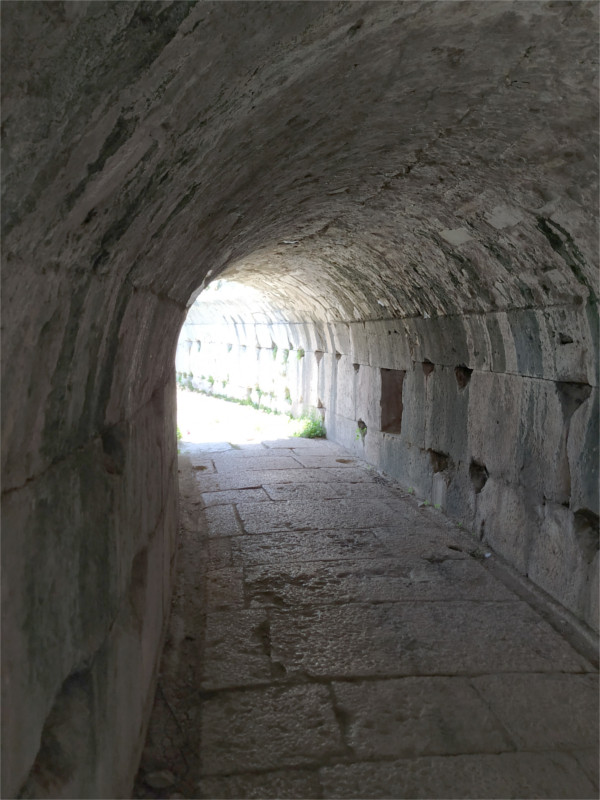 It wasn’t hard to find. The theater seated 15,000 people, so orderly flow of spectators must have been a design concern. I climbed into the corridors behind the seats and found them in a remarkable state of preservation. It was easy to walk right around the theater, climb up and down different levels. Eventually The Family abandoned her climb through the seats and joined me in the shaded corridors. The sun was warm, but it was quite pleasant inside the massive stone structure. This area is the delta of the ever-shifting Meander river (today called the Büyük Menderes). In the earliest times the seats of the theater faced the harbour of Miletus. 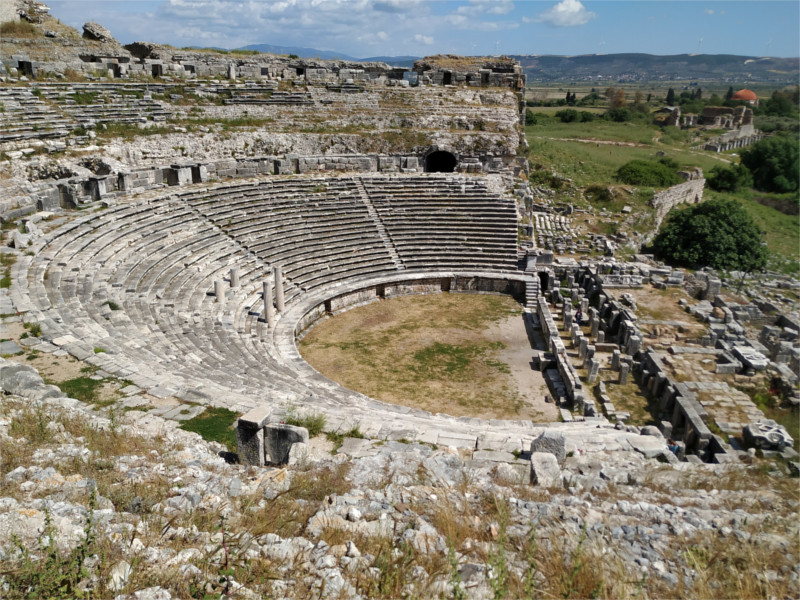 We eventually reached the top level of the theater and could look down at it. At the center of the immense semi-circle, four columns marked the place where the emperor would sit. One can also see the ruins of the Skene, the building behind the stage, very clearly from this vantage point. Hidden behind the far wall of seats is the remains of a Seljuk eta caravanserai which has been converted into a restaurant. We’d had a relaxed lunch there, and met up with a group of British birdwatchers who told us stories of seeing Dalmatian Pelicans beginning to nest nearby. The Family and I instantly marked this area down as a possible birding destination. 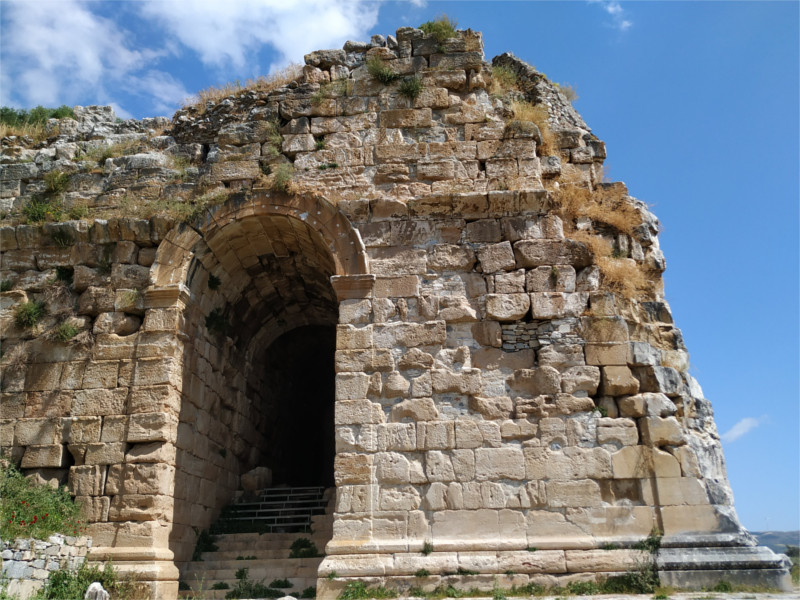 If you look at the featured photo again you will notice fortifications on top of the theater. We were now at a level where we could go out and look at them (photo above). This is a Byzantine era fortress raised during the times before the Turkish invasion. The walls of this fortress ran down to the stage, and were removed when the theater was restored. It is said that a military post was raised at this place earlier in 411 BCE by the Persian Satrap Tissaphernes after he conquered Miletus. 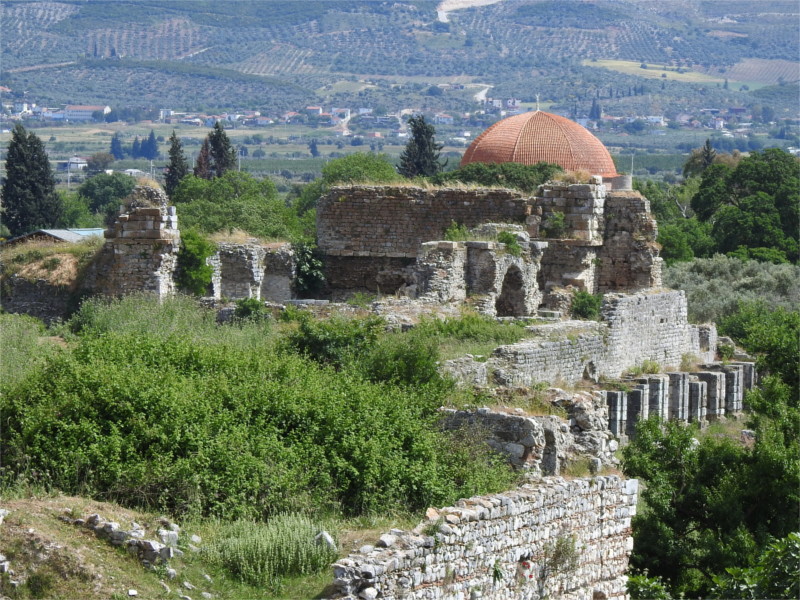 From the top one could also see Ilyas Bey’s mosque, erected in 1404 CE to celebrate the safe return of his wife after being captured by Timur’s army. The dome and the mosque seem to be in good repair, but the rest of the complex, the old Madrassa and the baths, are in ruins. The caravenserai buildings that we’d had our lunch in is also attributed to the same Ilyas Bey, emir of Mentese.

We found our way down through the tunnels used by spectators in the Roman times, and exited through the ruins of the Skene. The wildflowers of spring were everywhere and we stopped many times to take photos. In our times this part of the Aegean coast is beautiful in spring. The weather would have been warmer during the time of the Roman empire, and significantly cooler during the Greek period. I wonder what wildflowers could be seen in those days.