The drive from Miletus to Didyma is short. The distance is about 20 kilometers by today’s roads. We’d started from Kusadasi in the morning, driven through a gap between Mount Mykale (today’s Samsun Dağı) and Mount Thorax to Söke, turned along Mount Mykale to Priene, and then followed the highway across a flat land full of fields to Miletus. Two thousand and eight hundred years ago, this flat landscape between Priene and Miletus was a finger of the Aegean sea. Alluvial deposits from the Meander river (today’s Büyük Menderes) have filled in this sea over millennia, leaving the fingertip of Bafa Gölü as an isolated lake cut off from the Aegean. As a result what was once a peninsula with Miletus on the northern shore and Didyma on the southern, is now just a hilly landscape (featured photo) in the last leg of the drive from Söke to Didyma. How much more difficult would have been Alexander’s campaign against Miletus when he was camped in Priene!

The temple of Apollo in Didyma is ancient. There are writings from the 5th century BCE which describe this as a much older tradition. Equally old is a pilgrimage route between Miletus and this temple. Olivier Rayet discovered part of a paved route which he called the Sacred Way, and hypothesized the remainder of the pilgrimage. Theodor Wiegand later went so far as to identify specific features of the landscape with rituals which are mentioned in texts. Wiegand’s way lies closer to the hill called Akron than today’s road, but runs parallel to it after the lovely bay (photo above) along which modern day town of Mavişehir spreads. The local government has opened a hiking path following this century-old reconstruction. 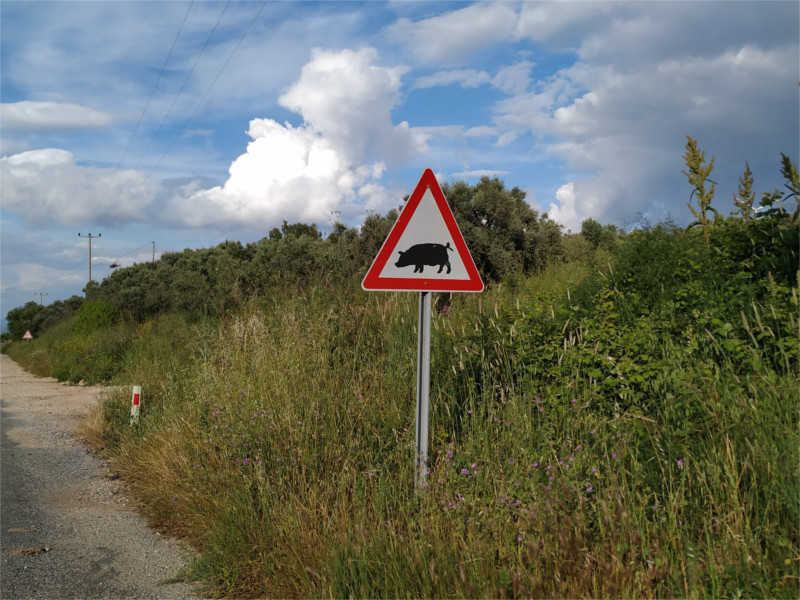 Modern day reconstructions have used computer models of changing landscapes and reconstructed likely paths based on the segments of road which have been uncovered, and reached drastically different conclusions. The main modern idea is that since the topography of the area changed appreciably over the centuries when the temple was in use, the sacred way was remade several times. In particular, there was never a part of the road which came as close to the coastline as today’s highway. This was partly because the coastline was always in flux, but also because an alternative stable route through a valley was available. Wiegand’s way is then as mythical as flying pigs. But then, why do drivers in this peninsula have to watch out for pigs?

3 thoughts on “The Sacred Way”