When we stood in the ruins of the “new” temple to Apollo in Didyma, I wondered how old the Oracle of Didyma was. I couldn’t find a clear answer. The “archaic temple” was built in the 8th century BCE, and the oracle is known to precede the appearance of Greeks in this area. Since there were settlements in this region from Neolithic times, and little written history comes down to us from before the Greeks, you can pick your favourite date out of about 10000 years. 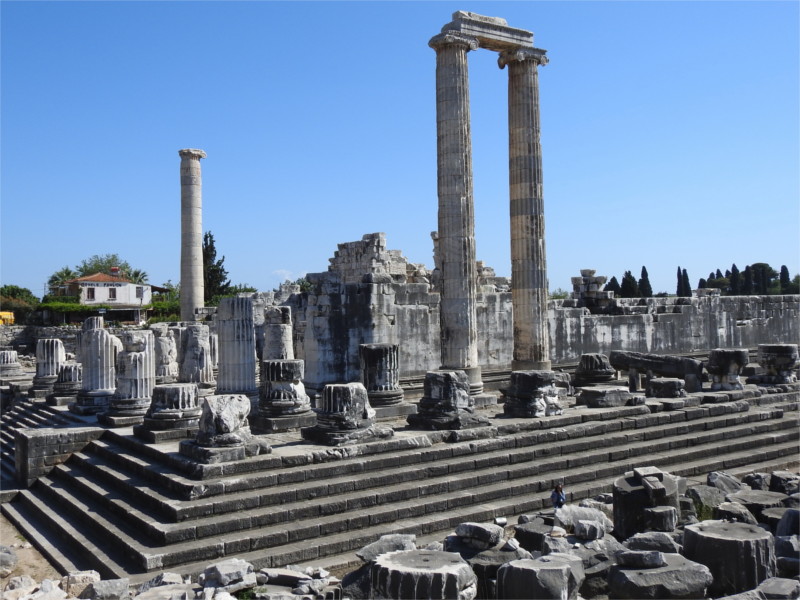 The new temple can be dated rather well, however. After the destruction of the archaic temple in 493 BCE by Persians, the removal of the bronze statue of Apollo to Ecbatana, and the drying of the oracle’s well, the cult of Apollo fell into disuse. Alexander visited Didyma after his conquest of Miletus in 331 BCE, and found that the oracle’s well was full again. Seleucus Nicator I brought back the statue of Apollo in 300 BCE, after which the construction of the new temple started. The architects were Daphnis and Paionios (the latter famous for building the temple of Artemis in Ephesus). 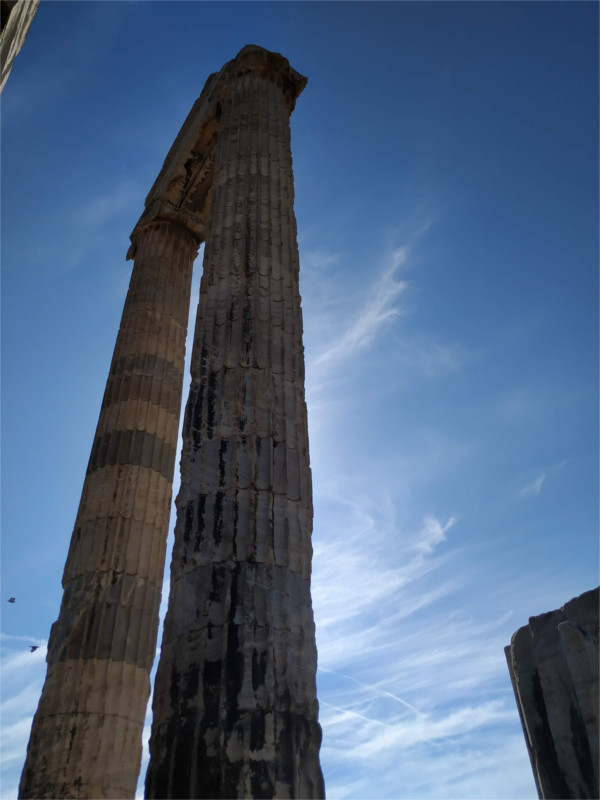 The plan was too grand for the engineering skills of that time. The temple was never finished. The base is rectangular, with sides of length 120 meters by 25 meters. Two rows of pillars were supposed to surround the inner temple, making 122 pillars in total. Only 72 of these were ever built, and even among those, several were not completed. Work proceeded for two centuries, then stopped and resumed only in Roman times. A row of Medusa heads was added to the architrave during this later period. 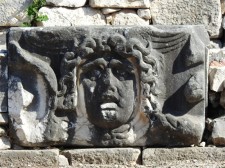 The Family and I walked around the ruins. The sun had started dipping, and the light was brilliant, just perfect for the numerous sculptures (click on the gallery for detailed views) which can still be seen in the ruins. The Medusa heads were the most recent, dating from Roman times. But the sculptures of Nike, bull’s heads, and Gryphons (a Persian touch?) were probably among the earliest. We kept in mind the little sign that we saw on one of the walls (featured photo) and clamped down on the very strong urge to scratch our names into the stone. If you see Khanewala loves Family scratched inside a lop-sided heart on Apollo’s walls, it is not something that we have done. 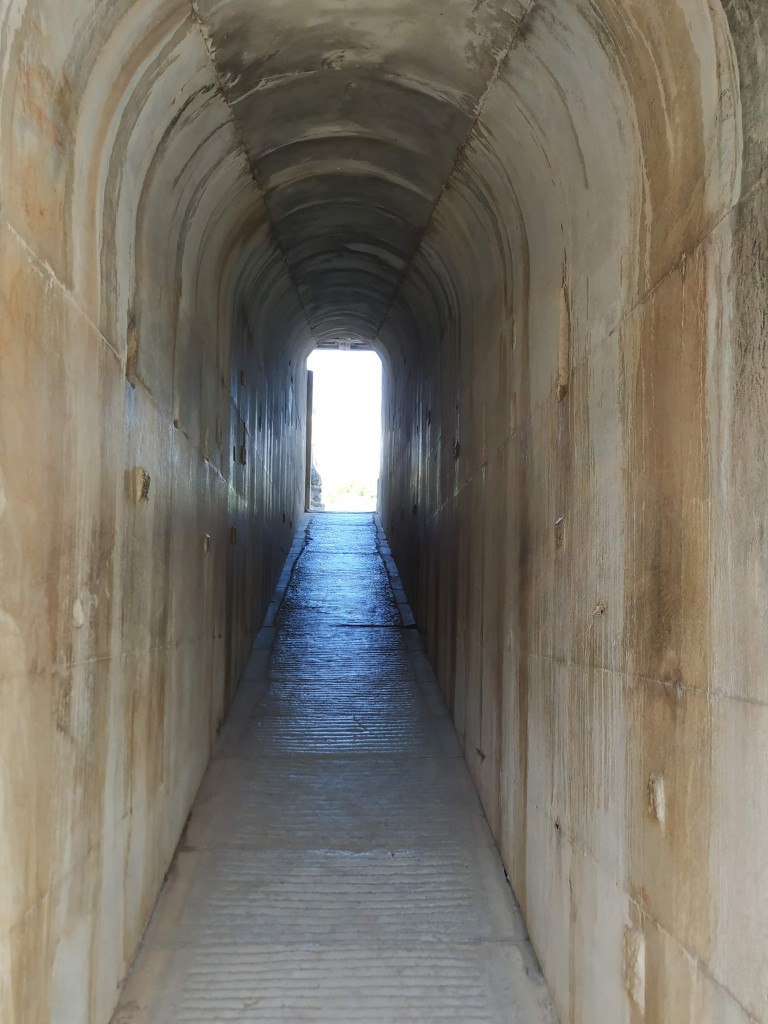 A doorway in the wall led into a sloping corridor through the massive walls of the sanctuary into an inner courtyard. The narrow corridor slopes down fairly steeply. I wondered why. It looked like a slope down which cattle could be easily herded. Were there animal sacrifices inside? Animal sacrifice was common in ancient Greece (as in other Indo-European civilizations of that time, including Persia and India) but the sacrifices were usually made outside the sanctuary, and there was no tradition of mass sacrifice. Each killing was treated as a major event, full of mystical rites, and ending in the division of the meat between participants. It is thought that such ceremonies were the source of most of the meat eaten in those days.

The inside of the temple is enormous. We walked up to the oracle’s well and peered in to see that the water table is fairly high today. Standing next to the well at the northern end of the rectangular space, I took the photo which you see above. The far end of the area has steps. It is possible that people sat there and waited for the oracle’s response. There was an inner sanctum built around the well and the statue of Apollo. So actually this inner arena could have been used for sacrifices, and the narrow sloping corridor could have been used to lead a bull in. The other opening in the wall was a much wider corridor.

After spending some time inside, we took the other corridor out and spent some time looking carefully at the bases of missing pillars. These bases seemed to have been individually decorated. Each one was different. Since the temple was constructed over many centuries, some of these differences probably reflect shifting aesthetics. Do some of the differences also reflect individual choice? Unfortunately writing had not yet become so common two thousand years ago that everyone would record their thoughts and feelings, so many of these questions cannot be answered. 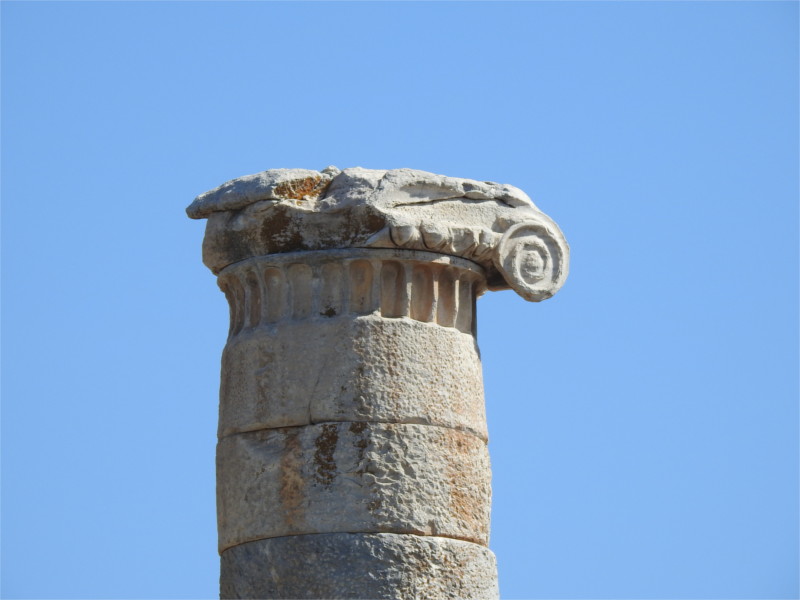 We walked slowly around the temple, first stopping to admire the single standing column on the south-eastern end. From close up this column, almost 20 meters high, looked very impressive. There are disks of stone stacked up very precisely over each other. These were the tallest columns attempted by Greek architects. I’m unable to read or translate classical Greek, so I did not attempt to trace down the inscription which says that each column cost 40,000 drachmas. For comparison, an estimate of the daily income of a person working at this site is about 2 drachmas (this would have changed over centuries, since there is evidence of inflation and deflation of currency in Greek and Roman times). 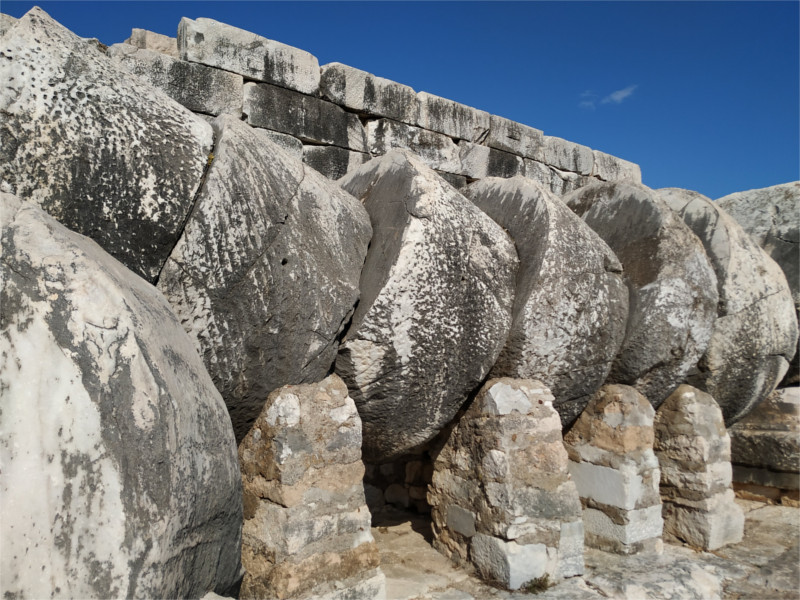 We admired the scroll-work on the capitol of the standing column. As once expects in this region, after Alexander’s time, the columns are Ionic. A board at the entrance had told us that in some of the columns in the front these volutes on the capitals were replaced by heads of Zeus and Apollo. We did not see them in the sculptures displayed at the site. Walking around to the north brought us to an impressive sight (photo above). One of the completed columns has toppled. Each of its constituent disks was higher than me, so they are somewhat over two meters in diameter, and about a meter in height. 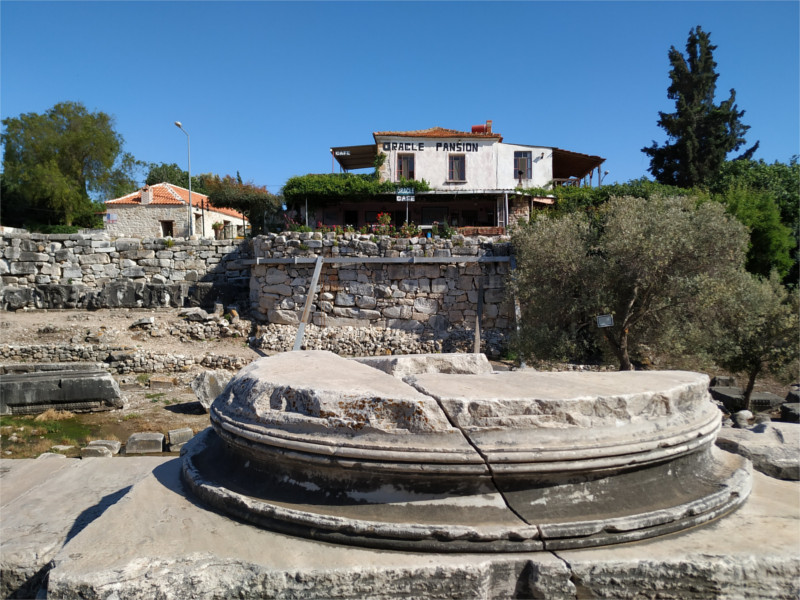 Looking out on from the eastern (back) porch of the temple one sees a line of cafes and restaurants around this place. My favourite was the Oracle Pansion. We’d spent more than an hour inside, and The Family agreed that it was time for a coffee.

13 thoughts on “Visiting an Oracle”