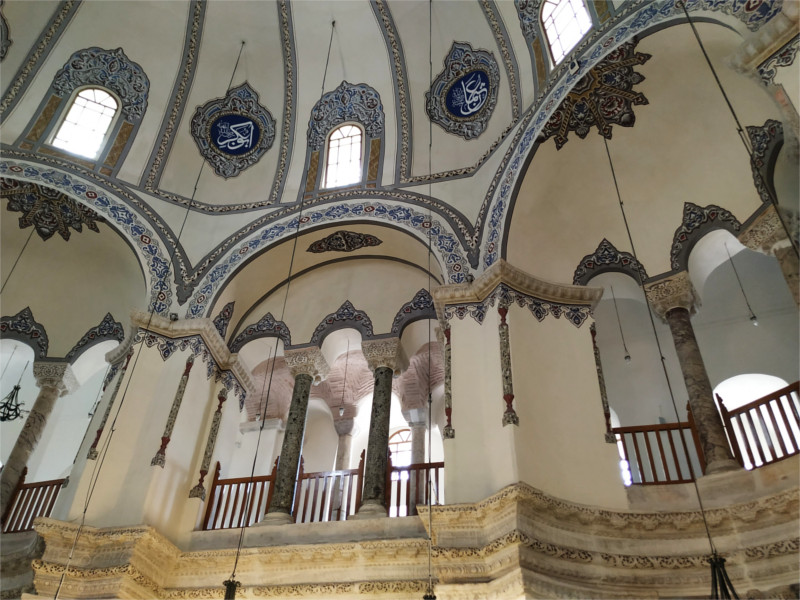 In the 6th century CE, the Byzantine chronicler Procopius wrote that the little Hagia Sophia (then called the Church of Saint Sergius and Saint Bacchus) was second only to the Hagia Sophia in beauty. The construction of this church was started in 527 CE, after Justinian I became emperor, and just five years before the center of Constantinople was burnt down in the Nika riots. It was completed just before the Hagia Sophia, and the architects are said to be the same Anthenius of Tralles and Isidorus of Miletus who are known as the architects of the Hagia Sophia. 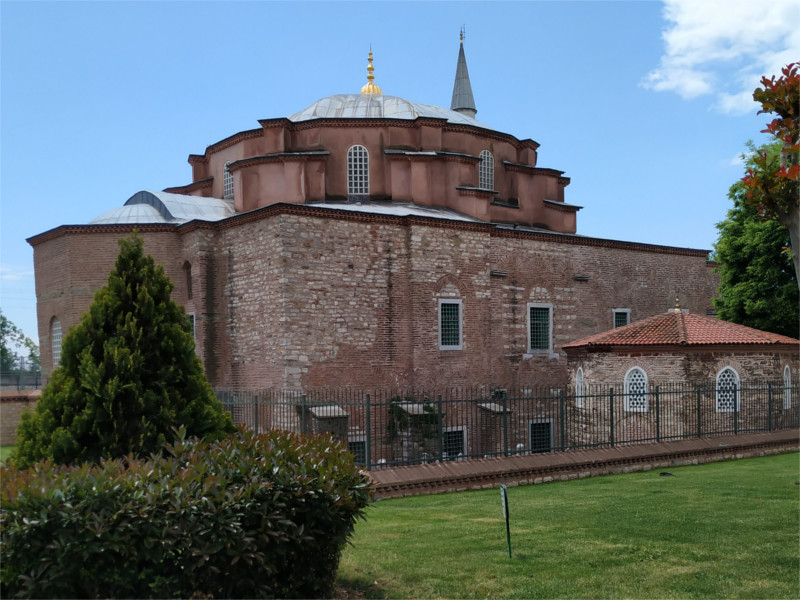 Looking at the structure from outside it was clear that it was not quite like the Hagia Sophia. The dome here is not supported by semi-domes (although there are two), but instead rests on an octagonal base, with large windows on alternate sides. Around this central octagonal column there are other structures whose ground plan, taken together, looks roughly like a rectangle. The church was built out of brick and mortar like most Byzantine buildings of its time.

We entered from a little gate in the north-west. The complex has been used as a mosque since the early 16th century. Right in front of us, on the western end of the rectangle, was a little portico and minaret which were clearly later additions. You can see from the photo above, that they are made of stone and not brick. The main prayer was over, and we were free to enter the mosque. A couple of people washed they hands and faces and said a quick prayer without going in.

As I took off my shoes I happened to glance up, and found a glowing painting on the inner curve of the dome atop the portico. The whole inner surface is plastered and painted white, and the colourful design with its three-fold symmetry was quite stunning. When I looked more carefully I saw an interesting play of numbers here: after the three-fold symmetry of the innermost circle was an eleven-fold symmetry of the next. I wonder whether the ratio 11/3 has some mystic significance. 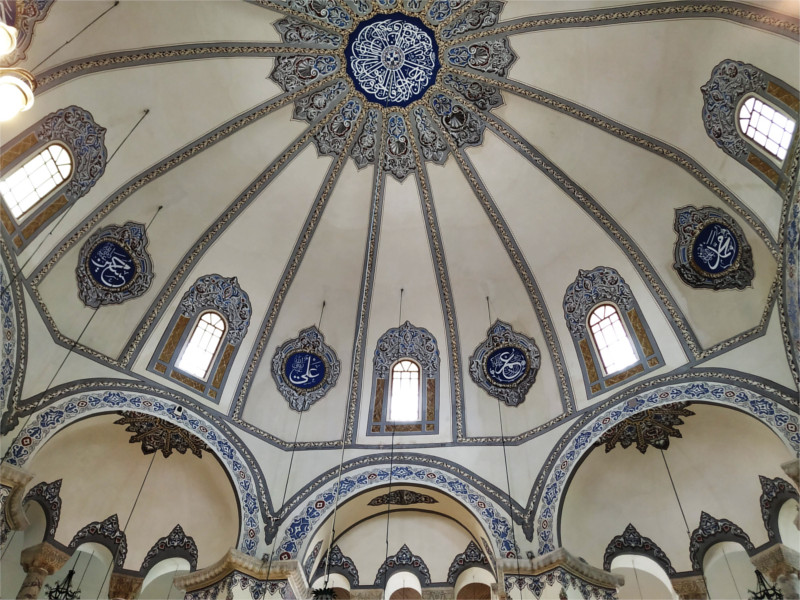 As soon as you enter, your eye is drawn up to dome. This is where the main similarity with the Hagia Sophia is visible: the dome is ribbed and windows are cut into its base. Apparently this reduces the weight of the dome, and is important to making it light enough to span a large space. This was the first Byzantine building we entered after the Hagia Sophia, and the contrast was immense. 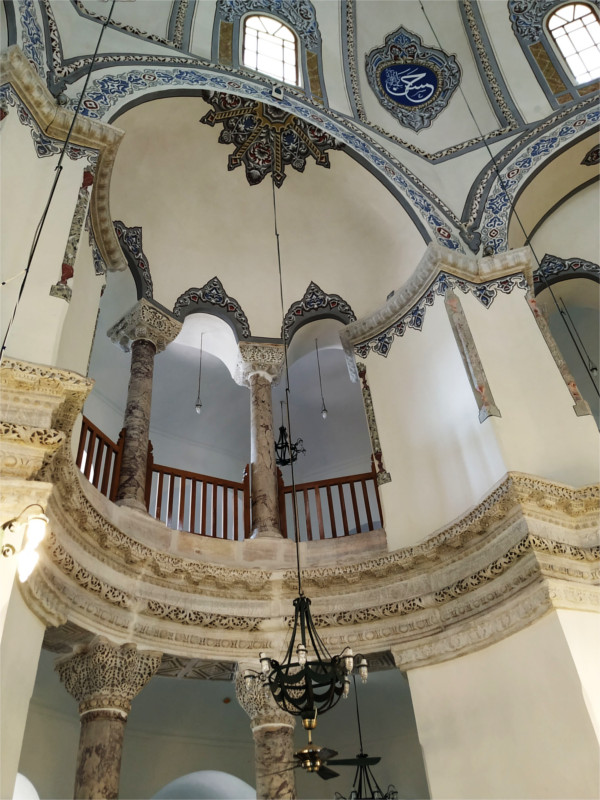 Here the multiple windows in this smaller structure gave it a sense of light and airiness, as opposed to the grandeur of Hagia Sophia’s upper reaches rising out of a deep gloom. As you can see from both the featured photo and the one above, the gallery admits as much light as the dome, and the windows at the lowest level also serve to illuminate the interior. I looked at the stone work of the capitals of the pillars, and the bands running around the gallery and they looked almost identical to that in the Hagia Sophia. Not surprising really, since the two were completed almost simultaneously. The same stone masons must have worked on both.

The Family was mesmerized by the blue carpet. Almost all the mosques that we visited had really deep piles, much better than the carpets we’d been shown in shops. The marble columns were very special; the pair that you see in the photo above were made of Synnara marble brought from Anatolia. Behind the minbar you can see an antechamber; below one of the semi-domes. The stairs up to the gallery were barred; perhaps it would open later. But here, I could admire the wonderful woodwork above my head. I think this is Ottoman, like the painted designs on the wall.

There was no one else around; certainly no other tourists. It was amazingly peaceful and calm. I wondered whether at any time in the future it would be possible to strip away at least part of the plaster to reveal the mosaics which had been praised by Procopius. The train line which runs south of here apparently put the structure under great stress; enough that it was put on the list of the hundred most endangered structures. After extensive repairs a few years ago, it was reopened to the public in 2015. I didn’t know that; lucky we didn’t come here four years before!

17 thoughts on “The Little Hagia Sophia”