We walked into the Istanbul Museum of Modern Art to look at some of the contemporary art in Turkey. One of the interesting exhibitions here was called “The event of a thread: Global narratives in textiles”. The use of textiles in art is not something I’ve seen done systematically. Seeing the pieces collected here all at the same time was very interesting. I took photos of some of the pieces I liked. 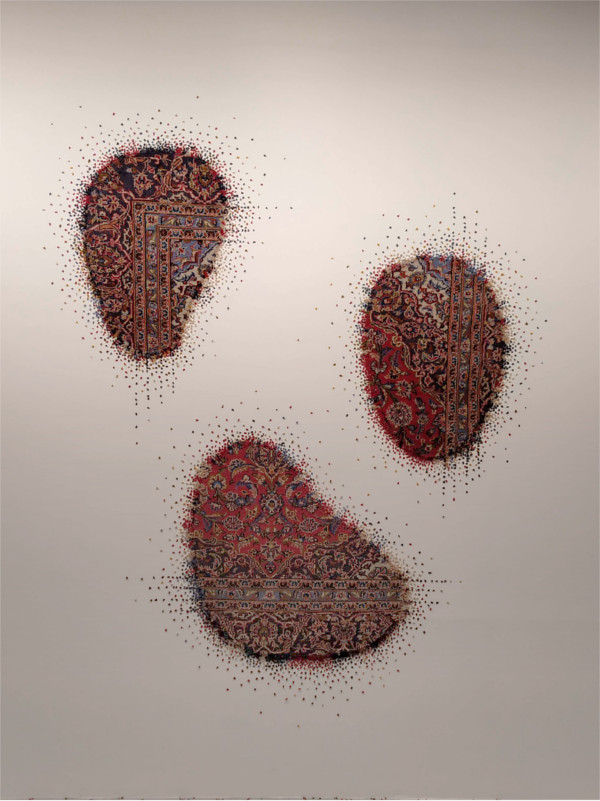 Sakir Gökçebag’s piece called Kosmos was a stunning installation using a partially woven carpet. The artist says that the partial work reminds us about the work that goes into the making of a carpet through the parts which remain to be completed.

This painting on a head scarf by Güneş Terkol was called Against the current. The concept was developed during a workshop in Vienna, where several women discussed the slogans to be displayed, and worked together to sew them into the banners held by the painted figures.

Belkis Balpinar’s work entitled Singularities uses weaving as a medium. She says that two planes with singularities of different forms are joined by the vertical threads which are called warps. The horizontal threads are left unwoven. I liked the medium and the strikingly bold visual pattern that was tied together with the threads.

Another floor held a retrospective of photos by Yildiz Moran, a woman photographer born in 1935. She worked for only twelve years, starting from 1950. In 1962 she gave up photography to look after her children. Her photos seemed to capture Anatolia of her times as sensitively as Ara Güler caught the Istanbul that he knew.