We’d seen two lionesses near a kill, and watched until one crossed the road in front of us and disappeared into the thicket on one side, while the other disappeared into the low palm forest on the other. The show was over, we concluded. Several vehicles left. Anthony took us in a little circle, trying to spot whether there were any other members of the pride nearby. There weren’t. As we were trying to leave, FONT said “She’s back.” “What’s that in her mouth?” The Family asked. In moments it was clear: a cub. We spotted two more in the grass. The mother carried one in her mouth and urged the others along, to cross back to the kill. 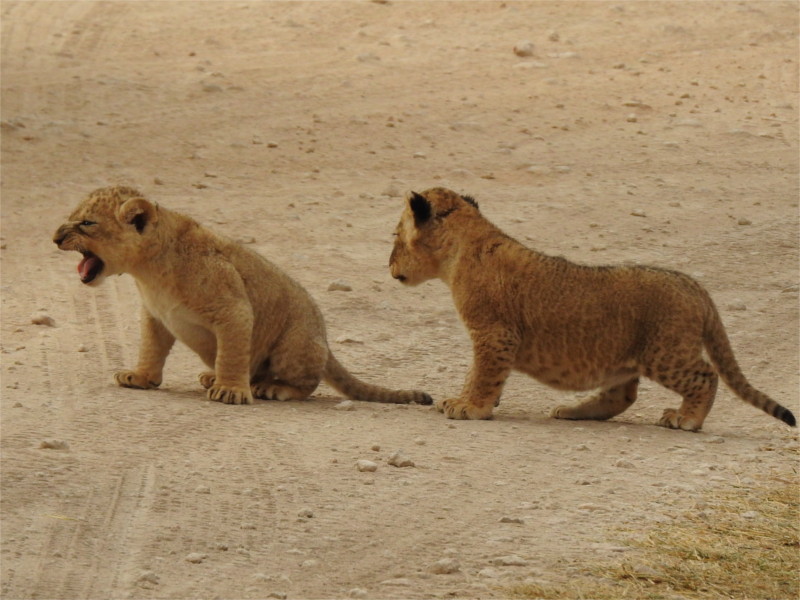 “How old do you think the cubs are?” I asked Anthony. He said “Maybe two or three months old.” I didn’t know that cubs are not introduced to the pride till they are several months old. The two cubs which were following the mother lost confidence once they were out of the grass, and started mewling. The mother came back and carried them across the road one by one in her mouth. In the period before the cubs join the pride, the mother moves them frequently from one den to another so that predators do not get to locate them. This looked like part of such a move. 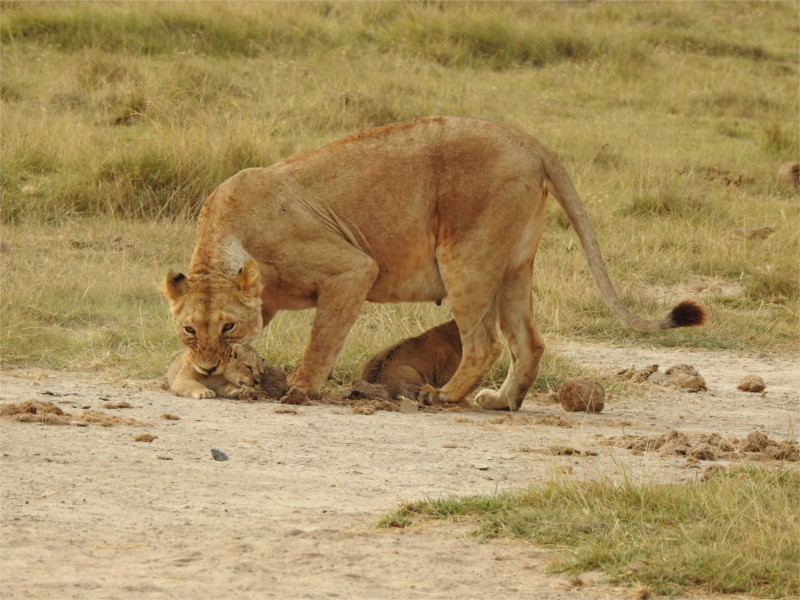 After crossing the road, the mother again picked up one of the cubs and then beckoned the others to follow her by many backward glances as she moved forward. The other two cubs followed for a while, mewling all the time. They hadn’t quite got back their confidence, so the mother had to rotate the cub that she carried. With much divided attention and cajoling, she managed to lead the cubs towards the kill. The other lioness had come back in the meanwhile. She’d clearly been to drink water, because her muzzle was no longer bloody.

The mother let go of the cubs just as she reached the hummock which guarded the kill from the road, and nudged all three cubs forward with her nose. If these cubs were indeed just two or three months old, then they were not yet weaned. While the family crossed the road I’d noticed that the mother was still lactating. The cubs did not seem to be interested in the kill as the two lionesses greeted each other, and then settled down to finish their meal. The kill was fresh; there was no smell. So these two lionesses, one pregnant, the other lactating, had eaten a whole zebra in a reasonably short while.