What can one say about the cheetah that is not already very well known? Once widespread across Asia and Africa, the sleek animal has held the land speed record for about a million years. The superbly graceful animal, which gets its common name from a Hindi dialect word for painted, is now extinct across Asia, except for a small holdout population in Iran. IUCN classes them as vulnerable, but with about 6,500 adults alive, and a 95% infant and juvenile mortality, could this be a hope and a prayer rather than a cool-headed estimate of the chances for its future? 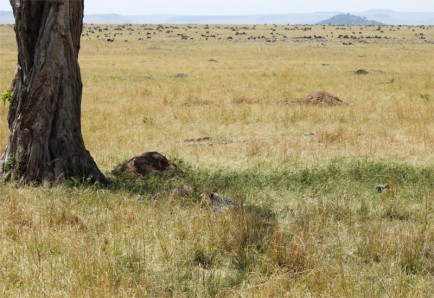 Stephen listened carefully to the radio chatter, asked a couple of questions, and, after a few false turns, brought us to a tree below which two cheetahs rested. Cheetahs hunt during the day, but this was just around noon, the hottest part of the day. The two took turns to keep watch. as we took a bunch of photos. Given their rarity, I count it an immense bit of luck to have seen them at all. It would have been great to see them walking, and an absolute joy to have seen a chase. But I agreed with The Family when she said “This is wonderful.”

8 thoughts on “The Big Sleep and The Long Goodbye”