The ancestors of humans may have lived in rain-forests or grasslands, deserts or river valleys, but much of our knowledge of our own deep history comes from a relatively few fossils, a large fraction of which are on display in the National Museum of Kenya in Nairobi. This was one place that The Family and I were determined not to miss. We’d left it till the last day of our stay, but we kept aside the whole morning for it. There’s a lot to see, and it does take a while.

Our understanding of human evolution can change when new fossils are found. But what we do know now is that about 7 million years ago the climate became drier, and the dense forests of Africa broke into a patchwork of grassland and forest. In this new and cooler earth, East African primates diverged from their ancestors and became bipedal. Early hominins included the genus Australopithecus. The near-complete skeleton of a specimen called Lucy stands in the outer hall of human evolution. This is a little older than 3 million years. It is amazing to see that they are small, just over a meter in height. At half the height of modern humans, it is not hard to believe the explanatory material which says that they were “prey as much as hunter”.

About 2.3 to 2 million years ago genus Homo seems to have become common, at least if one is to go by the fossils found in and around Lake Turkana. The skull of Homo rudolfensis (photo above) was found by Richard Leaky. It has a largish skull, with a brain volume of 750 milliliters. I thought the face looked a little primitive, so I was surprised to find that the brain was among the largest of its time.

In a case next to it was a skull of Homo habilis (photo above). This looked more like a human’s I thought, but its brain was smaller (about 650 milliliters). The skull was found by Louis Leaky in the 1960s, roughly ten years before Richard Leaky’s find. There was quite a crowd in this side gallery where these more modern pre-human remains are on display. Both these species were tool users; it seems that the technology of stone tools in older than Homo sapiens. 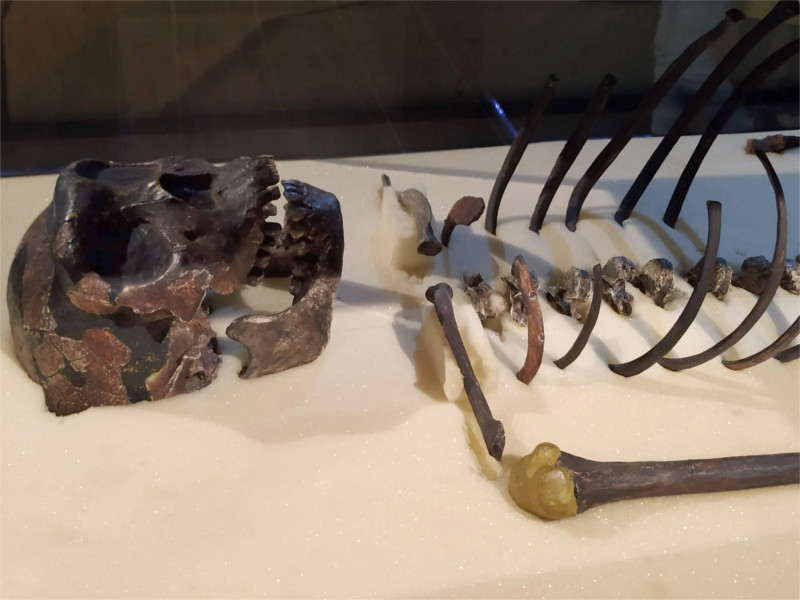 The star of the show is the near-complete skeleton of the Turkana Boy (aka “Nariokotome Boy”, photo above) found in 1984 by Richard Leaky. This is a skeleton of an 11 year old boy of the species Homo erectus, which had died 1.4 million years ago. To my untrained eye the spine looked like it belonged to something that walked on two feet, but apparently it is not so clear at all. There were years of controversy before experts began to agree. Homo erectus, with a brain of about 900 millilitres (a photo of a skull is below) , seems to have evolved about 1.8 million years ago, and could walk, run, and throw accurately.

Another thing that experts seem to agree on today is that H. erectus created the technology of the symmetrical and well-shaped “hand-axes” that you see in the featured photo (these are called Acheulian tools, and have been recovered from across East Africa and Asia) and traveled out of Africa into Asia, A million years later, the African population evolved into Homo sapiens, built better tools, and migrated out of Africa again to eventually take over the world. Many details remain unsettled, but this big outline has lasted for about 30 years as more fossils are discovered across Asia and Africa.

4 thoughts on “Lucy and diamonds in the mud”