One of the walks I’d planned in Nanjing included one of the five most famous gardens of Southern China: the Zhan garden. This Ming-era garden was given its present name by the Qing-dynasty Qianlong emperor when he visited the garden, perhaps in the mid-18th century. I’ve been walking through Chinese gardens, puzzling out their aesthetics, and a chance question by a colleague allowed me to reflect on what I’d seen. Sharing a taxi to the airport, he asked “Are they like Japanese gardens?” I thought for a while. Yes, perhaps in their cultural importance they are. But architecturally they are different.

A beautiful courtyard and trees

A waterfall viewed through a moon gate 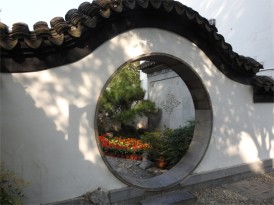 A moon gate with flowers

No garden is complete without cats

Selfie point: a pavillion near the willow pond

One of the chirping sparrows

One of the black swans

The willow pond and pavillions

They seem to be laid out in a series of areas connected by passages or moon gates. The most popular area in the Zhan garden is near the western entrance, with a large pool, multiple pavilions, willow trees drooping gracefully into the water (featured photo). This is a wonderfully pretty spot, and a magnet for people taking photos of loved ones, or selfies with them. But linking different scenes is part of the architectural design. So you can walk from here into the southern rockery, with its massive pile of stones and trees. Once you get past that you are in a pool again, surrounded by rocks. This pool held a couple of very sleepy black swans. You could walk across stones into a pavilion, and pass through it into a bamboo grove where a large tribe of sparrows were chirping and flying around. Then somehow there was the sound of falling water, and I walked through a moon gate to see an artistically constructed waterfall in front of me. Trees, flowers, birds, even a cat or two, still and flowing water, a succession of sounds, these seem to make up Chinese gardens. Now that I’ve started paying attention to these gardens, I think I have to keep looking at more.