The profusion of reliefs in Hampi showing horse traders seems to bear out a factoid that I’d heard repeatedly: that the Vijayanagar empire was the richest in the medieval world during its century of dominance, from the mid 15th to the 16th century CE. This probably has to be qualified slightly, since this was also the heydays of the Ming dynasty in China. But comtemporary records seem to indicate that the medieval city of Vijayanagara was not much smaller than its contemporary Beijing. It exported diamonds and imported horses. Its capital was a market which attracted Arab traders, and eventually Portuguese and Dutch travellers. 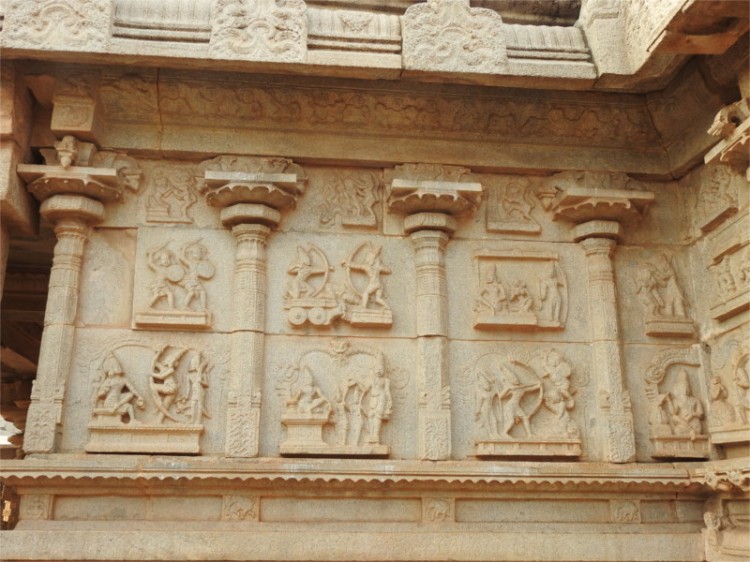 From various sources we know today that the most productive diamond mines were owned by the king. Workers were paid wages, but no other incentives. Based on the recorded wages paid to workers in the diamond mines, Pande and Raviteja wrote “Thus it may be constructed that the labourers in the mines probably led a miserable life.” The incredible difference in the quality of life of kings and commoners was noted by several travellers. It is likely that horse traders were far better off than the masses.

Iron, bronze and copper were mined and used. Iron was smelted in charcoal furnaces to make steel. In his influential book on the Vijayanagara empire, Robert Sewell wrote in 1900 that irons and steel was largely used to make weapons, but there was sufficient surplus to be turned into common household objects. The construction industry was dominated by temples and palaces, and employed a large number of masons, master builders, sculptors and various other artisans. Records of donations to temples show that artisans were well-off. Stone walls in temples (see photo on top) are dressed with precision, blocks sized and matched perfectly to sit on top of each other. So the lack of precision in the dressing of stone blocks in public works like the aqueduct of Anegondi (photo above), or the Mahanavami Dibba, cannot be attributed either to the lack of metals, or the lack of trained artisans. If this has not already been investigated by historians, then here is a mystery to be solved.