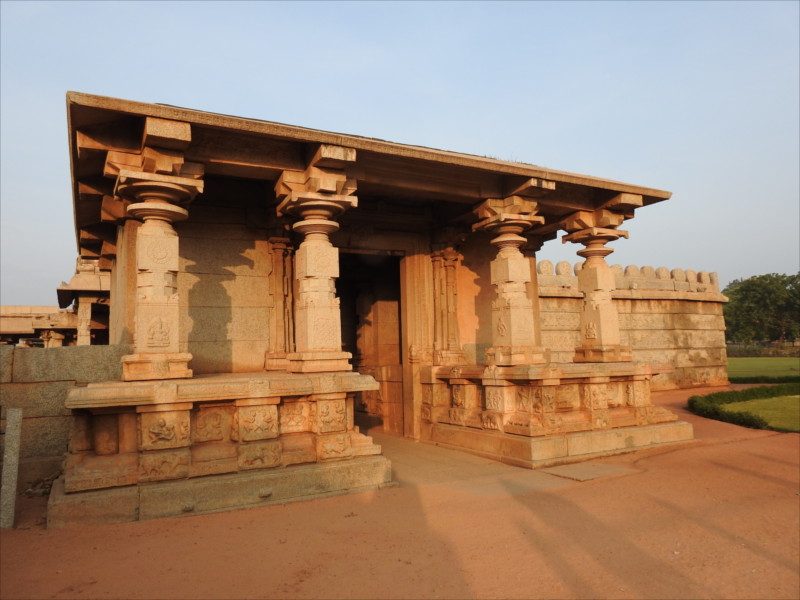 I was jaded when I walked into the Hazara Rama (or Hajara Rama) temple in Hampi, but this little jewel box instantly brought me to life. We saw it very briefly late one afternoon and decided to come back the next morning. This was one of the best decisions we’d made, because the morning’s sunlight was beautiful on the granite which was the material of choice for builders in the Vijayanagara empire. The temple is in a square enclosure in one corner of the royal palace area. As we reached the eastern entrance (photo above) I realized how lucky we were with the light. 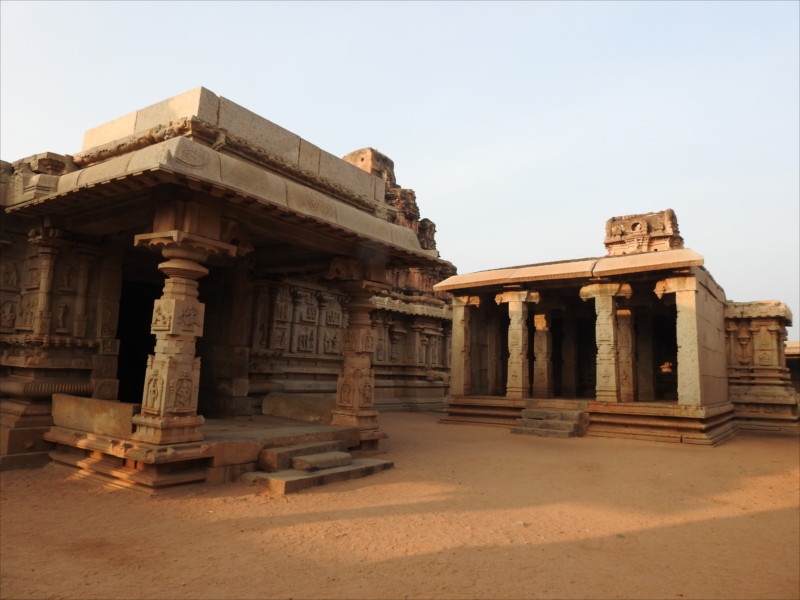 The Vijayanagara architectural style is modest. Like all medieval Tamil temples, they are part stone and part brick. The stone structure is a flat roof supported by pillars. The Vijayanagara pillars are moderately slender, with a slenderness ratio of 12, broken into two boxy pieces joined by slender necks. The boxes are canvases for the lovely low-relief sculpture which Hampi is famous for. The roof may carry a brick shikhara (spire) decorated with clay images. The temple plans are simple: a square sanctum, with surrounding bays (ardha mandapa) and further recesses. Often, the general impression is that a circle is filled in with a series of squares. In Vijayanagara, there are always separate mandapas (pavilions) for the goddess, which may obscure this plan. This temple contains all these elements, as I discovered as I walked around it. The photo above is of the northern porch, and shows one of the side mandapas scrunched into the courtyard. Perhaps it was a later addition.

The pillars in the eastern ardha mandapa were made of polished blackstone. This was so unusual that I wondered whether it had been brought from elsewhere, but a culture which has the tools to sculpt granite will probably be able to polish the softer blackstone. A wonderfully informative booklet from the Archaeological Society of India, available with every vendor who pursues you through Hampi, tells us that Hajararama should not be confused with the Hindi Hazara Rama (which would mean a thousand Ramas), but actually comes from the Telugu Hajaramu (meaning audience hall). The blackstone reliefs show Vishnu in many aspects. The depiction of Vishnu as Kalki, seated on a horse (photo above) was unusual and caught my eye. 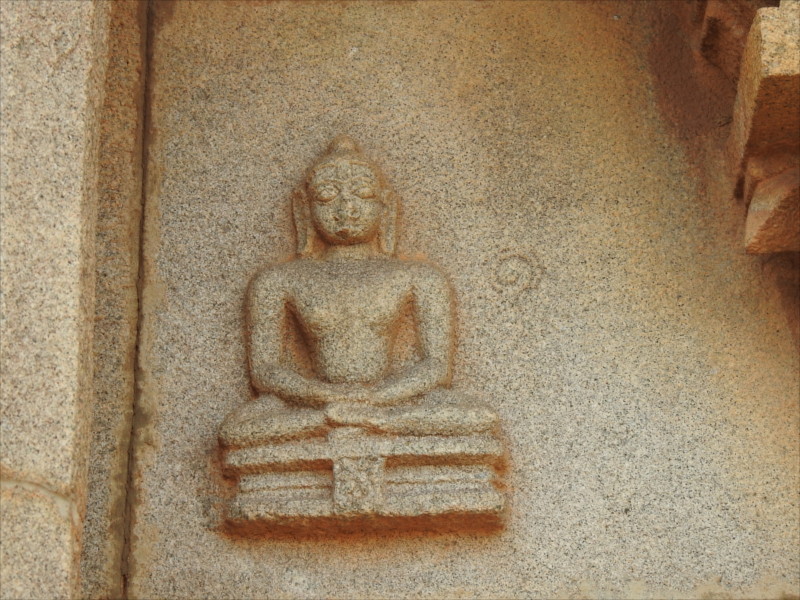 Elsewhere I found another unusual depiction of Vishnu, as Buddha. By the medieval period the absorption of Buddhism into Hinduism in India would have been far advanced, but finding this image here made me wonder about the dating of this temple. Strangely enough, with all the literary and epigraphical analyses of Vijayanagara that one can read about, datings of structures are remarkably imprecise. The ASI booklet points out that stylistically it is transitional, with added elements from later, and mentions an epigraph which attributes the temple to Devaraya. There are two Devarayas, the first ruled from 1406 CE to 1422 CE, the second from 1424 CE to 1446 CE. Another epigraph could be interpreted as the name of the queen of the second Devaraya. 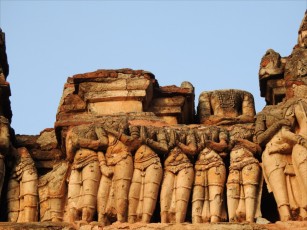 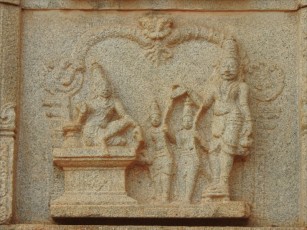 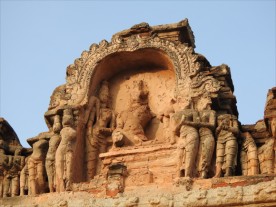 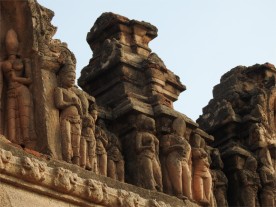 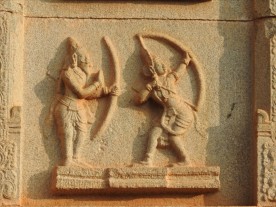 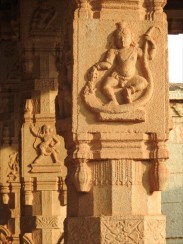 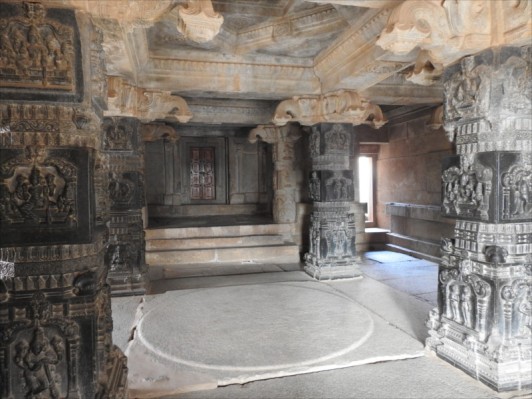 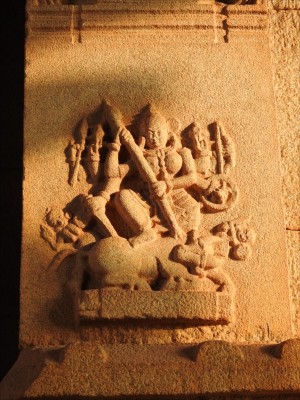 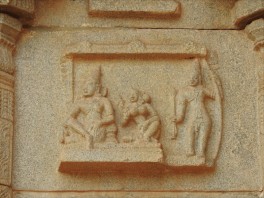 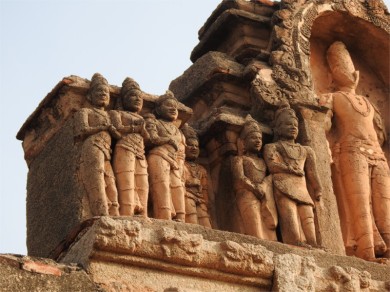 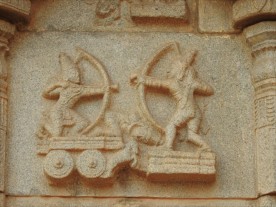 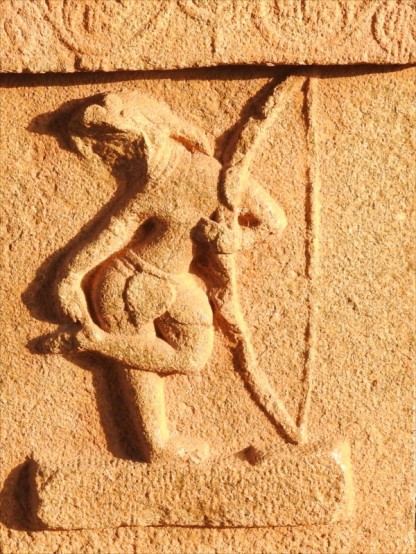 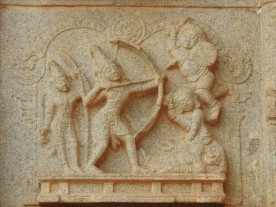 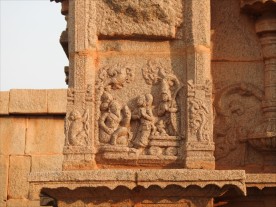 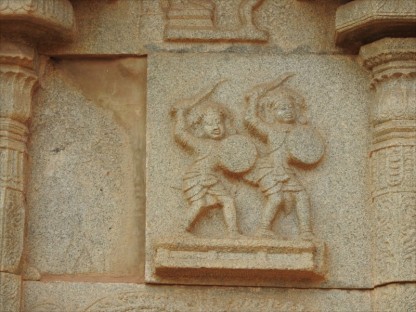 The amazing thing about this temple is the profusion of imagery, the beautiful relief work. There are panels which tell the story of the Ramayana, including early chapters such as Dasaratha killing Sharavan Kumar by mistake and then being cursed by his father to living his life without his son. The story of Surpanakha, Rama’s swayamvara, Vali and Sugriva, the abduction of Sita, the war, and the return to Ayodhya are all laid out in carved granite. The clothing, court scenes, and arms tell us much about the times of the Vijayanagara empire. I was also charmed by the little touches: monkeys, elephants, birds. We must have spent well over an hour in this little temple.

One image that stays with me is the one above: a little decoration in a larger panel. I’ve seldom seen knots depicted in temples before. This one, with two snakes intertwined is a nicely complex shape. You can see that each snake can easily wriggle out of the knot. But the shape can be turned into a pretty problem if you imagine each snake curling to bite its own tail. Then you have two circles which seem to be hard to disentangle. Are they really? If each snake bites the other’s tail, can the resulting shape be untangled into a single circle? I spent some happy hours thinking about this, and I leave you with this puzzle, if you like such things.

8 thoughts on “The palace temple”