Another Monday! Another day to quietly nurse the hangover of a lovely Sunday spent in the open air; the pleasant drowsiness of waking in the morning after spending a day walking through air so polluted that you can cut it with a butter knife. My lungs feel more tired than my muscles, but it was a nice weekend.

This post is a guest post in spirit, with photos by The Family. She took them from a launch which puttered through Mumbai’s harbour. Strange creature! You can see the gulls craning their necks to look at it.

The weather’s been a little cooler than normal but does that mean it is winter? You wouldn’t know till the brown-headed gulls (Chroicocephalus brunnicephalus) and black-headed gulls (Chroicocephalus ridibundus) arrive. They have spent the summer in the cooler altitudes of the Himalayas, and the cooler latitudes of Central Asia, China, and Mongolia, and in the last month they have arrived here ahead of the displaced polar vortex which is currently shedding snow across the Himalayas. 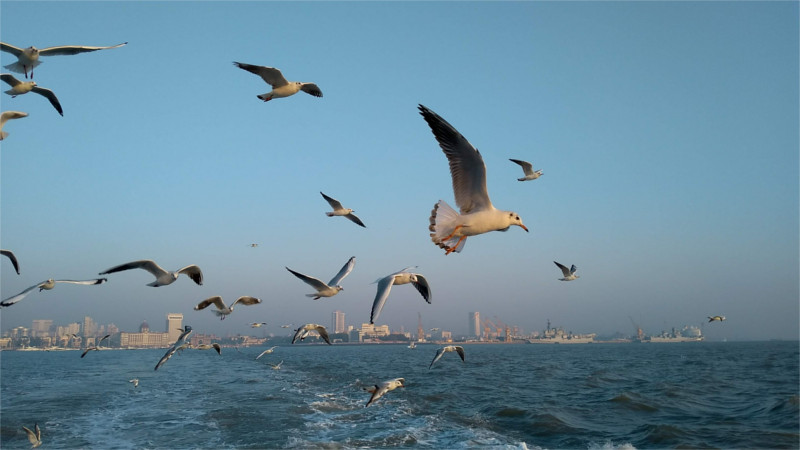 I like this lovely shot of Mumbai’s skyline at sunrise with a whole bunch of gulls following the boat in hopes of a snack. Why call these birds brown or black headed, when they clearly have clean white heads? That’s because they have brown or black heads in the summer breeding season, something that we’ll not get to see in Mumbai. In these waters they have black-tipped yellow beaks, white heads, and a small comma of black on the head behind the eyes. The patch of black on the head distinguishes these two from the slender-billed gull, which has sometimes been seen here. The beak of the brown-headed is distinctly stouter, but that may be hard to see when the bird is flying.

An easier way to tell the difference on the wing is to look at, er, the wings. Both have black-tipped wings, but the mature brown-headed gull has a patch of white inside the black. The wing colour of the immature black-headed gull is more brown than black. It is a pity that the harbour is not the center of Mumbai’s leisure life. The western shoreline: Backbay and Marine Drive, the Worli seaface, and Madh island get mentioned a lot. But to enjoy the sea you need to be in the water, and there is no place other than the harbour where you can do it.