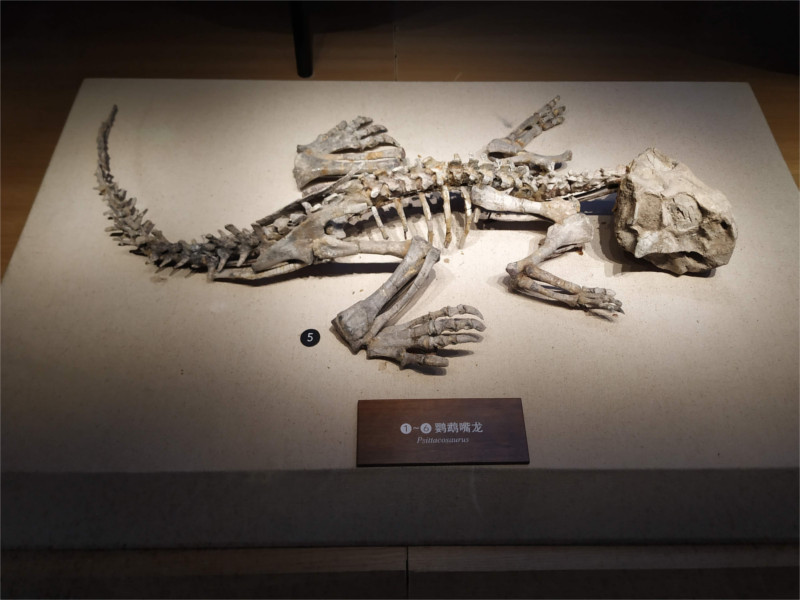 If you saw Friends! in its first season, you might remember that in a rather momentous episode Ross goes away to China for a week. He explained to Monica that a bone had been discovered, and that he had to get it. It was a very current episode for 1994, when new dinosaur fossils were beginning to be unearthed across China. When I passed through Shanghai a few months ago I decided to visit the Shanghai Museum of Natural History. It is easy to find, since there is a metro station named for the Museum, right next to it. The discoveries in China have completely changed our view of dinosaurs. The sheer number of fossils has allowed studies of entire life histories, including growth rates and reproductive behaviour, and even their colour. The fossil whose photo is featured is one of a 100 million years old genus called the Psittacosaurus, because of its parrot-like bill.

Next to the case with the fossil skeleton is a big draw: an animatronic model of one of the species of Psittacosaurus. The explanatory note says that the model is programmed to show it defending its nest full of eggs. There is physical evidence of the colour and proto-feathers. So much so that, if I were an expert, I would be able to tell the species by the colour, like in some bird genera today. I’m sure that much research has gone into the behaviour being exhibited. Predictably, the display was very popular with children, as you can figure out from the soundtrack, if you play the video. For a while now, movies such as Jurassic Park needed a reboot to display dinosaur feathers and their colours more accurately. This model is a nice way to get rid of the outdated iconography of dinosaurs.

8 thoughts on “Ross finds a dinosaur”