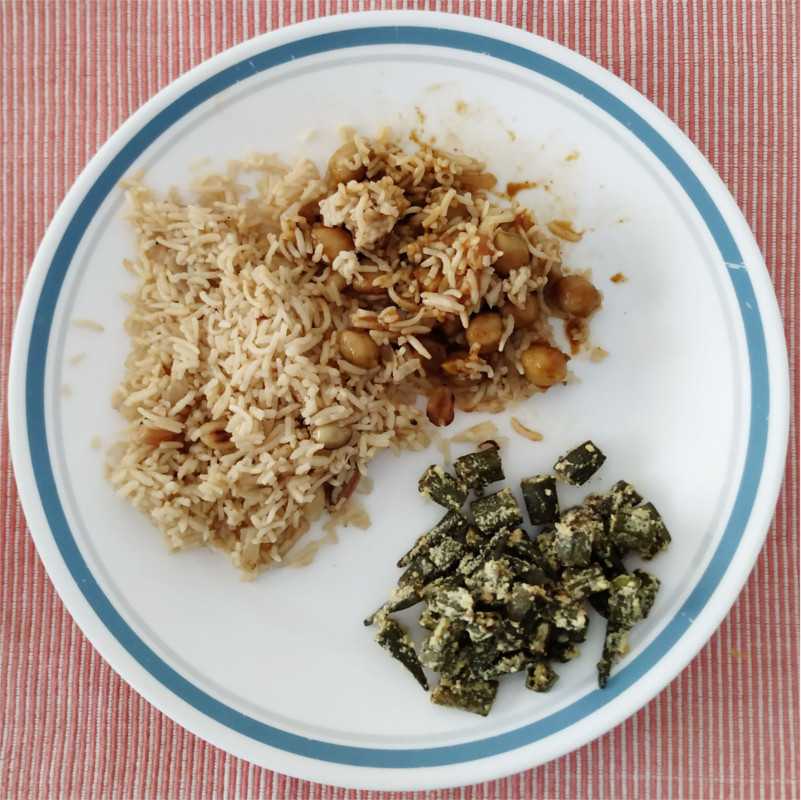 We are now into the second half of the second month of the lock-down. Our group of buildings is an enclave of safety in the middle of a hot zone. The supply chain has truly broken down, so finding fresh vegetables is a bit chancy. The Family rescued some sun dried bhindi (okra, lady finger, or gumbo, another of the many pieces of technology we have inherited from prehistoric human) from a corner of the room we have turned into a pantry and larder. When I began to chop it I realized that the gummy resin had got stickier as it dried. It had to be cooked dry. I threw some powdered dhania and turmeric with entire cloves and black pepper into a pan, and fried the bhindi till the gum had dried up. Then I scooped a lot of yogurt into it, covered it, and let it simmer.

Although the bhindi had released an aroma while it cooked, I realized that it wouldn’t have much of flavour when it finished cooking. So we decided to make an aromatic pulao to go with it. The basmati took four rinses to clear, and I soaked it and set it aside. I took a handful of raisins and peanuts and soaked them in water. It is easy to remove the skin off the peanuts when it is soaked. Next I scooped a little star aniseed, cinnamon, mace, and cloves into the mortar and ground it coarse. When I was ready, with the peanut skinned, the raisins soft, the rice drained, it was time to heat a little oil in the pan. The masala is fried until it begins to release an aroma, then a finely chopped onion is dropped into the oil with the raisins and peanuts and fried to a golden colour. I fried the rice for a short while to make sure that the grains would not stick together, and then added to water to let it cook.

The Family had a large pot of chana masala ready, and we had our little epidemic Saturday lunch. In the first six weeks of the lockdown we had prepared ourselves for such food with a fat, fiber, and protein rich diet. Now there will be weeks of carbohydrate-rich food to eat before we are allowed to move about more freely.