I woke up to the cascading sound of heavy rain and the whistling of wind through ventilators. The tide was beginning to recede, but it was still high enough that the rain water was not able to drain out of the lawns. There has been a flood alert down the coast. In the city it will be worst at high tide. Pent up at home this week, I began to look through my photos of past Augusts, and selected a few from the first year of the decade. 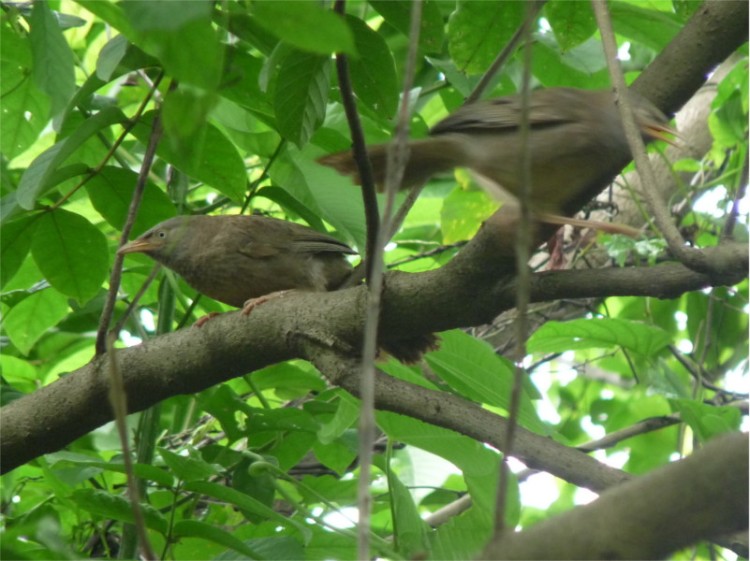 The jungle babblers are the quintessential angry birds, scolding each other in the low branches of trees and hopping about in the undergrowth. I haven’t heard them in my neck of the woods. They used to be common earlier. Have they moved away? It is quite likely that they are ecological refugees driven away by the recent heavy use of pesticides which has killed their source of food. Maybe I need to explore other parts of my neighbourhood next week. Perhaps a group or two still survives.

Butterflies are other sacrifices to the altar of the new insectivorous gods. A few years ago the gardens around me were full of butterflies, like the glossy specimen of the common crow (Euploea core) you see in this photo. This season I’ve seen a few flitting about, but they are not at the densities I was used to once. A twenty minute walk in the garden would give me twenty good photos of butterflies a decade ago, and good sightings of rarer ones like the blue in the featured photo which I haven’t identified yet. It is unfortunate that a knee-jerk response to viruses is to spray against insects. This is what man-animal conflict looks like.