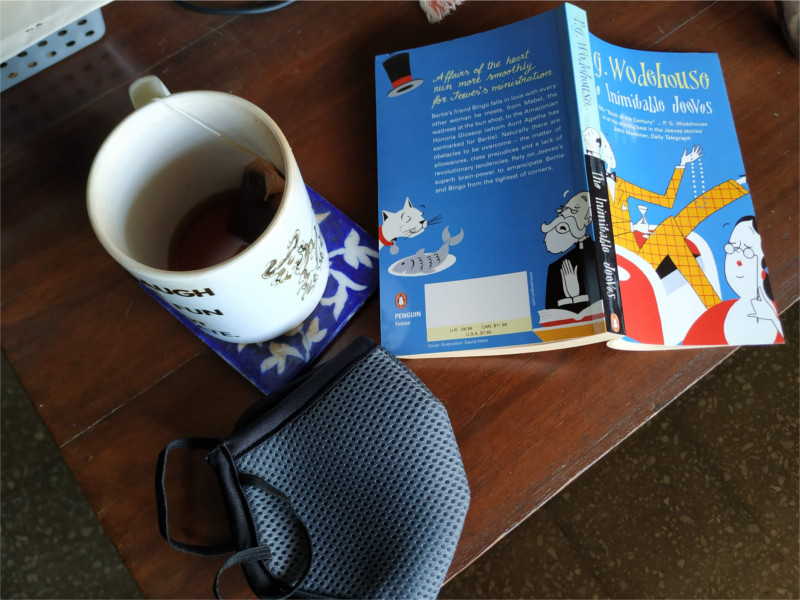 Several times in my life I found myself losing all desire to read. Sometimes it has been times like now, when your mind creates an emergency you can’t seem to snap out of. Sometimes you are unable to stop reading a worthy book which you just cannot get yourself to pick up again. Whatever the reason, I find that my way back to enjoying reading again is to pick up one of the nearly hundred books by P. G. Wodehouse. One of the copies of a book I have quotes Evelyn Waugh in a prophetic mode: “Mr. Wodehouse’s idyllic world can never stale. He will continue to release future generations from captivity that may be more irksome than our own.”

I picked up two old favourites. I’ve bought and lost copies of them many times since at age 12 I inserted them between the covers of my social studies book and read them in class until I was discovered because I burst out laughing aloud. Now I read the stories I know every turn of for those wonderfully burnished sentences which Wodehouse was a master craftsman of.

“It made such a difference to someone, he explained, if someone had someone someone could lean on at times like this.”

“At this point Bingo fell into a trance, and only came out of it to wrap himself around a pie and a macaroon.”

“Vanessa was conscious of a thrill of happiness which had the effect of making even the Earls and Countesses beautiful.”

“When Jeeves came shimmering in the next morning with the breakfast tray, I lost no time in supplying him the full information re the harrow I found myself the toad under.”

“He was a great writer of letters to the Times, the government could not move a step without hearing from him.”

“Silly ass, don’t you see that this is going to do you a bit of good when the Revolution breaks loose? When you see old Rowbotham sprinting up Piccadilly with a dripping knife in each hand, you’ll be jolly thankful to be able to remind him that he once ate your tea and shrimps.”

“Very good,” I said coldly. “In that case, tinkerty tonk.” And I meant it to sting.

“Then I noticed that she looked considerably rattled, and as for the brother, he looked like a sheep with a secret sorrow.”

I can’t think of better lines to end the last post of this year than the following: “Lord Emsworth lay back in bed. His letter on its way, he was wondering, like all authors who have sent their stuff off, if it could not have been polished a bit and given those last little touches which make all the difference.”

10 thoughts on “The joy of rereading”