In the middle of the old town in Bielefeld, with its post-war shops and restaurants, is the tall church of St. Nicholas (Nikolaskirche). I found very little written down about this church. It is the oldest in Bielefeld, having become an independent parish church as long back as 1236 CE. The beautiful altarpiece (photo above) is noted as having been carved in the Antwerp workshops of St. Luke’s guild and delivered in 1524 CE.

I was captured first by its doors (photo above). They were made in 1963 by the sculptor Gerhard Marcks, who was one of the founders of Bauhaus. Although I’ve passed them before, I never managed to enter the doors before they close at 6 in the evening. I made a determined effort yesterday, surprising The Family by reaching the church at 4:30. We were the only people inside for a while. 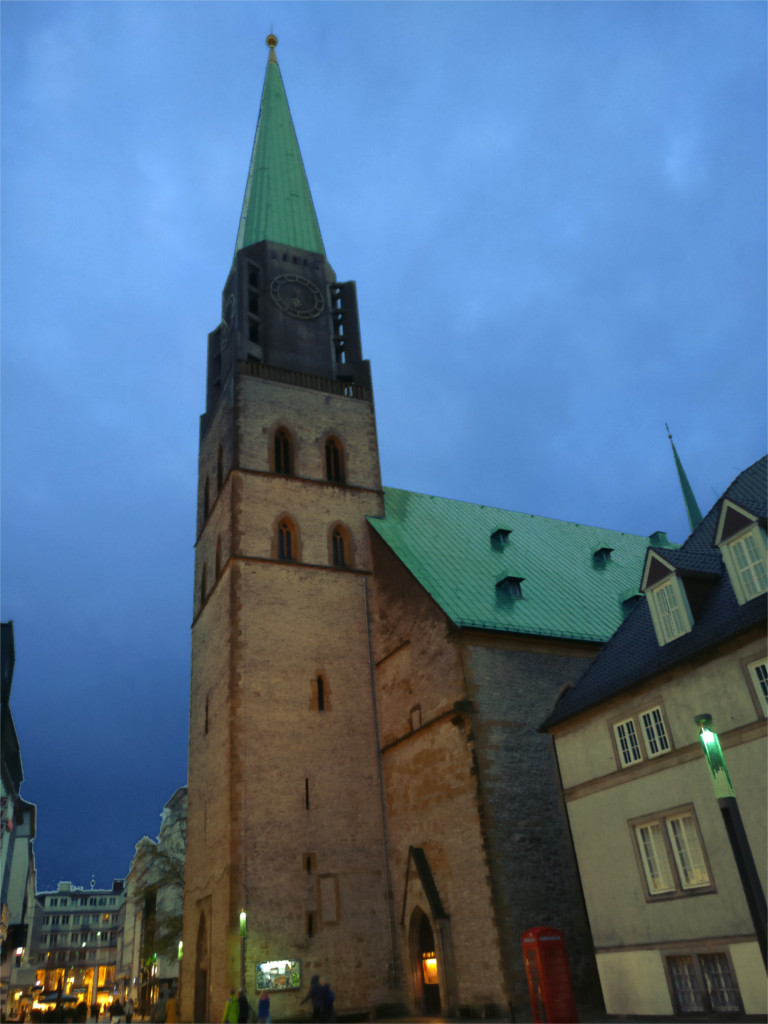 The old town center does not give you much space to stand back and admire the building. From any place which gives you a clear view, it looks high and imposing. The tower is just over 80 meters tall. Inside the church I saw photographs taken after the 1944 air raid on the center of the town when only the bottom of the tower and the walls remained. A reconstruction started in 1954, and was completed by 1963.

Perhaps this hurried reconstruction is the reason why the church looks so bare inside. The vaulting looks like it has been made of bricks. The tall lancet windows have a simple post-war look that you find across Germany: tiles of tinted glass (you can see the reflection of one in the photo below). The pulpit, which was made in 1989, just has text carved into wood. Even the stairs up to the organ are modern constructions. There is a clear rejection of pomp in the design. This is one of the refreshing changes that happened in the public sphere in post-war Germany.

I understand that the church is not known for its acoustics. I asked a friend who is a bit of an expert on organs about the one you see in the photo above. He said that the straight lines and rectangular boxes are definitely 20th century, perhaps from the 1950s or 60s. I can’t find any record of pre-war organs in this church.

In the featured photo you can see a painted wooden statue near the altarpiece, and the rose window. This was designed by Karl Muggly in 1954. The chandeliers are baroque and date from between 1637 and 1707. Apart from these and the altarpiece, the only older work is a little statue inside a glass case in one corner of the church. From the explanatory text near it, I gathered that it is a remnant of an external decoration.

It is interesting to see a church which might have been built first in the mid-14th century, but was reconstructed almost entirely within living memory. I suppose that if you look hard at many places in Germany, you will find histories of this sort.