Charmed by Guangzhou, we landed again in Shanghai. In some ways this remains our favourite Chinese city. We’d taken a hotel on Nanjing Road for the night since The Family wanted to stroll again on the Bund. Unknown to most Chinese, Shanghai bears a close connection with India, especially in the 70 years between the American Civil War and the Japanese invasion of China. This was a time when Indian merchants traded extensively with India. The word bund, is of course, a Hindi word meaning a flood control wall. That’s exactly what Shanghai’s Bund was built to be. Another connection is with Mumbai, through Victor Sassoon, the 3rd Baronet of Bombay, who in the 1920s and 30s invested several millions of US dollars (of that time) in Shanghai, created a real estate boom, and is said to have owned 1800 separate properties in downtown Shanghai. The Baronet was different from other traders. His family had sunk money into the development of Bombay in previous generations. Now he put his wealth to work at the development of Shanghai. 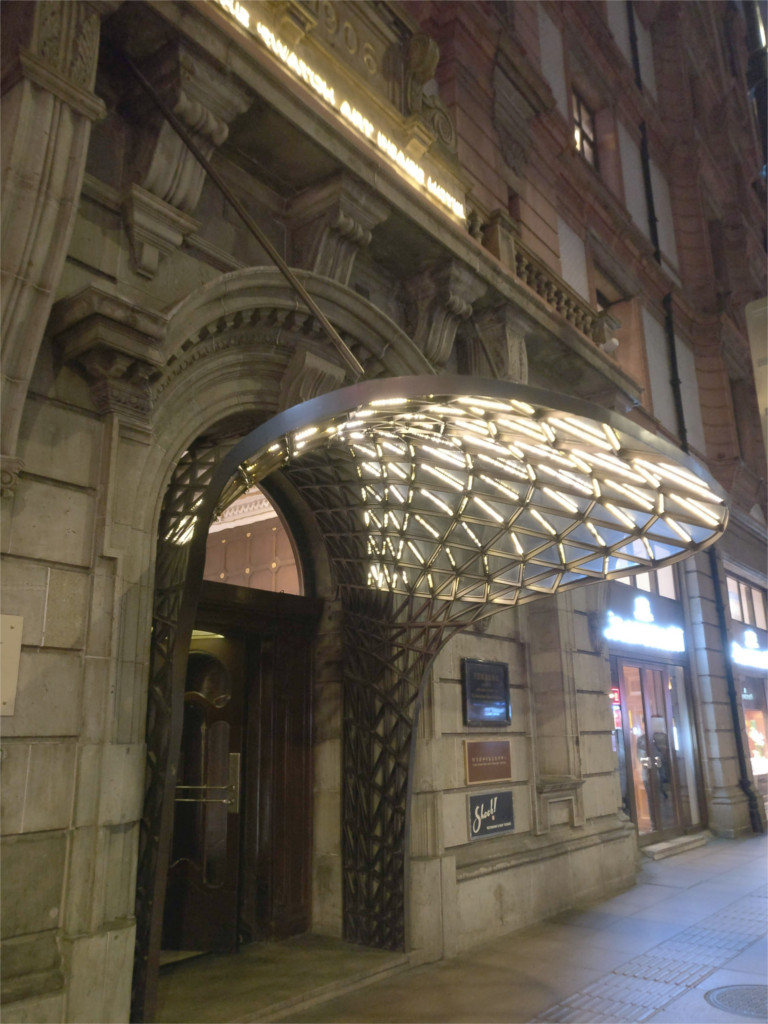 The most famous of his properties is the one originally called the Cathay Hotel, and now the Fairmont Peace Hotel (featured photo). Sometimes called the Sassoon House, this first high rise structure in Shanghai was completed in 1929. The Art Deco building has a granite face, and a pyramidal roof on the Bund-facing side. The hotel’s guests included Charlie Chaplin, Bernard Shaw, and Noel Coward (who wrote his play Private Lives while he was here). During the Cultural Revolution the Gang of Four stayed here. When I told The Family about its once-famous Jazz Bar, she wondered whether we should go in for a drink. As we discussed this, she turned and found that we were standing in front of an obviously Art Nouveau structure. This is the southern half of the Peace Hotel, and was called the Palace hotel when it was completed in 1908. 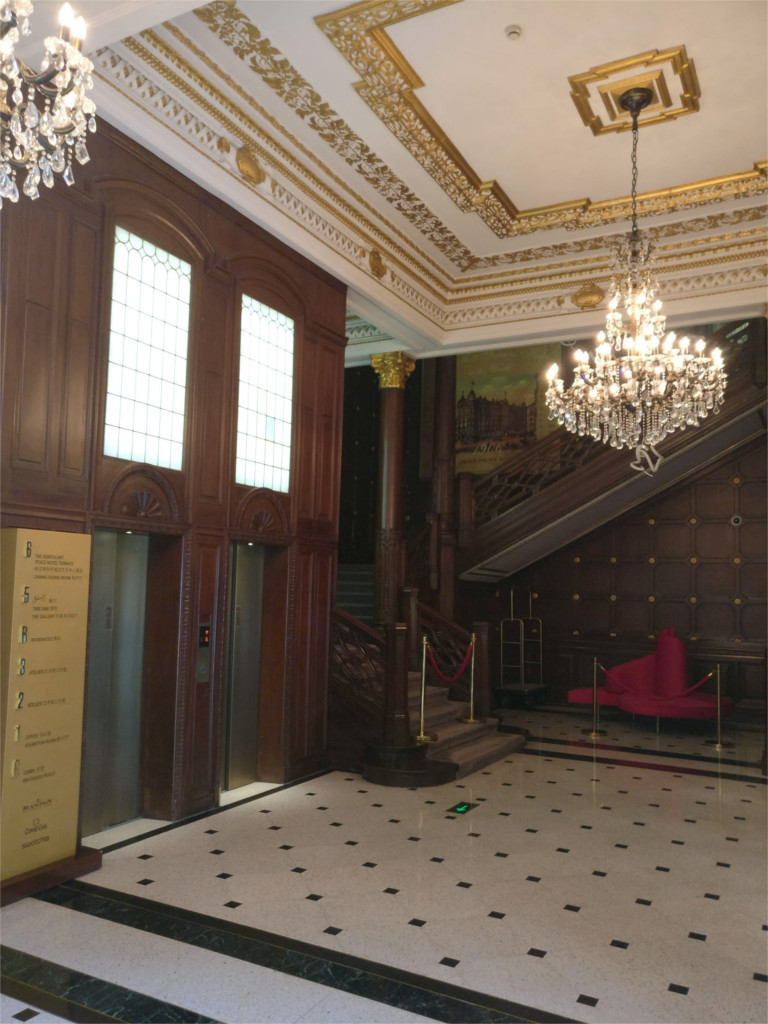 We pushed through the revolving doors into the lobby and took a few photos as a bemused guard looked on. This hotel once had Sun Yat Sen as a guest, and was later commandeered by the occupying Japanese Army. I wondered whether the elevators here run in their original channels. This building, after all, had the first elevators in Shanghai. The mechanism would have been replaced long back, but it is unlikely that the lift shaft would have been reconstructed. We gawped, and then slipped away to the Bund.

As we ate dinner in a forgettable restaurant in the Hackescher Markt, The Family asked what the name of the area means. I looked it up in the source of all misinformation and found that the market is named after the Count von Hacke who had a hand in the building of the market some time in the 18th century. Through the next centuries the area became associated with Jewish merchants and French Huguenots. 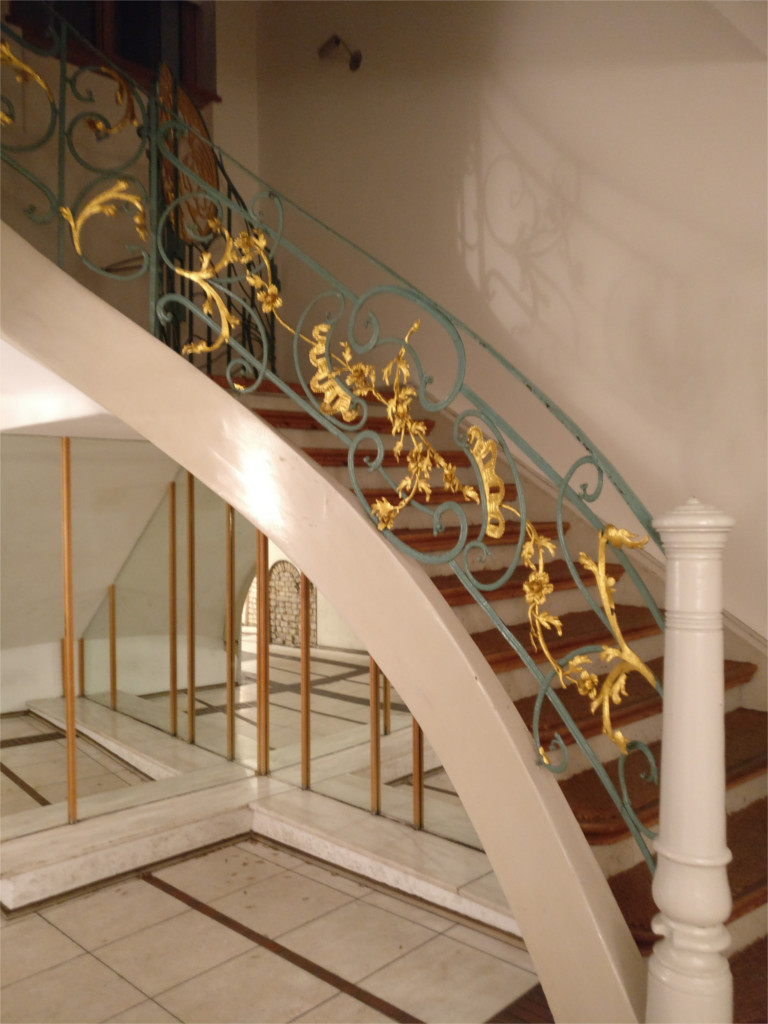 The courtyards, called the Hofe, were probably established around the middle of the 19th century. In 1906 it was bought by the property developer Kurt Brandt, who entered into a partnership with the architect August Endell to redevelop the interlinked complex of eight courtyards. We entered through the 5th courtyard and saw the magnificent Art Nouveau style staircase whose photo you can see above. I think this was in the courtyard called the Rosenhofe.

We wandered through one courtyard after another, having to backtrack now and then. Early tenants included an Expressionist poet’s society called Der Neue Club (started by Kurt Hiller, and whose members included Else Lasker-Schueler, who was then married to Endell). Later, after the war, a tenant’s association resisted an attempt to remodel the Jugendstil architecture by Endell and took over the maintenance as a cooperative. Restoration of the hofe started in 1995, and is now complete. 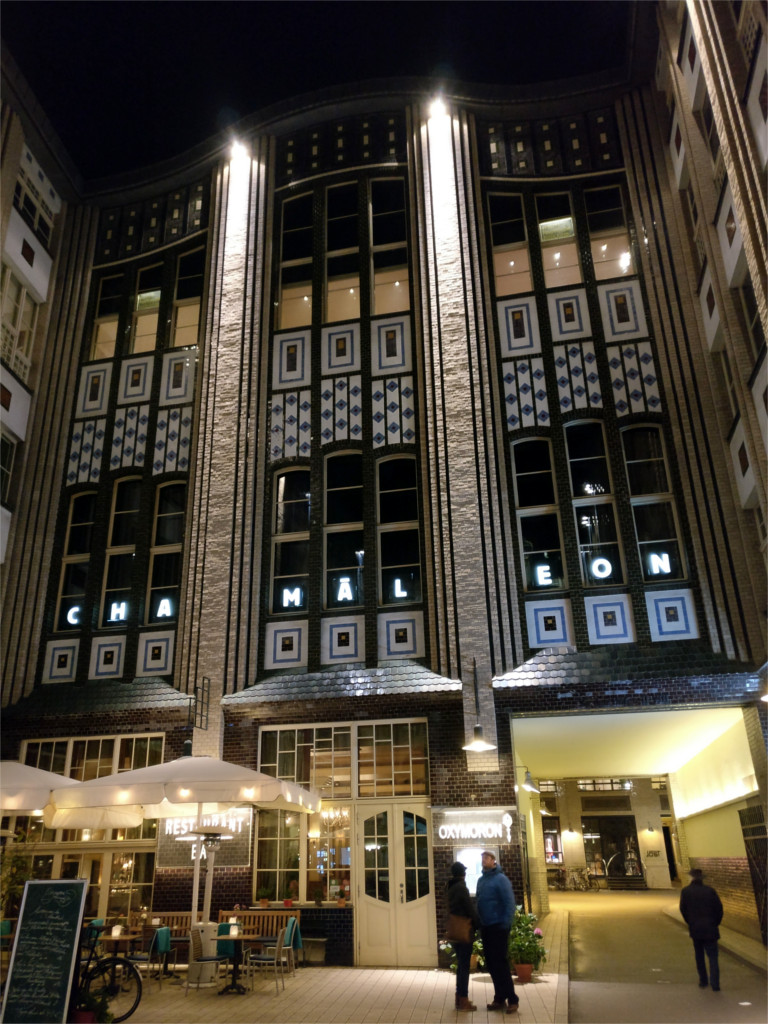 We exited through the first courtyard, whose original ceramic tiles were designed by Endell. It has been restored (photo above) to show off beautifully the soaring lines characteristic of Art Nouveau. We stood and admired it for a while. There is an restaurant right at this entrance. We looked at the menu and wondered why we hadn’t thought of coming here earlier in the evening.

One of the museums in Lisbon which I’d read a lot about is the Calouste Gulbenkian museum. Gulbenkian was a British oil magnate of Armenian origin who died in the middle of the last century. During his lifetime he kept his enormous art collection in his house in Paris. Although he donated many pieces to the British Museum and the British National Gallery, a significant part of it belongs to the museum in Lisbon.

The museum is housed in a stunning building which blends superbly with the surrounding gardens. The details of the design of the complex are described well in Wikipedia. What is difficult to convey is the aesthetics of the building. When you walk through the park and arrive at the entrance to the museum, it seems completely natural to skirt a duck which has settled near the door.

One circuit of the museum takes you past Islamic art as well as antiquity from Mesopotamia, Egypt, Greece, Persia and Rome. The Egyptian section is small but has a few stunning pieces. The Greek collection is remarkable: see the three examples above. The Islamic arts section gives possibly the best overview of this period among all the museums I’ve seen. 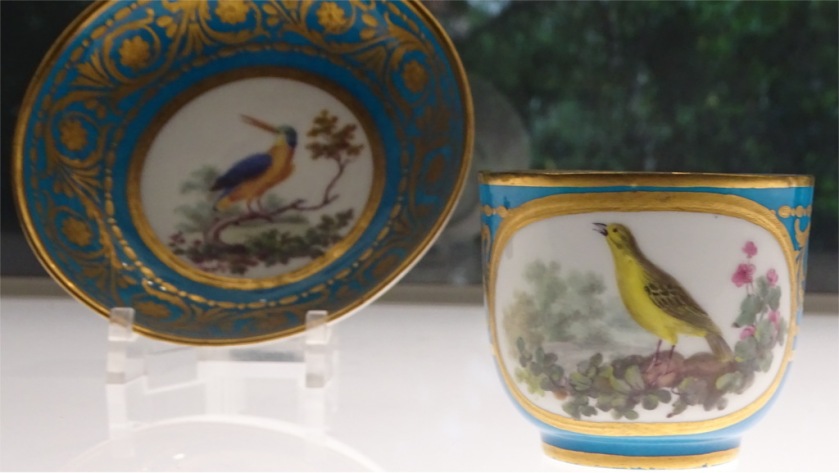 The second circuit contains European art. After you see a Franz Hals, a wonderful van Dyck, a couple of Rubens and a Rembrandt in close proximity, you can wander in a daze through the rest of the museum. I woke up only when I reached the gallery of French furniture, mainly gilded Louis XIV and XV. I remembered my camera only when I saw the plates above. The collection ends with Art Nouveau and Deco. The Family and I left the museum talking about this alternate modernism which now only appears in a certain kind of science fiction movie. 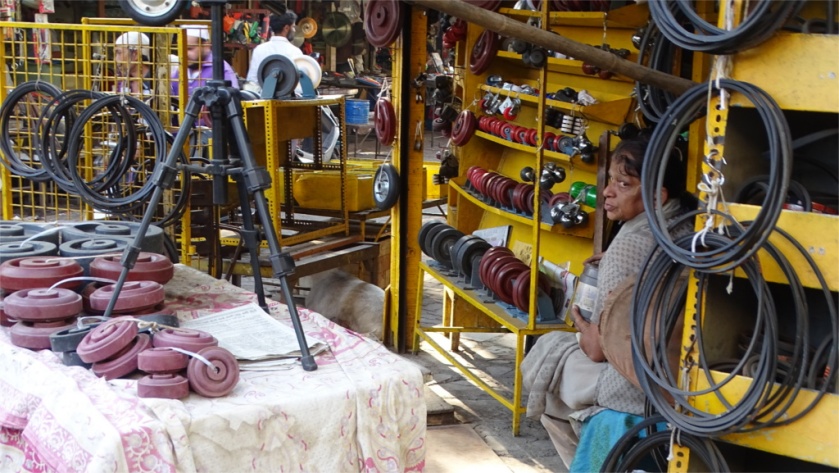 An off-beat walk that one can do in Mumbai is to stroll through Chor Bazaar. To get there, follow Mohammad Ali Road until it crosses S. V. P. Road (Sardar Vallabhbhai Patel Road, if you are a pedant), then go westward along S. V. P. Road and turn into Mutton Galli.

Why chor bazaar should displace the mutton vendors whose galli they sit on is a topic ripe for urban historians. But the moment you turn into the road you know from the bizarre collection in each shop that you can be nowhere else.

One of the first stalls that I saw had used fans of all descriptions: exhaust fans, pedestal fans, table fans, and ceiling fans were what I recognized. The two young men selling these things were not averse to being in a photo. Further down was a bright yellow shop which sold any variety of hardware. I spotted a camera tripod standing in lonely majesty among polishing wheels.

If chor bazaar was really a den of thieves anytime, that must have been long ago. It is rapidly gentrifying. A couple of turns later we came across a section of the bazaar which looked like a supply store for films. There were period object: empty tins of Cadburys from the 1950s, an empty cigarette tin of the same vintage, even some tins of patent medicines which could easily have been used by Sadhana in one of her movies.

Further along there was a small store selling vintage advertisements. When you looked closer they seemed like today’s idea of the 1960s. Could they have been real? It would need research to establish it either way.

We walked on and came to the section of the market which sold furniture and light fixtures. The furniture vendors were quite clear about which of the pieces were reproductions and which were new. Perhaps this depends on whether you know wood. Ten years ago I’d seen a genuine Art Nouveau piece, a tiny shelf with an asking price which was a touch more than I was ready to pay. I still regret not bargaining for it.

Today I saw an imitation Art Deco piece made of the right wood and materials, but looking too new. The price fitted my evaluation.

In a nearby shop I had a long chat about an Art Deco bar which seemed to have been made to the specification of an eccentric Parsi gentleman. Apparently much of the older furniture which reaches the market today is sourced from the estates of Parsi families.

It was getting very warm by now. The two days of winter in Mumbai are over. I looked across the lane from the furniture shops and saw a tiny stall which seems to specialize in lamp shades. The shopkeeper was taking a siesta. It was good to take the hint and bring the walk to an end. 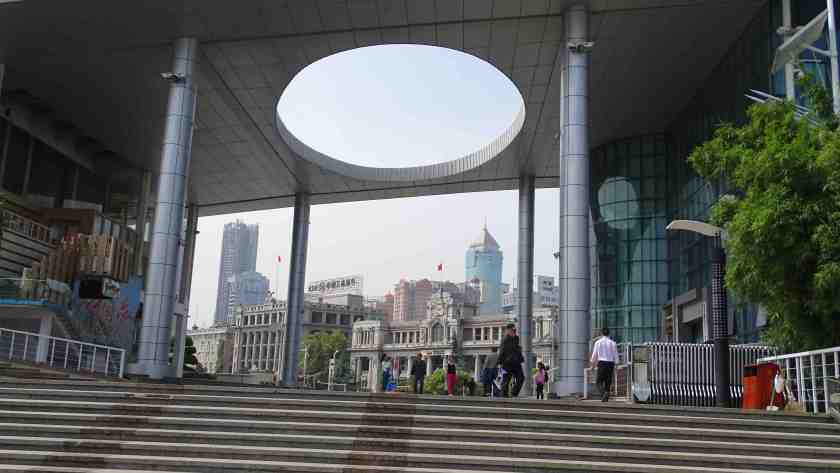 Wuhan is a sprawling town which incorporates the three former towns called Wuchang, Hanyang and Hankou. Wuchang is famous for the revolution of 1911 which overthrew the Qing dynasty and eventually gave rise to Kuomintang China. Across the Yangtze river from Wuchang is the square mile of Hankou which was ceded to foreign powers by the 1885 Treaty of Tientsin. I went to see the Wuhan Bund which was built as a flood-protection measure on the Hankou side of the river in 2005. While exiting the Bund on to Yanjiang Dadao, I noticed that there seemed to be several Art Deco buildings on the other side of the road. In the photo above you can see the former Hong Kong and Shanghai Bank right in the center. In the photo it appears in front of the tall blue tower called the Jiali Plaza, once the tallest building in Wuhan. Next to the HSBC bank is the old National City Bank of New York, now the ICBC Bank. These two buildings are flying the Chinese flag.

I crossed the road and realized that the massive building which was once the Port of Hankou was also an Art Deco structure. You can recognize it in the clean curves you see in this photo. I wish I could read what’s written on the facade; I’m still unable to read calligraphic Chinese writing. Other parts of the port have the straight lines and curving flares typical of this style. The discovery of Wuhan’s Art Deco past was a bit of a jolt. I had very little time to explore it. I continued walking away from the Bund and towards a building that I later realized was the Old Customs House. At the street level, shops had put up their own facades, but if you looked higher you could see several buildings with tell-tale Art Deco lines and trim. I was amazed. This part used to be the old British Concession, and I’d expected the heavy late-Victorian architecture of the late 19th century, not the light and playful Art Deco of several decades later. Afterwards, when I thought about it I realized I should not have been surprised. Even in Mumbai there is a mixing of these two architectural styles.

On my ten minute walk I also saw Art Nouveau in many places. One example was this neglected gate: the superposition of the playful vines on the straight lines of the grilles is a lovely piece of Deco. This was almost my last discovery. My walk ended at the Customs House, and the Social Realist style statue nearby commemorating the city’s protection from floods. I realize now, while browsing the net, that this period of Wuhan’s architecture is well-known but ill-documented. Certainly the neglected gate above, with its mixture of Art Nouveau and Chinese styles is an unique, but unremarked heritage. When I go back I must devote more time to exploring this area.