We came into Muenster on a rainy Sunday in November. Muenster is usually very lively, but Sunday is a bit of an exception. Many things are closed. When we came to the beautiful building called the Erbdrostenhof, we found that it was closed. This is the work of the master German baroque architect Johann Conrad Schlaun. The building was completed in 1757. My first reaction to it was that it was much smaller and cramped than I had imagined it to be. 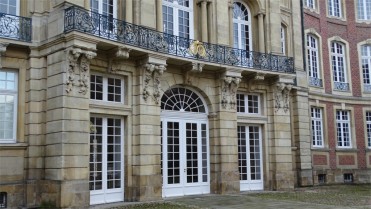 I first saw the door, but then the details below the balcony caught my eye 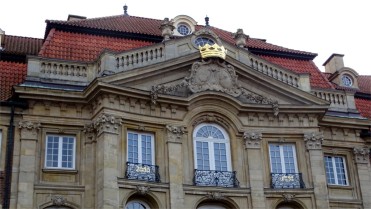 I liked that curved triangle behind the crown 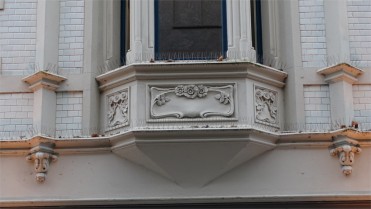 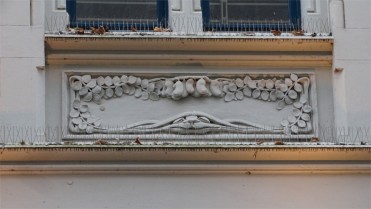 Lovely details on that panel. 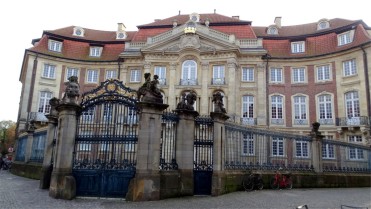 Erbdrostenhof was closed when we came to it 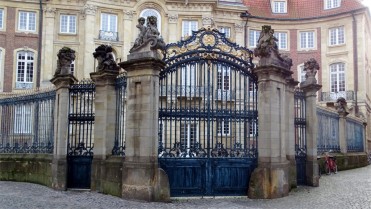 The closed gate impressed me

The Family and I admired the three-winged building from outside the closed gates. The central facade is of sandstone, and the two side wings is faced with red clinker. These and the quartered windows are characteristic of the buildings that Schlaun designed. Unfortunately, since the building was closed, we could not go in to see the ballroom, which is supposed to be a marvel of restoration. We walked around to the back, but the walls there were high and did not let us have a good look. I guess we will have to go back to see this again.

Just behind Bebelplatz and looking on to it is a small church which I’d never entered before. The foundation stone of St. Hedwig’s Cathedral was laid in 1737 on land donated by Frederick the great. It has the distinction of being the first Catholic church built in Prussia after the reformation. We hesitated a bit: did we want to walk on, or go in here? The cold nudged us to make up our mind: in was better than out.

Every round and domed building in Europe reminds me of the Pantheon. The pediment certainly speaks of a neo-classical design. When I stepped back, a guess based on the unaided eye indicated that the imaginary sphere made by continuing the dome downwards would touch the floor. This is the proportion of the Pantheon. The story is that Frederick the great made a sketch of the church, and von Knobelsdorf designed it following this, immediately after he’d designed the Opera next to it.

I took a closer look at the relief work in the pediment on my way in (photo above). If that is not baroque then I will eat the grapes the cherubs are playing with. I don’t know the legend of the Silesian saint Hedwig well enough to tell whether the relief involves her life. Inside the church one can read a little bit about the history of the structure. I was not surprised to learn that the church had been destroyed by bombing in 1943. The story of its restoration in 1963, when it stood in the former East Germany, by a collaboration between architects and artists from East and West Germany was a complete surprise. As much as when I’d first heard that the bishop of Berlin, whose seat this was, denounced the murders and vandalism of Kristallnacht. Predictably, he was hauled off to Dachau.

We sat inside for a while and listened to part of an organ concert. The church has great acoustics. The organ, built by Klais of Bonn, was installed in 1978. This was a replacement of the organ which was destroyed in the bombing. Apparently there are almost 5000 organ pipes, made of wood, copper and tin. The sonorous notes followed us as we went back out into the cold.