We drove from the town of Chamba down to where the old town of Tehri lies now under the lake behind the Tehri Dam. The road came close to the Bhilangana river just before it meets the Bhagirathi. The dam is on the Bhagirathi river. The calm water of the lake contrasted with my memories of the tumultuous days of 2005 when the last protesters were being removed by force from the town as the water began to rise. I have a faint memory of TV news showing the very last protesters on top of the clock tower at the center of the town. Nitin, who was driving our car, said that the tip of the clock tower can be seen in the middle of the lake when the water level dips.

We were at the upper reservoir, behind the rubble filled dam. The road went around the lake, past a yard with concrete and iron ferrules either left over from the construction, or held in reserve against future needs. They were immense, a little higher than a man’s height. The lower lake lies about 25 meters below the level we were at. The dam eventually plans to generate 2.4 Gigawatts of power, and the water is supposed to be released for agriculture. The protests against its building had multiple reasons, the drowning of a historic town, founded by the kings of the Tehri Garhwal kingdom being the most emotional. But also along with these were powerful arguments against creating a dam in one of the more geologically unstable parts of the Himalayas, and the impact on the ecology of the lower Himalayas.

Nitin pointed out the foundations of houses which have collapsed in the rising waters. I realized that we were standing on ground which was made of pulverized concrete overlain with years of silt carried down by the waters. I don’t think I’ve ever seen so much grass growing over concrete. Nitin was from this region, and he would have been a child when the protests against the dams were in full swing. He seemed torn between memories of his elders strongly against the dam, and his own adult life, after the dam. His conversation was full of gaps, little spots of history lit up. The dam is accepted today as a fact, but with a little resentment. We left the banks of the lake and began the climb up to the town of New Tehri.

As the stay-at-home spouse, I was quietly envious of The Family when she sent me photos of her journey to the Kedarnath range of the Garhwal Himalayas. I especially loved the featured photo. The last line there seems like wishful thinking; highways are arteries through which plastics circulate in nature.

But to start at the very beginning, The Family sent a string of photos of these metal sausages by the road. Why were they there? No one around her knew, but they were nicely painted. There were deer and birds. These spotted owlets were really nice.

The weather was strange, and the light through the clouds was an odd yellow which made this tree stand out. I think at this time they were still fairly close to Dehra Dun, on their way up to the Alaknanda. 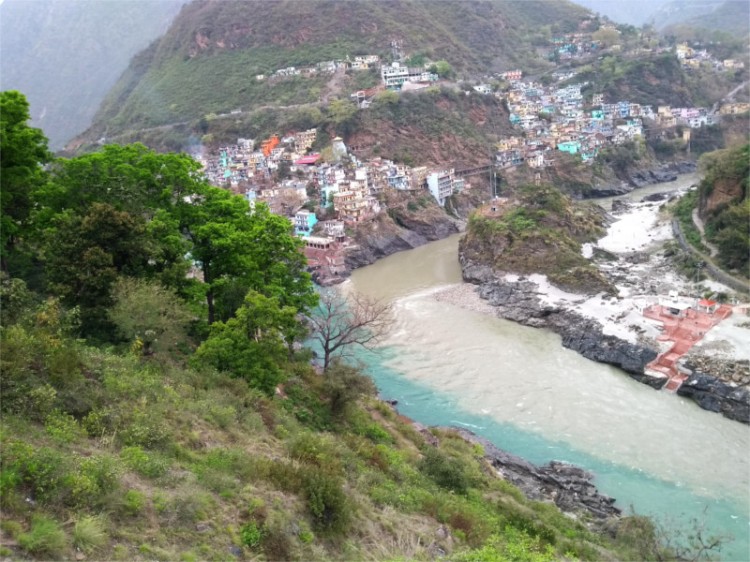 Around midday she must have passed Devprayag. The blue waters of the Bhagirathi and the brown of Alaknanda rivers join at this point to become the Ganga. A quick explanation is that the dam at Tehri upstream on the Bhagirathi allows the silt to settle down, so that by the stream that arrives at the Devprayag is blue. But this otherwise convincing reply is wrong. As an observant blogger pointed out, the colours of the streams change with season. 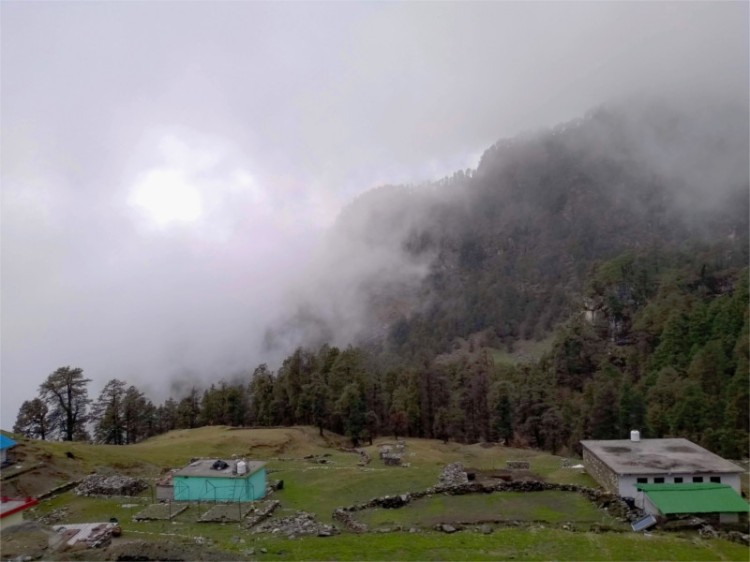 The photos from further up are gorgeous. The Family complained about the cold; it was past mid-April and the temperature on some days went down to nearly freezing. Sitting at home in warm Mumbai I enjoyed the photo of fog rolling down the Himalayas much more than she did. Disappointingly, she never had the views she expected of the Nanda Devi (7.8 Kms high), Trishul and Chaukhamba (both 7.1 Kms high) because of the clouds. This winter has been severe in the Himalayas, due to the same disruption of the polar vortex that gave the USA a record winter. If it weren’t for that, the second half of April would be a wonderful time for these views.

And now, in the middle of April the Rhododendrons were in full bloom, finally. In the last few years we’ve gone too early in the season to see this flowering. I was happy to get a lot of photos of these upper meadows around Chopta, at an altitude of 2.6 Kms above sea level. The Family was very happy with the flowers.

We stopped at a little roadside eatery above the Tehri Dam. The view was magnificent, and we climbed to the terrace on the roof of the structure perched right at the edge of a slope. We’d ordered chai before climbing up to the roof, and it was ready by the time we came down with a few new photos. There was a stop for buses right at this corner. Some people got down from a passing bus and came into the restaurant for food.

The Family asked “Shall we have lunch here?” It was a pleasant place, doing good business, so why not? We sat down at a table looking out over the Bhagirathi river and ordered a paratha each with sabji. Food always tastes brilliant once you have passed the 1500 meter mark above sea level. This was no exception; the parathas and the simple alu gobi tasted so good that we decided to share one more. We wouldn’t have done that at a lower altitude, I think.