When you think of Kaziranga, the picture that comes to mind is of rhinos grazing peacefully in open grasslands. This is true. But many other things are also true. There is a lot of water, which hides rare otters and turtles. There are trees and forests. In fact, the silk cotton tree is a pest which is threatening to take over the grassland. There are elephants, swamp deer, tigers, wild pigs, and hog deer. 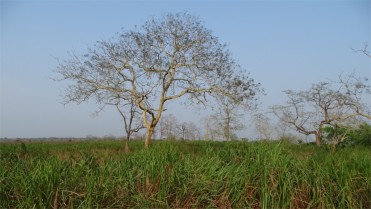 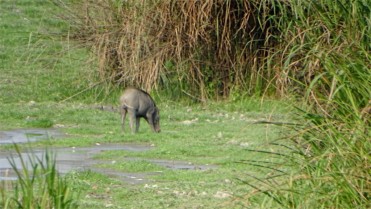 A black-necked stork in flight through grass

Hog deer at rest in grass 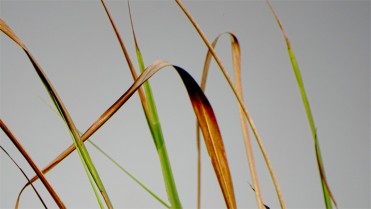 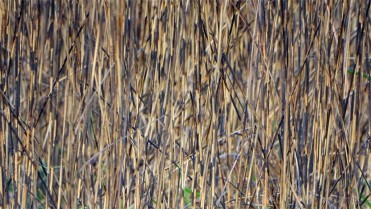 Grass is periodically burnt to preserve the ecology

The gallery which you see here is a little kaleidoscope of images from Kaziranga, each featuring grass. Click on one and scroll through for a larger format, if you wish. 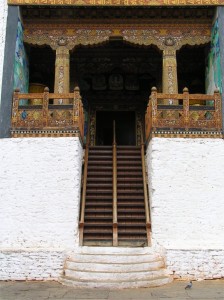 Across the Dirang river and over the hill that we could see from our hotel room is the Sangti valley: famous as the wintering spot for the endangered black necked crane (khroom khroom karmu, ख्रूम ख्रूम कार्मु). Before starting on our journey I’d found that it arrives in early November. We should have been able to see it in a normal year. But this is a high El Nino year; the weather is warmer than normal. Vikram, who manned the reception in our hotel, more or less said that we were out of luck. A decade ago we’d missed them by months in Phobjika valley in Bhutan. In any case, we started too late for birding.

Avatar Singh had never gone to Sangti Valley before, and he was petrified of losing the way. Vikram explained the route to me, and then again to Avatar. It was easy: reach Dirang bazaar, turn left and down at the main cross road, turn hard right immediately, cross a bridge across the river, turn right and go on. Contrary to Avatar Singh’s fears, this was not a gritty adventure. We drove over a smooth black-topped road to Sangti valley in less than half an hour. The Family spotted a grandmother with a child and asked her about the cranes. As she told us they hadn’t arrived yet, I took a photo of the pair. See the stacks of firewood behind her? We found every house in Arunachal has huge stacks of firewood hoarded up for the winter.

We drove through this village which straggled through the long valley. The road was a little way up on one side of the mountain, above a sudden drop to a very flat valley. Maybe the river floods in the monsoon; that could be one reason why the people here cultivate and eat rice. We drove past the village to a chhorten at the far end. The Victors took their usual record shots posing in front of the chhorten. We turned back towards the village.

Buddhist prayer technology was everywhere in the valley. There were many of the small square stupas along the road, with tall prayer flag fixed on poles near them. We came across this collection of prayer wheels called a mani. When I read the inscription on it, I realized how deep the conviction in nirvana went here. This was a little glimpse into an aspect of belief that one doesn’t usually discuss with strangers.

As we got to the village, I hopped off the car because I wanted to take photos. I agreed to meet the others across the river near the bridge we’d seen. My first stop was to photograph this family group as they separated the chaff from rice. My attempts to talk to them were not successful. They lived too far from the road to understand either English or Hindi (if the idea had struck me then, I would have tried Assamese or Bengali). Further on I met a bunch of teenagers sitting and chatting at a store. They understood my request to photograph them perfectly; the girls refused and the boys posed as if for a fashion shoot.

A typical village house looked something like the one above. Most of the living seemed to occur on the upper floor. The lower was reserved usually for firewood. The living space and as much front space as is available is covered with flowers. The flowers and the beautifully chosen colours on the walls made the whole village look very picturesque. The need for a two-storied house was not clear to me: the valley is low (maybe a little over 1000 meters high) and snow should not be an issue. The village was raised so far above the river that the danger of flooding was non-existent. Could it be that the style in housing was brought by the locals from a higher altitude as they wandered down?

I passed through the village and found the road leading down to the river. Avatar was napping in the car parked by the road. I followed my fellow travelers on foot. The village was less picturesque along this lower road, although the houses were larger. Children were at play all the way to the river. As I came to the bridge a group of three young girls came tripping across it. They were willing to be photographed; they formed up in a row and smiled for the camera. The Victors and The Family were waiting for me at the edge of the water on the far side. I walked down there and dug into a backpack for an apple. The sunlight was warm, although the air held a chill.

The Victors wanted to get back to the car. The Family and I followed them slowly without exploring the river. On the way back we saw a bunch of boys playing together. They agreed to be photographed. But the gender difference was stark. As you can see from the photo above, they were not going to sit still for a photo. They tried out various poses. I especially like the child in the middle, who’s got distracted by what he can achieve with his fingers. We got back into the car and drove out of the valley. We had hardly seen any birds; in fact we’d hardly stopped for any. On the road we found a couple walking: one with a large scope, the other with a camera. I stopped the car to talk to them. They were from Spain and were there to look for ibis bills and other water birds. Clearly we had missed out completely.

The Family and I want to go back to Dirang and Sangti valley, perhaps late next November. We are now officially in search mode for a pair of birders who might want to join us.