I know very little about spiders, too little to be able to identify species except by doing image searches on Google. The one in the featured photo is probably a signature spider (Argiope anasuja). Notice the paired legs delicately touching strands of the web, waiting for the tell-tale vibration when some prey blunders into it. Those four zig-zag elements on the web are called web decorations. It seems that their purpose is not known. That leaves me free to speculate. My guess is that they act as springs, isolating vibrations from the body of the spider and the rest of the web. Someday I will have the equipment with me to test out this hypothesis, or at least to measure whether these fat coils of silk have anything to do with vibrations. I saw this one near a forest guards’ colony outside Kaziranga. They are common in gardens in small towns and villages. 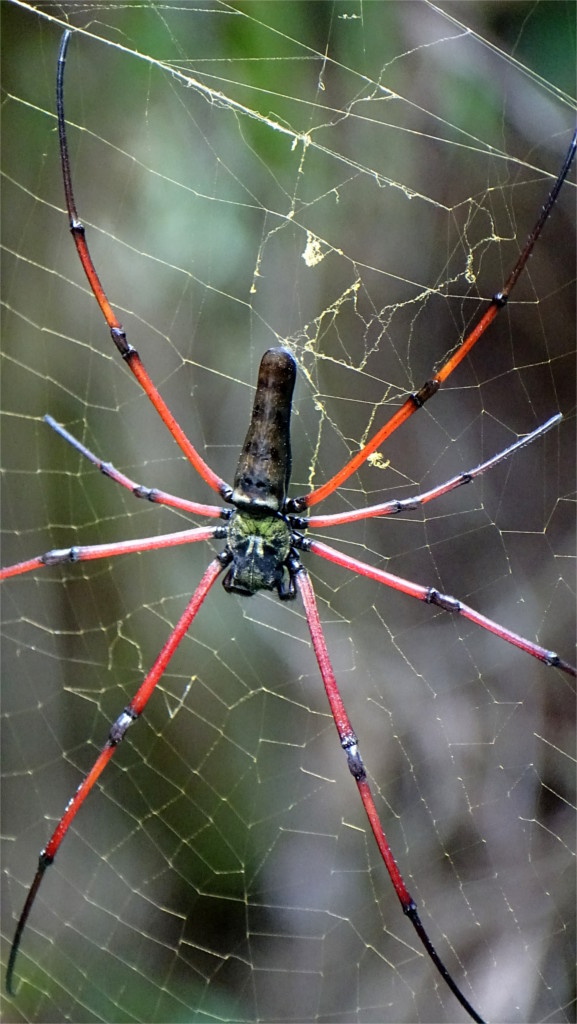 The next three are definitely wood spiders. I saw them on a walk in the Hollongapar sanctuary. They sit quite differently in their web. The eight legs are well spread out, and the web itself is less organized than the previous one. They are all called golden orb weavers (genus Nephila) because of the clear yellow tinge to their silk. The webs look untidy; I wonder whether some of those hanging pouches are egg sacs. The one in the photo above is called the black wood spider (Nephila kuhlii). 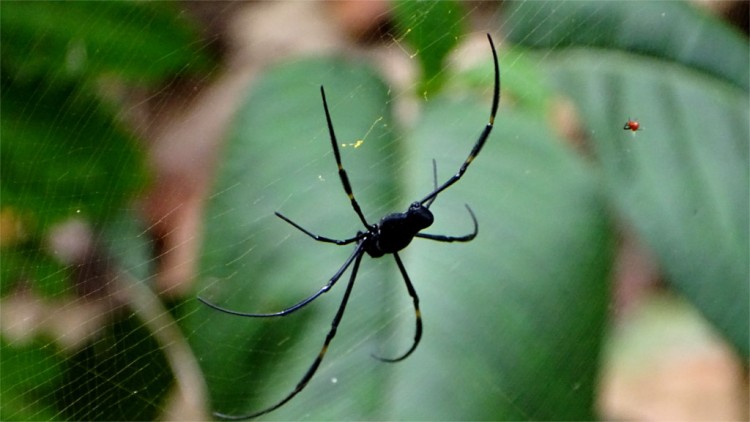 I cannot identify this, but from the yellow colour of the web, I suppose it is also some species of Nephila. Wood spiders have extreme sexual dimorphism. The tiny orange dot that you see in the web above is a male. There are usually several males hanging about on each female’s web. I haven’t seen them mating yet, but I guess I’ll need to have a macro lens on if I want to take a photo of the act. Another common feature of all these spiders is that their webs are roughly at the height of your eyes. This makes them easy to see, but also easy for animals to run into.

The photo above is definitely of the Nephila pilipes. I’d first noticed this in Japan, and since then I’ve been seeing this species in all parts of Asia. The web is highly irregular, and the spider sits off center. You can see that the silk has a tinge of yellow in it. This colour is the reason it is sometimes called the giant golden orb weaver spider. Strangely, it is not much larger than the other golden orb weavers whose photos you can see above. Still, a rose by another name …

Let me round this off with something that is definitely not a wood spider, although I saw it on brightly painted wooden post inside Kaziranga forest. I think this is a crab spider. The number of crab spiders is so enormous that a bunch of hobbyists could spend their lives just looking at them. I guess this is why there are no spider enthusiasts; you can spend your life traveling to look at spiders all over the world, be successful at that, and never come close to seeing all.