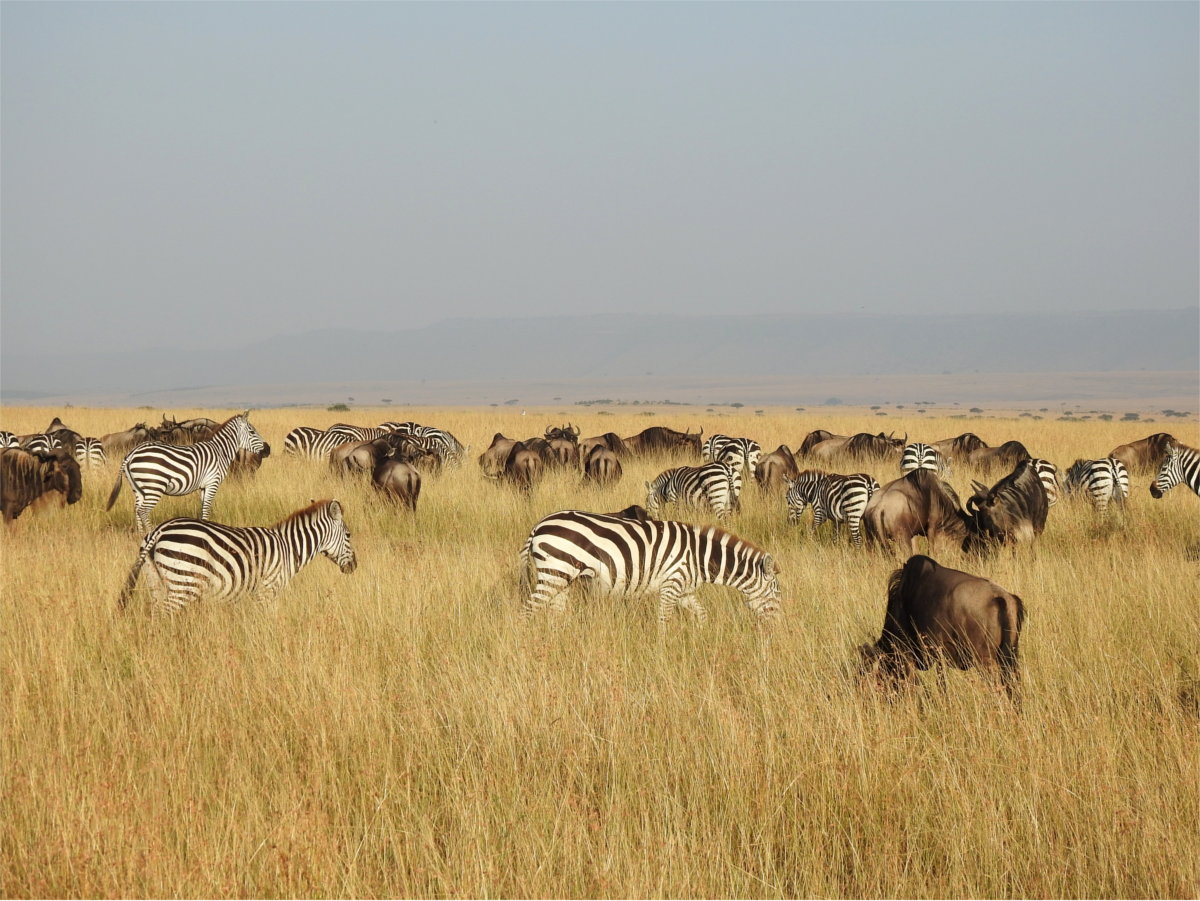 Sunrise in Masai Mara shows the seemingly unending plains, with thousands of blue wildebeest and plains zebras grazing together. I want to be traveling again. A series of place names run through my head as I see these old photos. This image should do nicely for the announcement that I will take a blogging break for a couple of weeks. Things that I postponed for a year need to be done. In the last five days I have not been able to connect to around a third of the blogs that I tried to visit. I hope this glitch is fixed by the time I am back.

The famous opening phrase of L.P. Hartley’s novel, The Go-Between, came to mind when my photos app reminded me of where I was a year ago: Maasai Mara National Reserve in Kenya. The phrase was apparently first used by Hartley’s friend, David Cecil, in a lecture in 1949. We all plagiarize our past, and I am nostalgic enough about having lived in that foreign planet where travel was easy, to post this video today.

Tourism made up approximately 10% of Kenya’s GDP in the past decade, with some year-to-year variation. The shock that COVID-19 has had on travel however will have much wider impact than this number suggests. According to a study commissioned by the World Bank it’ll impact the net earning of the rural poor by almost 15%, of the government by about 10%, and of enterprises by a number more or less midway between these. These huge impacts are similar to what is happening across the world.

Today we take a day off from keeping house. We’ll eat what’s in the fridge. We’ll break out a bottle of Burgundy that had been saved for a day when we feel like resting. We will watch movies, and lose ourselves in the memories of trips we had made in the past. 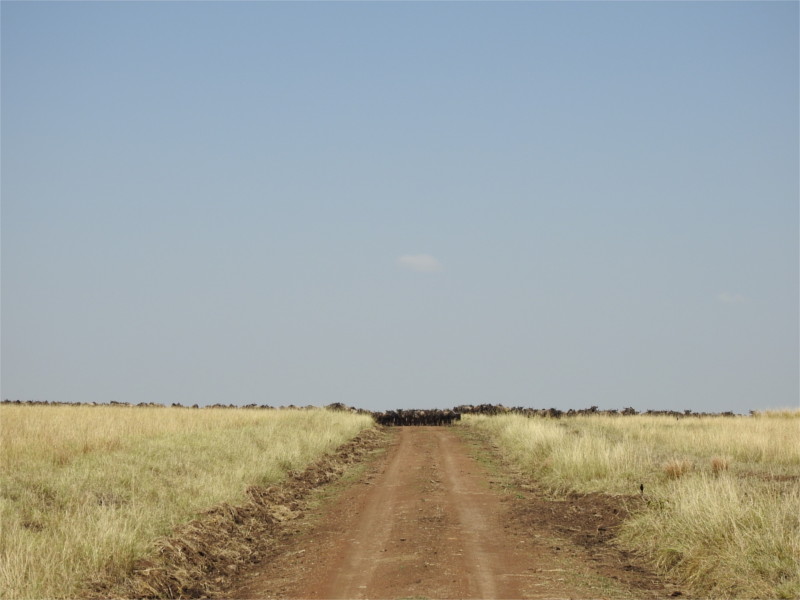 A lot of wildlife watching is a matter of luck. You can try to bias the dice in your favour by various means. Our guide Stephen had kept the radio on, and was listening in on conversations between Landrovers across the Maasai Mara, hoping to pick up pointers on which way to go to see something interesting. As he sped along, I saw a weird line across the horizon.

You can see how it developed. Sometimes the dice come up sixes for you, and you get to see something you had never even heard of.

Our rush back to breakfast was very rudely interrupted by this zebra who mooned us. I consulted The Family and Stephen, and we agreed that this kind of disrespect should not be ignored. We stopped and took photos for the record. Yes, Zebra, we have warned you.

The rest of the large mixed group of wildebeest and zebra paid us no attention. I’d found that they do not mind feeding together because the finicky wildebeest strips leaves off the grass, and a zebra is happy to eat the sheath and the stem. Also, the more of them there are, the longer each can spend in eating, since just a few pairs of eyes are enough to keep watch for potential danger. You’ll notice in the photos that while most heads are down munching, there is always one head up and looking.

We stopped to let a herd of wildebeest cross the road in front of us. Wildebeest are skittish creatures. They were crossing for a while before we came along, but a few began to hesitate when they saw us. Others kept crossing, and eventually the warier individuals figured that we were unlikely to harm them and stepped on to the road.

There was a ditch on either side of the road. The gnus would tumble down one, halt, and then slowly amble across the road. As they came to the other ditch, they would spring across it. Muscles in humans, and other mammals, come in two types: slow-twitch, also called type I, and fast-twitch, called type II. A springing action requires fast-twitch muscles. At the time that I started trying to lose weight, I learnt that some type II muscles must be exercised to use up glycogen stored by your liver, and type I muscles must be used a lot to burn fats that your body has stored. That’s the difference, my trainer explained, between aerobic exercise and intense short duration exercise.

These leaping gnus were using their fast-twitch muscles. I was fascinated, and snapped off a long series of shots. You can see that their hind legs are nearly stationary as their forequarters go into motion: that’s why the back legs are in focus even as the front of the body is blurred by motion. Blue wildebeest weigh between 250 and 300 kilos, so these muscles must be fantastically powerful. I came across a study of muscle chemistry in the related black wildebeest (Connochaetes gnou) which found that their fast-twitch muscles have highly efficient structures able to do anaerobic exercise much better. That explains these leaps.

Once they are spurred into action, the gnus don’t stop running. I’d seen that earlier during their river crossing, and now I saw a minor stampede again. The survival tactics behind this is clear, but is it really good for the animal in the long run? The Family and I had been talking about the stress hormones that must be flooding into a gnu’s body all the time, and asking ourselves whether they shorten its life. It probably does, because gnus seem to live twice as long in zoos as the oldest ones seen in the wild. But still, this kind of extended running requires very efficient type I muscles, and that is exactly what this paper reported. I was right in paying so much attention to wildebeest, they may look like jokers, and behave like them, but they are champions. Raj Kapoor would have understood this.

Some mornings should be quiet. You should be able to gaze at far horizons in the mellow sunlight, and clear your mind to meet the other.

And me? I prefer to have my feet on the ground and a camera in my hand.

The morning light was now superb: the kind where even a stained trash can looks wonderful. And instead of such mundane subjects I had before me a bunch of wildebeest, intent on feeding. Wildebeest and zebras can feed together because the picky wildebeest takes only the leaves of grass, whereas zebras don’t minding picking up the less nutritious sheath and stem. This pickiness is also the reason why wildebeest have to keep moving with the seasons.

What was that on the back of one of the gnus? I cast about for the name; yes, an Oxpecker. My night of reading was coming in handy. There were two varieties and I had to figure out which. The beasts were far away, and I had no tripod. I would have to zoom out as much as I could with my pre-breakfast shakiness. As I took the photo, The Family had already noted the round yellow patch around the eyes: this was the red-billed Oxpecker (Buphagus erythrorhynchus). Although it has been noticed pecking at open wounds on large mammals, its diet is almost completely made up of insects. Under controlled conditions it has been seen to be extremely efficient at keeping cattle free of ticks. We would later see the yellow-billed Oxpecker (Buphagus africanus). These two species are found in large parts of sub-Saharan Africa down to Zambia. The yellow-billed live largely in West Africa, and the ones we saw are perhaps among the easternmost part of the population. 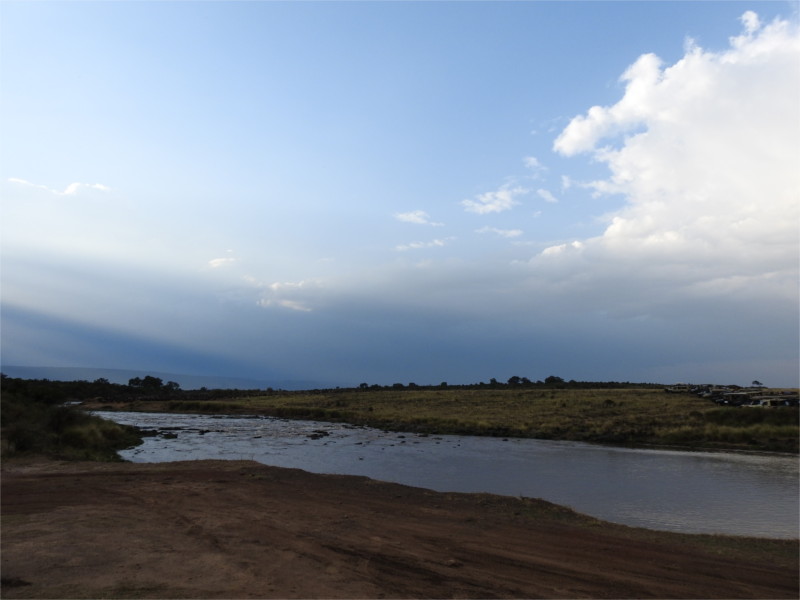 A bend in the river Mara lay a little way down from the hotel that we were in. This part of the Maasai Mara Game Reserve was called the Mara Triangle, and lay pretty far from the main entrance to the reserve. We arrived in the middle of the afternoon, and left for a game drive soon after lunch.

Although we spent a long time waiting for wildebeest to cross the river, an iconic sight, we managed to see quite a variety of wildlife that afternoon. The slideshow above has a selection of what we saw: from butterflies to lions.

“Hurry up and wait” seems to be the perfect motto for wildebeest gathering up the courage to cross a river while looking, literally, for greener pastures. But once they get going everything happens fast; like the “moments of terror” part of the old aphorism about war. We’d spent a couple of hours of wonderful late evening sunlight, testing our patience against that of gnus. When the light began to fail the river crossing began. At dinner that night the story was that a gnu lost its footing and fell into the river, and the herd followed. Whatever it was, the crossing was panicky. Wildebeest thrashed in the water, upstream from a pod of ill-tempered hippos. 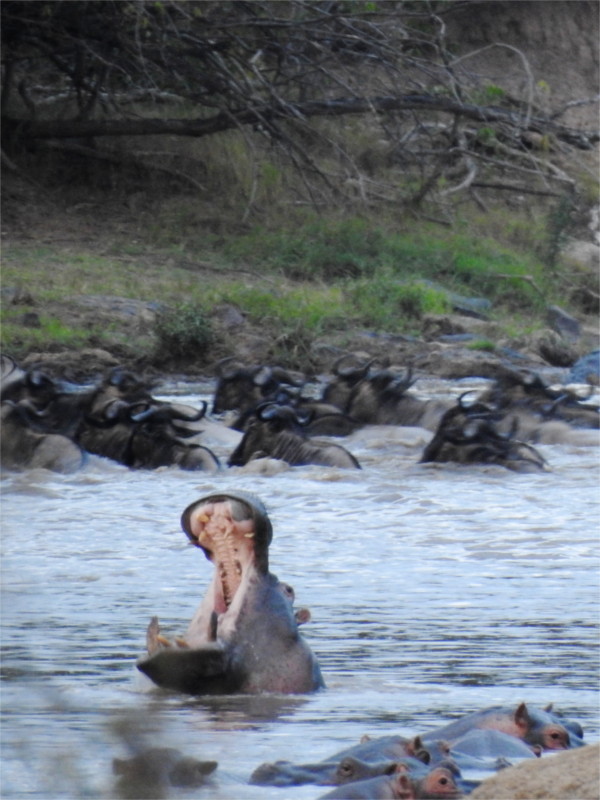 “Couldn’t they have done this twenty minutes ago?” I grumbled as I snapped off a series of shots. As a hippo yawned widely in front of the panicky herd of gnus, I got a photo which, in better light, I would have been proud of. It was all a little too blurry and pixellated to be a great photo, and with the landrover rocking, I was unable to control the camera enough for the long exposure required here.

A panicky herd of gnus is quite a phenomenon. They keep running forever. I think their high-strung temperament must be taking a toll on their life expectancy; in zoos they have been observed to live twice as long as the average in the wild. Nor can all of this difference be attributed to predation. I saw one wildebeest looking around desperately, slowly tracking back towards the river. This uncharacteristic behaviour probably meant that she had lost a calf. It had either been taken by a crocodile or was lost in the stampede.

The rest kept running. Even when they came to the road where our landrover was parked, they wouldn’t halt. They would only change direction and keep running. Panicky, high-strung are too mild to describe what they are. I think they wouldn’t run over a lion and kill it, but they could come close enough to one to be picked off. 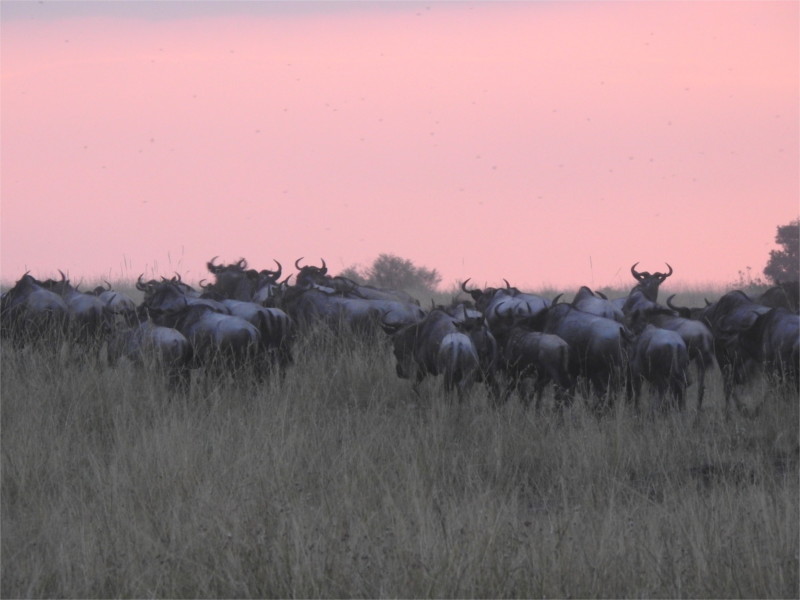 As we saw them running off into the sunset, they kicked up masses of insects which, in turn, brought along several insectivorous birds. This would have been a midnight snack for the birds, since they had settled down almost an hour before. What a chain of events, I thought; that’s part of what a grassland ecosystem means.