We loved Portugal so much that I want to write down every last detail that I can remember. But it is time to move on. So I’ll end with two of the best things about Portugal.

One comes with pictures. The memory of the lovely cakes that we had with coffee or tea will stay with us for a long time. Right from my first experience with queque while waiting for The Family to arrive at the Lisbon airport, on to the ubiquitous custard filled Pasteis da Nata, toasted almond cruezeiro in Coimbra, coconut in the Pao Deus or the Bolo-Rei in Porto, the Travesseiro with its egg and almond filling in A Piriquita in Sintra (photo alongside), to the interesting looking Coelhino back in Lisbon (featured image), the cakes and breads were amazing. This was a discovery, because nothing we read prepared us for this.

Nor were we prepared for the amazingly open Portuguese society. We travel because we enjoy the company of strangers, and like to learn how they live their lives. In every country we come across unexpected warmth and openness from strangers, but sadly, occasional suspicion or even hostility. Portugal is different. There was not a single interaction where we felt unwelcome. The warmth was not only towards tourists. We were also pleasantly surprised by the acceptance of new immigrants. In a world that seems to be slowly turning xenophobic, contemporary Portugal reaffirmed for us what humanity can be.

We’d decided to stay near the Boavista place during our trip to Porto. It is a little outside the touristy part of Porto, but a place which made us feel comfortable. The big sight here is the grotesque memorial to the defeat of Napoleon’s army when it tried to invade Portugal. The triumphal sculpture of the Portuguese lion mangling the French eagle was made by Alves de Sousa, and sits atop a column designed by the local architect Jose Marquez da Silva. There was a little fair in progress around it, and a young girl helped me to take the photo shown alongside by moving the barriers around the column. Obrigado, senhora.

A few paces away is the Casa de Musica, an innovative piece of architecture by Rem Koolhaas. We thought it would be impossible to get tickets for any performance by the National Orchestra, which is housed here. We could have taken a tour of the inside, but, strangely, we could not harmonize our time with this. 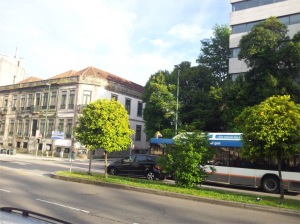 This was an area with few tourists and a lot of local people. We enjoyed walking down an avenue with fruiting orange trees along it (photo here), and also lovely small lanes. We admired the street art around us (photo below). There were shops with fruits: sweet cherries, ripe apricots and peaches, nectarines. There were two bakeries a few paces away from our apartment.

One had the wonderfully named Bolo Reis (King of Cakes) displayed proudly in the window (featured image). We walked in to ask whether we could buy a portion off the loaf. Another customer acted as a translator, and the resulting conversation seemed to tell us that we could only buy it whole. We thanked the baker and the translator and said this was too much for us, and left. We’d hardly gone a few paces when our translator came running after us and told us that we could get a part of Bolo-Rei. Something had clearly been lost in translation. We got our piece of cake, and it was wonderful, even with the filling of squash. Obrigado, meus senhores.

We’d lucked out in choosing a place to live in. Porto is not a place full of grand monuments; it is a place to enjoy living in. We loved the city.